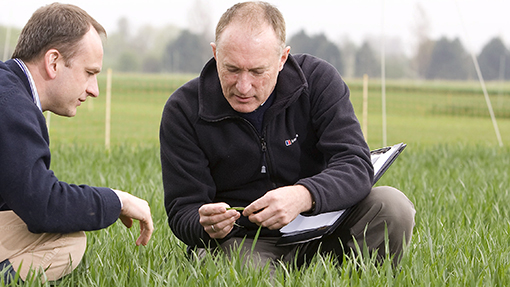 Genetically modified wheat crops are needed now to help in the fight against yield threatening blackgrass and septoria in the face of sliding herbicide and fungicide efficacy.

Velcourt technical director Keith Norman, who is demonstrating the results of various conventional genetic improvement research projects at Cereals 2014, said that people who oppose the technology need to start looking at evidence provided by real science and not that of emotive science.

One increases branching in the ear, resulting in more spikelets and thus grains, while two further genes are responsible for longer and wider grains.

With conventional breeding, getting genes into commercial varieties and to market can take several years, but the advantages of crucial research such as this – designed to drive yield forward – could be fast-tracked using GM technology.

“Researchers have identified many genes natural to the host species that could see a significant improvement in varieties to help push yield, but also make crops more resilient to threats such as disease,” said Mr Norman.

Blackgrass levels in crops were rapidly increasing and the main wheat disease septoria was becoming increasingly tough to control, largely due to resistance to key herbicides and triazole fungicides.

The tightening of pesticide laws across Europe was resulting in product losses and chemical companies were finding it increasingly difficult to bring new solutions for these serious problems to the market, he added.

“Nature and legislation is pulling us in the wrong direction and getting the genetics into seed to help us with these issues has to be the correct way to go,” said Mr Norman.

He highlighted technology such as glyphosate resistant wheat as one potential tool to fight blackgrass and the insertion of identified septoria resistance genes into modern varieties as crucial.

“We need better resistance as quickly as possible and we have the markers to do so.

“There has been a wide scale GM feeding study in the United States over the last 20 years and there have been no evidence of safety issues, so why aren’t we using it?” he said.