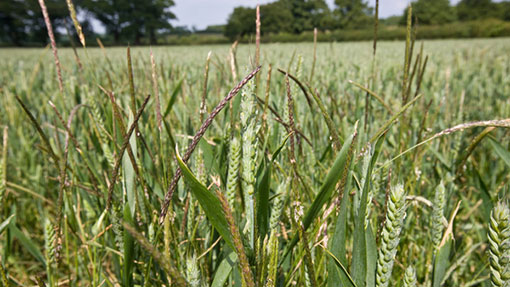 Arable growers facing sky-high costs this season to control disease and blackgrass may see little restpite with a likely carryover of these problems into the autumn.

Fungicide costs have spiralled well above £100/ha in many cases to keep on top of yellow rust and septoria in wheat, while blackgrass-infested crops are a common sight.

Virulent strains of yellow rust and wet weather-induced septoria, as well as light leaf spot in oilseed rape, have been difficult to control and are forcing some growers into a rethink.

Britain’s biggest farming company Velcourt says it is spending more than £100/ha on wheat disease control on its farms in Wiltshire, Dorset and Hampshire and not getting very good results.

“It is tough to control septoria in the South West. We are using the best chemistry but we are really struggling,” Velcourt’s technical director Keith Norman tells the Farmers Weekly.

He reports a decline in the effectiveness of the two main azole fungicides for the control of septoria – prothioconazole and epoxiconazole – exacerbating disease control this season.

In the South West, a full fungicide programme saw only the flag leaf stay free of disease while higher and later maturing wheat crops on the Cotswolds had four good green leaves, Mr Norman reports.

This will prompt a look at delaying drilling, more careful variety choice and perhaps a look towards autumn fungicides on the 54,000ha the group manages from Northumberland to Dorset.

Jonathan Blake, cereal fungicide expert at crop scientist group Adas, warns that yellow rust could be a big risk next season as it can carry over on a “green bridge” of volunteer wheat to the next crop.

He suggests growers can avoid autumn infection by removing any green bridge, using seed treatments and avoiding more susceptible varieties such as Kielder, Santiago, and Solstice.

“The threat of yellow rust requires a green bridge, so growers should look to kill off this infection point,” Mr Blake says.

However, for this season, growers spending heavily on fungicides should see a four- to fivefold return this season due to higher yields despite the declining performance of azoles.

UK record wheat grower Tim Lamyman reports that his disease pressure is very high and he is considering using a fifth fungicide spray this season to keep yellow rust at bay.

“This is the highest disease pressure I have seen for yellow rust and we may have to use a T4 spray this season,” he adds.

Mr Lamyman, who grew a UK record-yielding wheat crop of 14.31t/ha last year, has spent a “normal” £120-130/ha on fungicides but that figure could go higher with a T4 spray of the azole tebuconazole.

Farming in the Lincolnshire Wolds he has seen 200mm of rain in the past 10 days, which has encouraged septoria in some of his wheats.

Crop consultant Peter Brumpton says wheat growers have increased their spend this season, especially at the T1 stage with more using SDHI products at this timing.

He advises growers to stick to a four-spray fungicide regime but pay more attention to getting timings spot on and use robust rates of products.

In contrast, host farmer at the Cereal event, Robert Law, reports no big disease problem on the 1,500ha of light land over chalk he farms at Chrishall Grange, Cambridgeshire.

His wheat fungicide costs are running at about £70-80/ha and although there was a threat of septoria moving into his crop with recent rain, it never materialised.

Other crops have also seen diseases that are proving difficult to manage, with Velcourt’s Mr Norman warning of the huge cost of controlling light leaf spot in oilseed rape.

Four fungicides have not controlled the wet-weather disease on its land in Kent, and this high disease level may carry over into next season’s oilseed rape crop.

“We used two early fungicides and two at flowering but light leaf spot was not controlled,” he says.

In addition, spiralling blackgrass costs this season are likely to be high again next season prompting calls for growers to look at cultural as well as chemical methods of controlling the pernicious weed.

“If this is a bad blackgrass year it is likely to be bad next year. Chemical control is simply not working very well anymore,” said Paul Neve, senior research scientist at Rothamsted Research.

As blackgrass is mainly an autumn-germinating weed that is only viable in the top 5cm of soil, rotational ploughing can bury it and then the seed will see an annual 70% decline, while spring cropping is also a very effective control measure.

“To get on top of blackgrass, farmers really need two spring crops,” he says.

Consultant Mr Brumpton says with many growers spending more than £100/ha on blackgrass control there is a need for a fresh approach.

“There are no answers from a can anymore. We need to change as some land may become un-farmable,” he says.

He expects the winter wheat area to be down this autumn from the current season’s 1.95m hectares due to blackgrass problems and the new three-crop rule requiring most arable farms to grow more than two crops.

He describes the blackgrass problem as an ongoing war which is not going to go away overnight, and needs measures such as spring cropping, fallowing, rotational ploughing, and delayed drilling where possible.

Herbicide experts at Bayer CropScience report growers are spending as much as £175/ha on blackgrass treatments and still not getting good control, which should alert them to change their ways.

“If you are spending over £150/ha and not getting good blackgrass control, then you need to change your system,” said Phillippa Overson, the group’s campaign manager for herbicides.

There is a need to bring in cultural controls as well as chemicals, and her group points to delayed drilling and spring cropping as key methods of control.

“Delaying drilling by two to three weeks has a big impact while a run of two spring crops has a dramatic effect,” said Gordon Anderson-Taylor, the company’s herbicide development manager.

Velcourt’s Mr Norman emphasises that blackgrass needs to be controlled by cultural methods and those with big problems should pull out of wheat for a year.

He advocates a change to spring cropping, the use of stale seed-beds and glyphosate to control the weed.

“Don’t look disaster in the face; blackgrass will be solved by means other than chemicals,” he says.