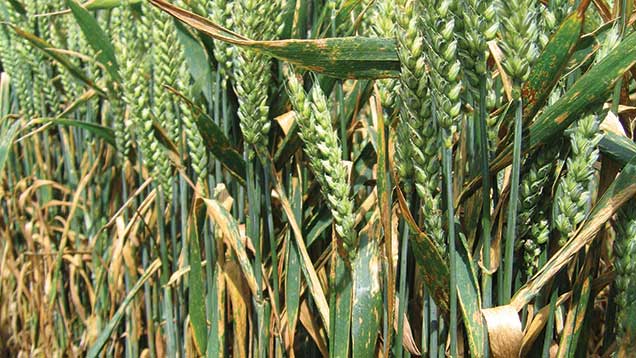 Spore traps that remotely detect disease before crops show any symptoms and alert farmers by text are being developed in a three-year project.

Foliar disease in wheat is estimated to cost the UK industry £320m and just reducing this by 10% through more timely disease control could save £32 a year.

Speaking at the Cereals event, Fera disease specialist Moray Taylor explained that conventional spore traps were being used at several Crop Monitor sites for the first time this season and they were using the data to better understand the relationship between spore loads, weather and crop infection.

It works by sucking in air and taking a sample in a glass tube, which is then analysed for DNA giving the number of spores/cu m or air. Samples are tested in the lab for septoria, yellow and brown rust spores, but he said the hope was to have a prototype next year where all the testing is done within the smart spore trap in the field.

The traps would calculate the risk and alert farmers when disease is moving into the crop and if given favourable conditions, would lead to infection. “This will enable farmers to go with an earlier treatment to get more effective control of disease.”

The project is funded by Innovate and is a collaboration between Fera, Optigene, University of Hertfordshire, Bayer CropScience and Frontier Agriculture. They hope to have a prototype at Cereals next year.