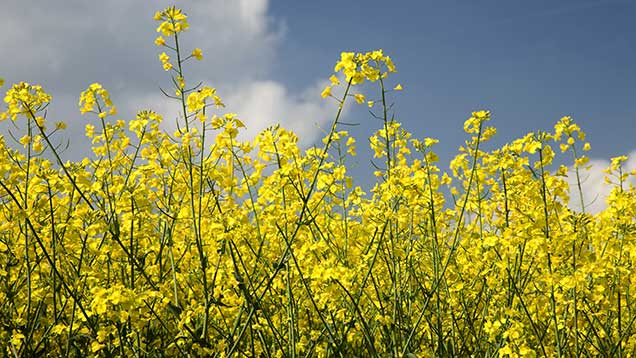 Oilseed rape crops have been struck by up to 92% turnip yellows virus (TuYV) infection in parts of England this year, a new survey has confirmed.

The virus is spread by infected aphids and can cost growers up to 30% of their yield in bad cases.

The findings were described as “worrying” by John Walsh of Warwick University, who led the research on behalf of seed breader Limagrain.

He said: “Levels of infection are much higher than they have been for the past few seasons, with crops in parts of Yorkshire as much as 92% infected. Generally these hotspots are where you would expect them to be, due to the large areas of oilseed rape being grown locally.”

He added that the survey showed some more surprising TuYV hotspots, such as a 74% infection in Somerset.

Presenting the results at Cereals 2015, Dr Walsh said the level of aphid activity in a season broadly correlates with the level of virus infection in oilseed rape crops.

In years with high levels of infection, Dr Walsh found that even neonic-treated crops were infected.

This is because seed treatments only protect plants for up to 10 weeks after sowing and not against reinfection later in winter and in the following spring.

He said: “The chemistry isn’t working and as it becomes less effective, varietal resistance will become more important.”

Growers can use a pyrethroid spray to guard against aphid attack, but Dr Gegas explained that aphids are building a resistance to the current products available, adding that the spray can only be applied once and may not offer total protection for the duration of the aphid season.

Symptoms of an infected crop can easily be missed or confused with other nutritional deficiencies.

Early signs of TuYV are purpling of the leaves and later symptoms of interveinal yellowing and reddening of leaf margins are not usually shown before stem extension.