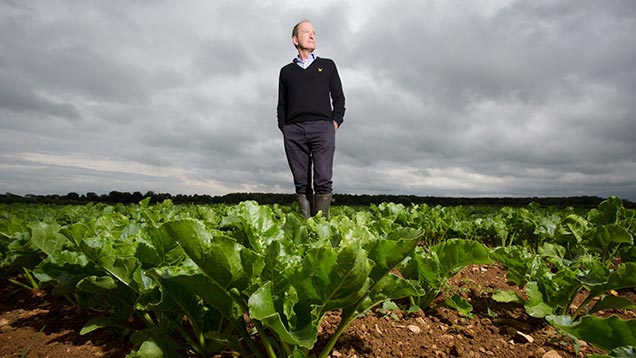 Untreated trial plots of more disease-resistant variety Revelation and the dirtier Santiago at a September and October drilling slot were on show on their stand at Cereals 2015.

It has been a relatively low disease pressure year and the Boothby Graffoe site is not know for its rampant disease, so distinct differences weren’t clear.

However, the company’s technical manager Keith Norman (right) says Velcourt is already opting for wheats such as Cougar, Evolution and Revelation across its 53,000ha of arable land across the England.

It is hoped these varieties can be matched to regional disease pressure – for example, in the wetter West where septoria is much more prevalent.

“Cougar, Evolution and Revelation are all naturally more robust against disease and I think they are actually better than they appear. Drilling later will also reduce septoria risk,” Mr Norman told Farmers Weekly.

Key fungicides – such as the azole group – are declining in efficacy against septoria due to resistance and the new-generation SDHIs are considered high risk.

The trial plots at the Cereals event were set up in conjunction with agrochemical company Bayer CropScience. Its fungicide campaign manager Nick Duncan said by using these cultural measures, growers can not only help themselves control disease and maintain yields, but also take pressure off the chemistry.

“The answer is not to get into a firefight with disease. Drilling resistant varieties later in high-pressure situations and using the right fungicide products at the right dose and timing all help.

“The later drilling will also assist those fighting against blackgrass,” added Mr Duncan.

In addition to variety and drilling date, Velcourt are also investigating how the use of drones kitted out with both infrared and thermal cameras aid disease management.

Infrared cameras will help to identify and quantify disease on wheat leaves and the thermal cameras will detect slight rises in plant temperature to detect asymptomatic disease.

Mr Norman explained this would then be combined with handheld imagery on the ground from Velcourt agronomists and farm managers.

“It will be a bolt-on to our agronomy service and will help our managers to determine much more accurate fungicide timings. We need to move away from calendar date or four-week intervals,” he said.

He added that using the technology should also allow better product selection, tailored to the disease type and severity in the crop.

For more news, photos, video and information at the Cereals event see our Cereals 2015 page.