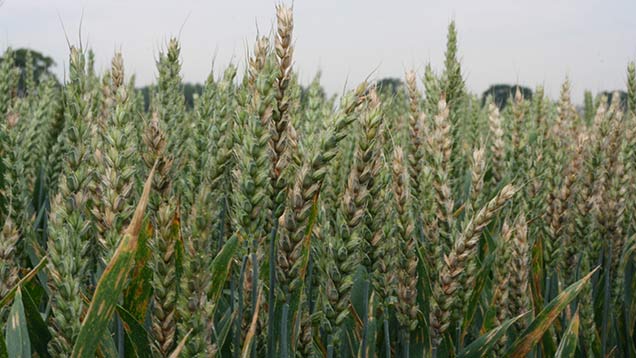 Wheat growers are being urged to protect their crops from the threat of fusarium ear blight disease with an expected change to warm and wet weather.

Many in the south of England have already applied T3 head sprays to counter the disease, but those further north may need to take action as the weather is set the change this weekend.

The ear disease can cut yields by up to 3t/ha in bad fusarium years, such as 2012, while the average loss without fungicides is estimated at about 0.3t/ha.

Adas is holding its national open day at Rosemaund in Herefordshire next week on Wednesday June 17 at 12-4pm.

Advice will be available on subjects such as variety choice and fungicide strategies.

Jonathan Blake, fungicide expert at crop scientist group Adas, says winter wheat crops which are about to start flowering are at risk from the likely change in the weather.

“It’s cool and dry at the moment, but there is the threat of warm and wet weather this weekend, so growers need to make sure they protect their crops,” he tells Farmers Weekly.

Disease inoculum is likely to be present already in wheat crops, so the amount of disease which can develop depends very much on the weather, he adds.

Some winter wheat varieties, such as Gallant and Grafton, are more prone to the disease, while very short strawed varieties are also at greater risk.

“A lot of crops in central England and further north are yet to flower so the threat is very real,” he adds.

His advice is to spray at-risk winter wheat crops at early- to mid-flowering (GS63-GS65) with one of three azole fungicides.

In order of efficacy against fusarium, he suggests using prothioconazole as the most effective, then metconazole and finally tebuconazole.

He advises growers look for the first signs of wheat crops flowering and then spray one to two days later for at-risk crops.

There is little effective disease control from spraying after flowering has finished.