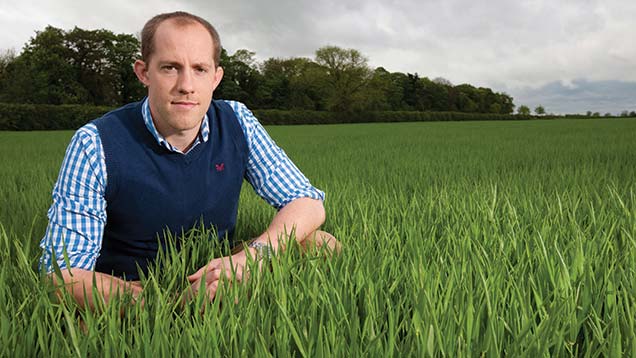 EU rules, nematodes and market pressures have driven cropping adjustments for the Cereals 2015 host farmer, resulting in a shift to more spring cropping.

As managing director of the private farming company Patrick Dean Ltd, Alastair Priestley is responsible for 1,220ha of arable land situated on the medium limestone soils to the south of Lincoln plus the 65ha Cereals site at Boothby Graffoe.

Changes to the cropping have been modest over the past couple of years with potatoes dominating the rotation and remaining the key driver for profitability turning over between £1.2 and £1.3m a year. With over 10 varieties grown on the farm, capacity is limited in terms of land availability, machinery and irrigation.

But potato cyst nematode pressure is the farm’s biggest overall challenge and prevents the maximum sustainable area of owned land being utilised for potato production, which means renting land to achieve the desired one-in-eight-year rotation for the crop, explains Mr Priestley.

“Yields are highly variable due to the drought-prone soils ranging from 6.2 to 11.0t/ha. And while irrigating would be cost effective, the farm doesn’t have enough water.”

Last year the farm acquired a licence for 50m gallons of abstraction from the River Witham in conjunction with a neighbouring farm but have yet to build a reservoir.

“We will be submitting a grant application under the new countryside productivity scheme in the next couple of months to help fund the reservoir.”

Irrigation is, therefore, reserved almost entirely for potatoes, although the farm’s poppy crop can also require irrigation to help germination as was the case this year for around a third of the area. Mr Priestley has grown poppies for morphine production for the past seven years with much success and the area doubled to 250ha in 2013.

The farm now grows 10% of the UK’s morphine poppy crop on contract for Johnson Matthey. And despite a 10% reduction in the contracted area across the UK this year the crop has become a very important component in the rotation.

Scope for increasing the poppy area is dependent on the UK grower base delivering consistent yields and pharmaceutical companies having the confidence in growers to deliver certain tonnages before the UK can compete with the production of Spain and Tasmania.

Successful establishment is the main challenge for Mr Priestley and there may also be issues ahead as next year poppies will be grown on land previously used for the crop, which can pose problems for downy mildew infection, a disease for which there is currently no control option.

Two crops have seen a decrease in area this season, notably sugar beet and oilseed rape. The beet area has decreased by 25% due to quota cuts and the reduction in the “C” beet price. Pressure is now on to produce 85t/ha to reach quota, says Mr Priestley.

The oilseed rape area has been slashed by over 40% this season and could be reduced even further if the gross margin remains low. Despite having been grown on virgin rape land until now and yields consistently reaching 5t/ha it has created other difficulties, explains Mr Priestley.

“We seem to be having more problems with slugs across the farm, especially in potatoes where we have had oilseed rape in the rotation.”

Greening requirements have also contributed to the reduction in oilseed rape with combining peas included for the first time. The attractive contract to grow 75ha of Kabuki peas for seed will also provide a good entry into wheat as well as spread the workload, he says.

A modest increase in spring barley has also boosted the spring cropping area and fits in behind January and February lifted beet where the land is not suitable for poppies, and similarly Belepi wheat fits behind the November/December lifted beet for the same reason.

Planning for 2015-16 cropping is already under way on the farm, and Mr Priestley doesn’t expect any major changes to the current plan. Potatoes will remain the dominant crop driving overall profitability, while the winter wheat area will remain static.

The ability to be flexible is important should late decisions be made to the sugar beet and poppy contracted areas, which only leaves the spring barley and peas to move around once the oilseed rape area is fixed in August, he adds.

Varieties at a glance