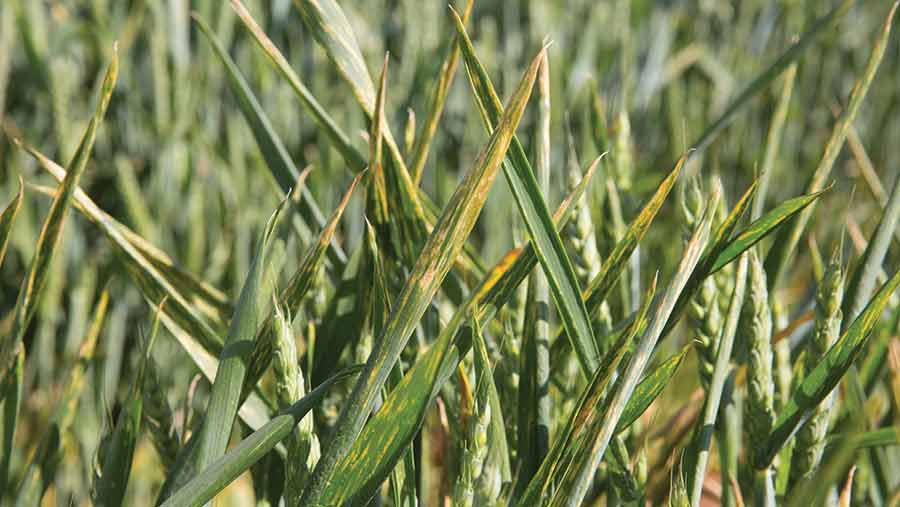 Cereal growers have been warned to “expect the unexpected” with yellow rust infections, following unusual observations in the field last year and new evidence of greater pathogen diversity.

Work done by the UK Cereal Pathogen Virulence Survey (UKCPVS) in monitoring changes in pathogen virulence has found a new yellow rust pathotype not observed in the UK before, as well as the Kranich race, which was identified from isolates collected in 2014.

The Kranich race, named after a winter wheat variety, was first found in Denmark and Sweden in 2011.

There’s no doubt that yellow rust populations are changing, says Mogens Hovmoller of the Global Rust Reference Centre at Aarhus University in Denmark.

More frequent observations of the disease in newly autumn-sown wheat and triticale, earlier and more severe epidemics in the spring and an increase in sightings of the telial spore stage, when yellow rust turns black, are all signs that changes have occurred, he stresses.

“Mild winters are helping pathogen survival,” he adds. “This year, for the first time in Denmark, we found active yellow rust in February.”

There have been considerable changes in race distribution across Europe in the past 15 years, with the new races being more variable and more aggressive, he says. “They spread further, for longer, and more rapidly too.”

Of particular note is the Hereford race, found in Sweden in two locations in 2015, as it is a genotype that has never been seen before, reports Prof Hovmoller.

“Time will tell if it is significant. But its discovery reinforces the need for European collaboration.”

However, no further Kranich isolates were collected in 2015 in the UK, making it highly unlikely to be behind the strange observations from last year.

As a result, adult plant tests are under way to give further information on whether the new pathotype was responsible for high disease levels on some varieties with good resistance ratings in 2015, with an update expected later this summer.

Sarah Holdgate of UKCPVS warns that the very diverse UK yellow rust pathogen population will continue to change and that the situation has become complex.

“The story will evolve,” she says. “We are likely to see yet more diversity, which won’t necessarily fit into our existing structure or the groups we currently know about.”

The yellow rust samples collected by UKCPVS in 2015 continued to be dominated by Warrior-type isolates, she confirms.

“These are put into groups based on their genetic sequence and ability to cause disease,” she says. “The groups have traditionally been named after the variety they were first discovered on, although we are now seeing sub-groups appearing.”

A revised classification system with three main pathotype groups – Warrior 1, Warrior 3 and Warrior 4 – has been developed, with the old Solstice race now being reclassified as Warrior 3.

“A group of isolates sampled in 2015 appeared to be very similar to the Solstice race, but behaved very differently,” she explains. “So these fit better within the new Warrior 3 group, rather than the old UK Solstice race group.”

The Glasgow race of brown rust which re-emerged last year continues to dominate the brown rust population and was responsible for the higher disease levels found on Crusoe – as reflected in the variety’s latest RL ratings.

However, there has also been emergence of a pathotype with virulence to all of the tested resistance genes – the effect of which is unknown. It will be included in adult plant tests this year.

Testing of isolates from sites in Scotland, Essex, North Yorkshire and Lincolnshire – where unexpectedly high levels of yellow rust were seen – provided further evidence that the new pathotype isn’t the original Solstice race, despite some similarities in its appearance, she notes.

“This discovery underlines the important of vigilance,” stresses Dr Holdgate. “We are interested in receiving samples from the field for both yellow and brown rust, as well as mildew, so we can monitor the situation.”

Although not detected in samples collected in 2015, the Kranich race has the potential to affect many wheat varieties, with seven types showing more disease than expected in its presence, she confirms.

“Again, adult plant test results will tell us more,” she says. “It is difficult to predict changes at this stake – it’s work in progress.”