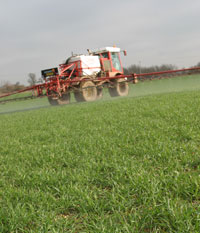 Trials investigating weed control from Atlantis (mesosulfuron-methyl + iodosulfuron-methyl-sodium) plus chlorothalonil mixes over the past four seasons have shown the mix reduces blackgrass control by 6-10%, the firm’s Mark Hemmant says.

“Ideally Atlantis plus [adjuvant] Biopower is best applied alone, or with a residual herbicide partner if required.

“Inevitably, however, a great deal is applied at the T0 timing as there is a grower desire to tank-mix with a fungicide and save a pass with the sprayer.

“With septoria being a problem every season chlorothalonil is ideally suited as a wheat T0 fungicide. But with blackgrass, weed control must take priority.”

In an Agrovista trial carried out by Velcourt tank-mixing chlorothalonil with Atlantis, or Atlantis plus Centaur (cyproconazole) or Ceando (epoxiconazole + metrafenone) left on average an additional 45 blackgrass heads/sq m, he says.

“We are actively discouraging growers from applying the tank mixture and to only apply tank-mix partners that have proven to be both physically and biologically compatible with Atlantis.”