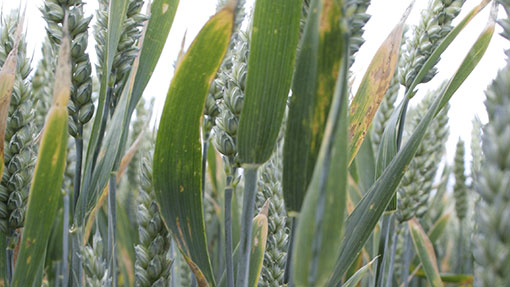 Climate change is increasing the threat of emerging wheat rusts that could have devastating effects on wheat production in the UK, scientists have warned.

In recent years, aggressive new strains of wheat rusts, such as yellow (stripe) rust and leaf stem rust, caused by particular rust fungus, have wiped out up to 40% of harvests in countries in Africa, the Middle East and central Asia.

And the threat of different rusts hitting UK wheat crops is being intensified by climate change, according to scientists. who are using wild grasses and barley to combat the problem.

See also Aggressive yellow rusts may have come from Asia

Work being carried out at The Sainsbury Laboratory and The John Innes Centre in Norfolk has looked at tackling the global food security issue by using genes from resistant plants to breed new varieties.

This year the UK has already seen exceptionally high levels of yellow rust following a mild winter, with NIAB TAG’s Bill Clark suggesting growers were facing one of the worst seasons ever.

Brown rust has also seen a resurgence in recent years, with agronomists and growers having to adapt their fungicide programmes to counter the threat.

James Brown, chairman of the UK Cereal Pathogen Virulence Survey, said the problem was being driven by a changing climate, with new strains being spread rapidly.

“Yellow rust remains the number-one threat to the UK. It is a much more difficult problem to control because of its greater genetic diversity. It is a far more variable pathogen,” Dr Brown added.

“In the long term, stem rust could be a bigger risk than it is at present because of climate change.”

He also suggested that types of rust which were previously forgotten could also re-emerge and threaten UK shores in the future.

Epidemics of the fungal disease previously ravaged crops in North America in the 1950s, prompting million of pounds of investment into developing rust-resistant varieties.

However, an increasing number of outbreaks in Africa and Europe have prompted fears of it becoming a serious threat once again.

Dr Brown said a clear strategy for breeding durable resistance to all three rusts – stem, leaf and stripe – would be vital but more support may be needed to combat a growing worldwide problem.