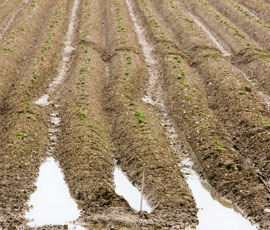 “I would advise growers to look into their rhizoctonia control if they can, especially if they are in high-risk conditions,” says John Sarrup from SPUD agronomy.

High-risk conditions include potatoes grown in tight rotation, growing varieties that are more susceptible to attack – specifically those that produce low tuber numbers – and soil conditions.

For many growers, it will be cold, wet soil conditions that will be causing the most concern, he says

“Any conditions which stress emerging potatoes at this early stage in their growth will make them particularly susceptible,” says Roger Blyth, field technical manager for Syngenta.

Rhizoctonia is a fungus which is either soil-borne, endemic in most soil types, or seed-borne, often showing up as black or silver scurf.

It has several yield-damaging effects, the main one of which, advises Mr Blyth, is the effect it has on tuber size and shape, leading to an uneven crop. An uneven crop is particularly bad news for growers who supply supermarkets or processors who have to meet a certain size specification.

Trials of Charlotte planted in February, grown under fleece in Suffolk and East Yorkshire, are already showing signs of significant infection. Growers of later-planted, untreated crops might already be able to see distinctive brown lesions on sprouts emerging from seed.

Unfortunately, for those finding rhizoctonia on crops there is no post-planting treatment. Growers can, however, combat the fungus pre-planting with a fungicide such as Amistar (azoxystrobin).

Growers should consider the use of a seed treatment such as Monserin (imazalil and pencycuron), which is especially important if there are any signs of silver or black scurf in seed crops.

“Planting into good conditions is also essential, though that might be more of a challenge for growers in this year’s appalling conditions,” says Mr Fisher.

Looking beyond the rhizoctonia pressure, Mr Fisher advises growers to be on the look out for early blight, which could affect plants drilled in the dry spell in March that are now emerging after a long latent period in cold, wet soils.

Planting has been slow across the country and conditions have really set back growers in Hereford and the Borders.

Ian Oliver, agronomist for Powell and Oliver, has seen less than 50% of this year’s crop planted so far. “Those that did manage to plant then had problems with some fields flooding,” he says.

In the fields that weren’t water-logged he is only just starting to see plants emerging, which have taken six to seven weeks to come through.

It’s been a similar story for Mr Fisher in North Yorkshire, where the small area that was planted in March is only just beginning to emerge.

Cool soil conditions and late emergence has actually been a good thing for his growers, as it would have been almost impossible to apply first blight sprays.

“If crops had emerged there would have been no way of getting a sprayer across the ﬁelds,” he says.