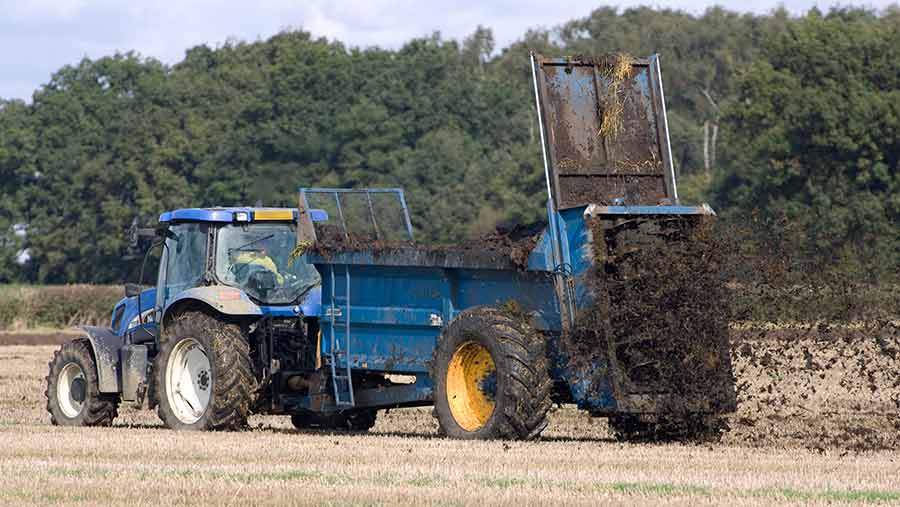 The addition of organic materials can improve soil fertility and also provide a useful source of nutrients. Louise Impey reports on the latest research.

The use of bulky organic materials, such as green compost, can increase soil organic matter, fertility and crop yields in just three years.

These solid composts produce the same rise in organic matters as alternatives, such as farmyard manure, but composts achieve the change in half the time.

John Williams at Adas Boxworth reveals that research funded by the charity Water and Resources Action Programme (Wrap) had showed marked changes in soil quality – but only after repeated application over several seasons.

“We’ve seen an early indication of potential long-term changes, but this approach is not a one-year fix. Green compost gave the best results, but a green/food compost and farmyard manure were also good,” he says.

In contrast, liquid digestate and slurries, both of which have a high water content, had very little effect on soil properties, but were good sources of nutrients.

“That wasn’t a surprise, as they are only around 5% dry matter. But when it comes to their nutrient supply, it’s a different story,” Dr Williams adds.

The study concluded that while digestate, from anaerobic digesters, provides more available nitrogen than composts and could help growers save on bagged fertiliser, the solid material had a bigger impact on soil organic matter.

“There’s more compost and digestate available for use on arable soils and so this work aimed to investigate how they should be used to best effect,” he says.

The trials, which started in 2010, took place across seven UK sites and were established to investigate the impact of repeated applications of these materials on soil quality, nutrient supply and emissions to air and water.

At the end of three years, the soils were analysed for everything – nutrient content, biology and physical properties.

While four of the sites were a “blank canvas”, the others had already had either green compost or farmyard manure applied for over 16 years.

“What we discovered was that in the short-term, these bulky organic materials increased soil nutrient status and light fraction organic matter. So it was all going in the right direction,” Dr Williams adds.

He says that marked changes in soil quality, especially soil physical properties, were only apparent after repeated additions of them over several years – or more than three years.

The work also showed that applying compost for nine years was as effective as 20 years of farmyard manure in building up soil organic matter levels.

“Retention of the organic matter supplied by the green compost was almost twice that of farmyard manure, probably due to its higher lignin content. In other words, it was more resistant to decomposition,” he says.

Other findings were that all of the organic materials in the study increased soil nitrogen, phosphate and potash supply. In addition, crop yields were higher with all of the treatments when compared with a fertiliser-only control.

Furthermore, there was no effect from repeated compost or digestate applications on soil total metal and organic compound contaminant concentrations or crop metal concentrations.

“This is an important finding. It shows that using compost and digestate in an arable rotation is a sustainable way of improving soil organic matter,” he said.

Dr Williams was speaking at the Association of Independent Crop Consultants conference in January.

The full results of the Wrap study were revealed early this month in its report “Field experiments for quality digestate and compost in agriculture (DC-Agri)” in which it hoped to encourage more uses for these products in crop production.

Wrap director Richard Swannell hailed the finding as a “significant step” towards increased use of digestate and compost products in agriculture.

“These new findings show the benefits using digestate and comport correctly can bring, and for the first time growers have the evidence to make informed decisions about their fertiliser use,” he says.