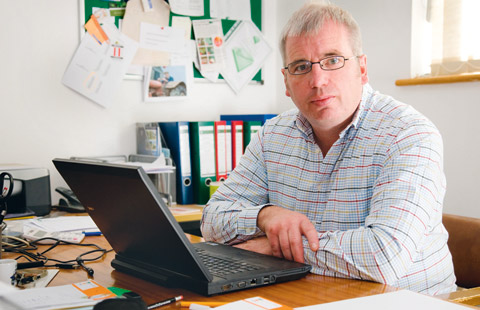 While I remain concerned about the dry state of our soils due to the drought in past seasons, the fine spring weather has been a bonus.

The conditions for putting our few spring beans into over-wintered stubbles are quite good, better than I dared expect on some of the heavier land. This is part of our new direction with over-wintered land within the new ELS/HLS agreement, and will hopefully work well with a spring bean break to help with blackgrass control, and keep our oilseed rape crops on a sustainable one-in-four rotation.

It is tempting to start on sugar beet drilling early, but having been caught with late frosts damaging the emerging seedlings on our low lying land in seasons past, I will be patient – probably until mid-March.

Much of the wheat has been rolled to re-consolidate after the late winter frosts and help with wheat bulb fly control. Most of the wheat has evened up nicely after the protracted period of germination last autumn, but as shown in the soil pits dug in some fields for a recent soil course held here – the lack of moisture could be a limiting factor in yield again this year.

Unfortunately, there is still no sign yet of our single farm payment. As I mentioned before, in recent years we have received it in early December, and little has changed with the claim. Our RPA caseworker has been as helpful as possible, and I believe we are now stuck in another part of the system beyond his desk.

I am pleased that in general things have improved and most claims are probably now paid. I should also add that we are currently still solvent. However, with cashflow from rent payments and substantial input expenses approaching as the early spring continues, our “brown envelope” would be very welcome.