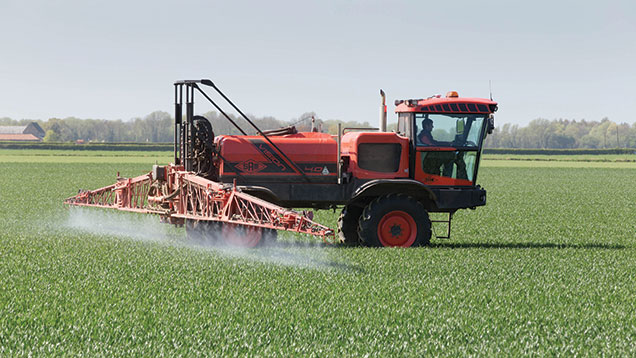 Wheat growers are being urged to consider an alternative early fungicide product to save money, get some control of take-all and help in the fight against fungicide resistance.

Many growers use an azole plus a multisite product for their first T0 fungicide in late March, but could switch to a strobilurin where rust diseases are not well established.

Using a fungicide with a different mode of action, such as a strobilurin, would allow growers to leave azoles for later in the season and help protect their efficacy against septoria.

This comes at a time of reduced efficacy of the azoles and after isolates of septoria have shown signs of resistance to the newer SDHI fungicides.

Iain Hamilton, field technical manager with agrochemicals group Syngenta, says the strobilurins can be useful in a fungicide programme despite their limited activity against septoria.

“They have the advantage of acting against take-all, may be slightly cheaper than azoles and could be a tool to help with fungicide resistance,” he tells Farmers Weekly.

The early T0 fungicide typically costs £12-15/ha and gives a yield boost of 0.36t/ha, according to trials by crop consultants Adas at Rosemaund in Herefordshire.

If yellow or even early brown rust is seen widely in crops, Mr Hamilton advises following an azole multisite approach, but if only the first signs of rust are seen in crops then a strobilurin plus a multisite might be a useful alternative.

Looking at Syngenta’s stable of products, Mr Hamilton says he would chose Cherokee as an example of an azole plus multisite if septoria risk is high and rusts are well established.

But if rusts were only just detectable and the septoria risk is low, he would opt for a strobilurin plus multisite such as Amistar Opti.

On a Syngenta trial site at Chilbolton Down Farm, near Stockbridge on the Hampshire Downs, septoria could be seen across the plots, while yellow rust was scattered throughout the field with the odd bit of brown rust.

Therefore, he is advising growers to prepare for T0 fungicides, often applied in late March, to control the yellow rust and protect against septoria.

“The T0 pays for itself and is also an insurance against the later T1 spray being delayed,” he says.

He says the azoles have a slightly better curative effect than the strobilurins on rusts, but the strobilurins offer an alternative for moderate disease-level situations, and could help to limit disease resistance to fungicides.

“It would seem sensible to use a non-azole at a competitive price to an azole in a moderate disease-pressure situation,” he says.

Mr Baldock adds it is important to use chlorothalonil as no known resistance has been seen with this multisite protectant fungicide.

Fungicide expert Jonathan Blake at crop consultant Adas agrees strobilurins are not as good as azoles such as tebuconazole, cyproconazole and epoxiconazole in their activity against rusts, but can be used in moderate risk rust situations.

“Strobilurins would be a good alternative, as long as there is not active rust in the crop,” he says.