A 70% reduction in the time taken to establish his crops this autumn, and the cost approximately halved, is a good start in convincing Andrew Manfield of the benefits of controlled-traffic farming.

A visit in February from Tim Chamen, who provides CTF consultancy for CTF Europe, to his 190ha farm just outside York was the catalyst for Mr Manfield deciding to convert to the system this autumn. “We were using a conventional plough-based system, where the plough was followed by either a power harrow or a tined harrow, and then a 3m combination drill,” he says.

“When Tim came in February I didn’t think he would find too many problems when I sent him out to a field of spring barley. But he came back with evidence of poor soil structure below the surface, and I guess that just confirmed in my mind that controlled traffic was the right approach.”

Mr Manfield had identified several challenges for the future profitability of his farm. The first was that reducing cost would never be the only answer. “You cannot reduce your cost per tonne of production purely by taking out cost,” he says. “Sooner or later you can’t take any more cost out, and if your cost of production is still above the market price, where do you go?

“So you also need to improve yields, and essentially that is a factor of improving soil quality.”

And that’s where controlled-traffic farming comes in. By keeping to the same traffic lanes for all equipment year-on-year, a significant proportion of each field will be free from the compaction caused by being trafficked, says Mr Chamen.

“Trafficking damages the soil. It squashes out the air, squeezing it together, sealing up the surface and making it cloddy. Caterpillar tracks can reduce the problem, but they don’t eliminate it.” 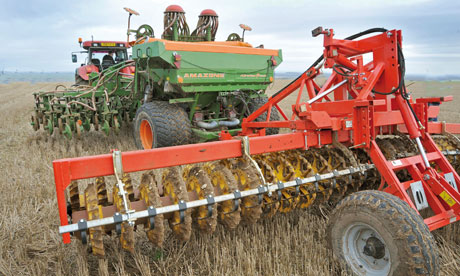 Some 80% of the damage comes with the first pass, he says. “In the top 20cm, the damage lasts for three years, and it can take up to 10 years for the soil to recover naturally. In most randomly-trafficked fields, it is difficult to find areas that are not trafficked once every three years.”

Satellite guidance systems (see panel) are the essential component in making controlled traffic workable. After that, it is a matter of organisation, says Mr Chamen. “CTF doesn’t compromise production, you can use big machinery, and it can be achieved using your existing equipment.”

That was a key consideration for Mr Manfield. He had no big pot of money to fund the switch, and with a relatively new combine and a tractor that was less than one year old, he wanted to use them within the system. It also meant any new equipment would need to be bought readily, preferably second-hand. “I had one over-riding rule – no weird equipment.”

Other considerations were that he wanted some cultivation flexibility, despite the farm’s aim to direct-drill as many crops as possible, and to be able to bale straw for his straw business. His solution was to implement a system based on 6m-wide equipment widths, which allowed him to use the existing combine and tractor with some relatively simple adaptations.

The rear axle on the Case combine has been widened and the wheels pushed out by about 10in, so the combine runs on a 3.7m track width. The cut width is 5.8m – slightly less than the full 6m width of the combine header.

Tractors run down adjacent combine wheelings – one wheel in the first combine pass, the other wheel in the next combine pass – in the “TwinTrac” system using a track width of 1.9m. A 75cm longer auger has been made from scrap parts to make the system work when unloading grain.

Mr Manfield has spent about £3000 on modifying the combine.

Other issues emerged during harvest. With trash management being paramount to the success of non-inversion tillage systems, and even more so with CTF, where crops are drilled in the same direction as they are combined, Mr Manfield spent some time before harvest formulating a plan to deal with trash.

“We were told that our tine drill, an Amazone Primera with a Güttler roller adaptation, works best with short stubble and short-chopped straw, evenly distributed,” he says.

“So we decided we would leave a longer stubble, because it increases combine output by about 30%, and then top the stubble at our leisure after harvest, which would also help deal with the issue of poorly distributed chopped straw typical from combines.”

It also meant he would be able to apply slug pellets under the mulch rather than on top. 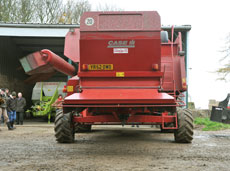 But although the theory was sound, it didn’t go exactly to plan at harvest, he admits. “First, the 6m topper didn’t work quite as well as we thought it would, as it tended to leave long straw in the wheelings laid across the direction of travel. It was nightmare – blocked the drill and left a habitat for slugs.”

Discussions with Bomford, the topper’s manufacturer, have, hopefully, solved the problem in the form of a modification for the mower for next season, says Mr Manfield.

But that might not be needed. With the problems he faced, he tried drilling with the Amazone directly into the longer stubble. Surprisingly, it worked well. “Going with the rows, we found the stubble remained attached and seemed to walk around the tines. It is only if you have a lot of trash or you go across the rows and the stubble pulls up that you have the problems.”

This discovery might mean Mr Manfield will attempt to drill into the longer stubble next year without using the topper, particularly on fields that have been baled.

On those fields, he rakes two swaths into one, which keeps the baler in the CTF wheelings. “Because of our climate, we would have to turn the straw anyway,” he says. “Raking it into one also increases output.”

Again, the theory wasn’t quite as successful as he had hoped. The second-hand Tonutti V-rake bought for the job couldn’t cope with the sheer volume of straw. A back-up plan using a Claas Liner 350 single rotor rake worked better, but wasn’t quite wide enough to do the job and left a thin line of straw, which again caused problems when drilling. “An 8m twin rotor rake is on order, so we can do the job properly next year,” he says.

Teething problems aside, autumn 2008 has been a success. “I estimate we’ve had a 70% reduction in establishment time per hectare and a 50% reduction in costs per hectare,” he says. That calculation included labour and diesel costs, and an extra pass of slug pellets.