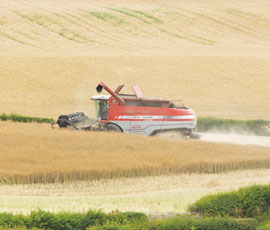 Does the intensification of breeders’ efforts into producing hybrids, which was so evident at this year’s Cereals event, mean that conventional oilseed rape varieties have had their day?

Absolutely not, said Simon Kightley, of NIAB TAB, who pointed out that there is no evidence of any consistent yield advantage from hybrids over the best conventional varieties to date.

“Take a look at the Recommended List,” he said. “Conventional varieties occupy three of the top four places in the east/west region. And only 1% in gross output separates the top two.”

Furthermore, in the latest HGCA planting survey, of the six varieties that command more than a 5% share of the total crop area, just one is a hybrid.

“There’s a great deal of marketing activity, which might be creating a different impression,” he said. “But growers aren’t moving into hybrids at the rate some would have us believe. And there will be good reasons for that.”

His view was supported by the results from United Oilseeds’ 2012 grower survey, which were revealed at Cereals.

Nearly two-thirds of the farmers who took part said they had drilled conventional varieties in their best fields, while only one-third had used hybrid varieties.

“That seems to contradict some industry commentators, who suggest that hybrids have already overtaken conventionals,” said the company’s technical manager Richard Elsdon.

He said hybrids could offer better consistency in certain situations, but did not see them suiting every site or dominating the market in the foreseeable future. “Growers will hang on to conventionals while they are still performing well.”

The fact that three-quarters of the surveyed farmers used one of the top six varieties on the HGCA RL was also relevant, he added. “They’re making their choices on yield potential, which is why conventional varieties are featuring strongly. Their yield performance is very good.”

Jeremy Taylor, of Senova, who markets conventional varieties Fashion and Vision, said there was still plenty of life in the conventionals sector and reported buoyant seed sales and strong farmer demand ahead of autumn 2012.

“Apart from their good yield performance, conventionals offer growers other advantages,” he added. “Lower seed costs, ease of harvesting, less biomass and the ability to use farm-saved seed are just some of these.”

Philip Marr, of Agrii, was of the same opinion. “They haven’t had their day. There’s still demand and a need for conventional types, just as there is for hybrids. And there are some exciting new ones coming up for recommendation later this year.”

But David Waite, of Frontier Agriculture, painted a different picture and pointed out there were only a handful of conventional breeders left.

“There aren’t many non-hybrid breeding programmes,” he said. “Our oilseed rape seeds business is already more than 55% hybrid sales.”

He had seen a drift from North to South over time in hybrid uptake and added that the wide rows establishment method, which was gaining in popularity, lent itself to hybrids. “There’s a need for rapid developing, high biomass plants with this technique, and the hybrids provide just that.”

Lee Bennett, of Openfield, also thought that conventional varieties were on their way out, after a very good spell. “They will still exist but they are going to become a very minor part of the market,” he said.

“Apart from a lack of availability in the future, due to the switch in breeding programmes to hybrid development, there’s also the fact that farmers have now learnt how to grow hybrids. They’ve got to grips with seed rates and canopy management.”

Will Miller, of Dekalb, pointed out that hybrid growers were seeing a greater yield advantage on farm than was suggested by the figures on the RL.

“There’s no doubt that in typical farm conditions, the gap is widening.

“Our latest results show there’s an 11% gross output difference between our best-selling conventional, DK Cabernet, and one of our latest hybrids, DK Extrovert, which is currently in NL2 trials.

“That level of yield jump is going to be very difficult for growers to ignore, especially with the crop commanding such good prices.”

He also pointed out that there were other desirable hybrid traits from the Dekalb programme, which were not available in conventional varieties.

“Our new generation hybrids have the RLM7 gene, which gives excellent phoma resistance. It’s backed up by polygenic resistance, based on a combination of genes, which supports and protects the major gene.”

Pod shatter resistance was another good example, he said. “We’ve identified the gene that stops the natural dispersion of seed, so our hybrid varieties can withstand bad weather conditions at harvest.