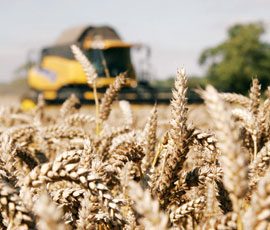 Wheat yields could potentially double as scientists seek to make the crop’s efficiency of photosynthesis similar to that of maize plants.

Maize draws in more carbon dioxide than wheat does, making it twice as efficient at transforming light energy into biomass and hence yield.

Scientists at Rothamsted Research see improving the photosynthesis of wheat as key after setting out a programme to raise top yields by a third.

They are confident this yield lift can be reached without using genetic modification (GM) technology, although GM is being used in the laboratory to map particular traits.

Last year, Britain’s biggest agriculture research institute set a target to reach top wheat yields of 20t/ha within 20 years in what was termed its 20:20 wheat project.

Researchers say the efficiency of photosynthesis in maize at 6% is twice that of wheat’s 3%, suggesting this is a key bottleneck to increasing wheat productivity.

Although wheat yields could be doubled, other factors such as water, nutrients and plant structure could limit the expected jump in yields.

Martin Parry and Malcolm Hawkesford are leading the work, and part of this is to raise the percentage of intercepted radiation that can be used for photosynthesis.

“We should be able to double the radiation efficiency of wheat, although this may take a GM route,” says Prof Parry.

Even without using GM techniques, wheat’s photosynthetic efficiency could be improved by around 25-30%, but Rothamsted is keen not to rule out GM in the future.

This rich carbon dioxide atmosphere in the wheat increased the crop’s biomass by 30% and its yield by 19% as increased photosynthesis raised grain yields.

“Photosynthetic capacity and efficiency are important bottlenecks to raising wheat productivity and increasing these will therefore underpin our approach to increasing yield potential,” says Prof Parry.

The optimisation of a single trait alone is unlikely to deliver the yield increase required in the field so the team is working to bring a number of traits together using conventional breeding or GM.

“We are committed to using all methods available as our aim is to give the knowledge and the tools to the plant breeder,” says Dr Hawkesford.

He says Rothamsted produces around 600 GM plants a year, which never leave the laboratory, and GM would be the key tool for transferring maize genes into wheat.

However, the researchers emphasise that the 20t/ha target could be reached simply by selecting germoplasm to give the traits required without using GM.

“If we optimism all the traits in wheat we believe we can reach a yield of 20t/ha with any major bullets,” says Dr Hawkesford.

The last major yield breakthrough came with dwarf wheat varieties back in the 1960s and 1970s, which helped double British wheat yields to around 7t/ha.

These new dwarf varieties with less straw were able to put more biomass into the grain and the stiffer straw allowed more nitrogen to be applied without fear of lodging.

Yields have crept up only slowly, to around 8t/ha currently, as researchers search for the next major breakthrough to push yields even higher.

Dr Hawkesford says with the wheat world record at 15.7t/ha and the UK record at 14.3t/ha, and yields of 16-17t/ha being witnessed using yield mapping across fields, then 20t/ha could be in sight.

Maximising yield potential is only the first of four targeted areas that Rothamsted has identified within its 20:20 wheat project.

The second area is protecting the yield potential with the focus on three key yield-sapping diseases – take-all, septoria and fusarium head blight.

The researchers are looking at germoplasm with resistance to all three pathogens and assessing the possibility to breed in resistance to varieties.

The third area under focus is soils and so to improve rooting, create a good canopy and better utilise nitrogen fertiliser as the yield responses tend to flatten out above applications of 200kg/ha.

The fourth area is mathematical modelling to determine the best farming system for growing high-yielding crops.

Rothamsted scientists launched their plan last year to increase potential UK wheat yields to 20t/ha within the next 20 years, or by 2032, and termed it the 20:20 wheat project.

The aim is to provide the knowledge and tools to tackle food security challenges for a growing world population.

Wheat provides a fifth of human calories globally, but since 1980 the rate of increases in wheat yields has declined. The average UK farm yield is around 8t/ha and the world average is much lower at around 3t/ha.

It is hoped this programme will bring significant economic benefits to UK farmers as every 1t/ha increase in yield is estimated to be worth £318m per year at the farm gate.

Cereal growers are being urged to enter their crops into ADAS’s Yield Enhancement Network (YEN) competition in an effort to break through this yield barrier.

Those with a good climates and soils can attempt to break the Guinness Book of Records for yield. But anyone can win because there are also awards for achieving the highest percentage of local potential yield.

It is hoped the competition will drive innovation and it already involves industry members such as agrochemical giants BASF, Bayer and Syngenta, advisers Frontier and Hutchinsons and fertiliser group Yara.

There will also be collaboration with consultants NIAB TAG, Irish agriculture and food development authority Teagasc and precision farming group The Courtyard Partnership.

Any grower aspiring to get close to the maximum potential yield of their land can join in by accessing www.yen.adas.co.uk or by contacting the farming industry partners.

Gold, silver and bronze awards will be given for growers with the highest absolute yield and also the highest percentage of potential yields.