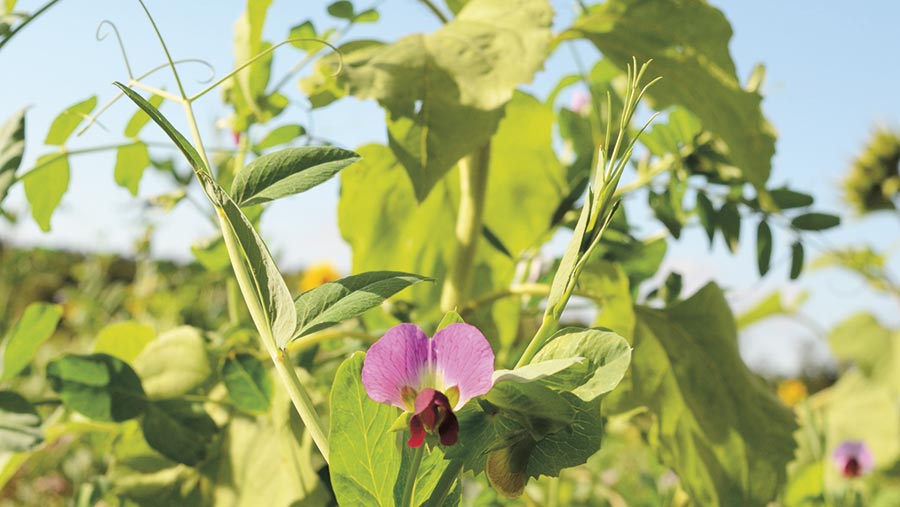 He originally set out to see if cover crops could help with spring crop establishment, mainly by capturing and recycling nitrogen, but also by improving soil structure and preparing the ground for the barley crop.

See also: How companion crops can raise yields and slash inputs by 30%

That’s because achieving good establishment is crucial to successful spring cropping, given their shorter cropping season.

And after four years of trials, he is now seeing benefits in following crops when using the right mix.

“After a few years on this farm, it is starting to look as though the use of a nitrogen-fixing mix helps to raise the yields of the next spring barley crop, in some cases by as much as 30%,” he says.

He says this compares very favourably to the use of straight vetch or phacelia, for example, which doesn’t seem to offer the same nutrient recycling benefit in this situation.

Mr Durrant adds these differences didn’t become apparent until he had got on top of slug numbers.

Slug numbers rose dramatically when cover crops were first introduced and were responsible for poor barley plant stands in the first couple of years, he recalls.

“Even on light land, where oilseed rape hadn’t been grown, slug numbers just exploded. It took a determined effort to get them under control.”

The trials are being conducted on a light land site at Finchingfield, which is growing continuous spring barley due to a lack of viable and consistent break crop options.

Three different Terralife mixes (see ‘Different cover crop mixes were trialled over four years’, below) were grown alongside straight phacelia and straight vetch for four years, in 36m widths, with a fallow strip making up the last treatment.

This year, as livestock are being integrated back into the farming system, stubble turnips have also been introduced, with sheep being used to trial graze all of the plots.

To test the impact of growing cover crops on soil workability, spring barley has been established by three different cultivation methods – direct drill, a light cultivation and ploughing.

Mr Durrant has seen that cultivating or ploughing the land before drilling the spring barley has a positive effect on yields, outperforming direct drilling.

“That’s probably due to the effect both practices [nutrient recycling and cultivations] have on nitrogen mineralisation, which means that the nutrient is readily available to the new crop,” he notes.

Mr Durrant recognises his finding is in contrast to the belief cover crops can perform all the necessary cultivations for the spring crop, making direct drilling possible, even on heavy soils.

“We haven’t seen that here,” he stresses. “There has been more benefit from cultivating than direct drilling.”

The cover crop trials will continue for another five years, as Mr Durrant recognises they are a long-term commitment.

“Just growing them for a year won’t give you a return on your investment. Even then, they aren’t going to reduce your inputs, so be happy with a break-even position.”

He adds that knowing how and where to use cover crops is important.

“Finding the right land is essential and our experience here suggests that they are better suited to lighter ground, as they have been inconsistent on heavy land.”

Cover crops have been promoted as a means of tackling weed infestations, however, Jeremy Durrant urges caution.

“Be careful if you’ve got blackgrass, as you need to be able to use stale seed-beds to help control it,” he says.

“On our light land trial site, we are finding that we are building the weed seed bank rather than depleting it, which means that we are in danger of developing quite a groundsel problem.”