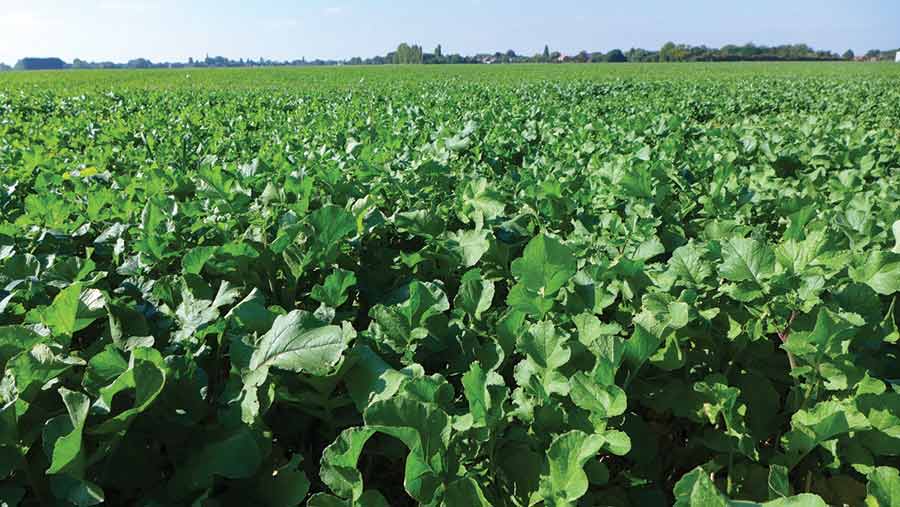 Cover crops can pay for themselves with higher subsequent crop yields and reduced spring cultivation, while giving long-term benefits to soil structure and blackgrass control.

These crops could become part of the rotation on many arable farms and may be one method used to overcome the yield plateau seen in wheat, say agronomists.

“On average, a spring barley crop following a cover crop should see a yield boost of 0.25-0.5t/ha, while there should be a reduction in spring cultivation costs,” he tells Farmers Weekly.

Jim Hynes, agronomist at advisory and distribution group Agrii, says even if the immediate benefits just cover the costs, then the long-term benefits are worthwhile.

“Cover crops are a long-term game, even on a cost-neutral basis we are seeing improved soil structure, organic matter and a reduction in soil erosion,” he adds.

Both advise that growers need to be careful which cover crop mixtures to chose depending on what they are trying to achieve and also to avoid the carry over of diseases and pests.

Cover crops will use nutrients left in the soil after harvest and prevent nitrates being lost into surface water, especially during heavy rainfall in the autumn and winter.

Mr Bull calculates that about 70kg/ha of nitrogen can be used, worth about £50/ha in nitrogen costs, which could lead to savings in nitrogen in future years.

“Nutrients will disappear unless they are looked after. This is nitrogen you have paid for, so why lose it down the drain?” he says.

Mr Hynes points out that cover crops need to be drilled by end-August, which highlights one of the major practical problems, as harvesting cereals and drilling oilseed rape will often take priority in this busy month.

Chosing the right mixture is key and Mr Bull outlines the advantages and drawbacks of three different mixtures  – oil radish, mustard and a black oats/vetch mix.

Oil radish produces good tap roots, which can go down 250mm and improve soil structure, but can be one of the more expensive cover crops in terms of seed costs.

Mustard is very good at sucking up moisture from the soil and so can create good well-drained conditions at spring drilling, but as a brassica it can harbour clubroot disease, which could be a problem if oilseed rape is the rotation.

A black oats/vetch mix can create good topsoil structure while the vetch as a pulse fixes its own nitrogen, but the mix is not as good as oil radish for improving a soil’s deep structure.

Oil radish is particularly effective against blackgrass by shading the grassweed and also has a claimed allelopathic effect, whereby the oil radish exudes bio-chemicals that can control blackgrass.

When oil radish is well established it has been shown that the blackgrass dies below the cover crop. Mr Bull emphasises, “We are killing it without using chemicals.”

Mr Hynes agrees that oil radish gives good control of blackgrass, adding that the best control comes with using a minimum disturbance disc drill in the spring so as not to encourage any blackgrass to germinate.

With a yield boost of up to half a tonne of barley, worth £50/ha, and reduced spring cultivations estimated at £35/ha, this gives a positive benefit of £85/ha.

In addition, Mr Hynes points out that reducing soil erosion in a wet autumn and winter was a further advantage.

Mr Bull and Mr Hynes were speaking to Farmers Weekly after a briefing on cover crops organised by Defra agencies the Campaign for the Farmed Environment and Catchment Sensitive Farming, with input from Kings and Agrii and held on the Ramsbury Estate, about 4 miles east of Marlborough in Wiltshire.