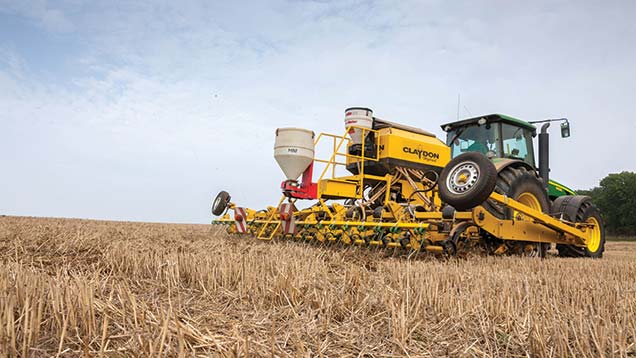 A fear of being unable to establish cereal crops in October is the main reason growers opt for earlier drilling, but cover crops could be the solution.

Producing stale seed-beds in the autumn is a key way of tackling blackgrass, with trials at Agrii’s Stow Longa site showing that drilling in the second week of October instead of the third week of September can  bring numbers down substantially.

Agrii’s head of agronomy Colin Lloyd points to plots that were only direct drilled for three years after ploughing. “We saw 83% control with late drilling versus 35% with early drilling – the only difference being drilling date.”

Stale seed-beds are a vital means of reducing blackgrass numbers prior to drilling in the autumn. See our step-by-step picture story showing tips on making stale seed-beds count this autumn.

“So even with a shallow cultivation system, delayed drilling offers some control,” says Mr Lloyd.

But getting the message across is difficult. “Many farmers say they can’t drill late on heavy land, like that at Stow Longa. Crops are gappy, as the drill type is not ideal for this situation.

“It is a catch-22, as blackgrass numbers are lower [when later drilled], but so too is yield.”

His colleague, trials manager Steve Corbett, believes improving soil structure will enable later drilling on heavy land and this is where cover crops may come in.

“Lots has been said about cover cropping, such as one cover crop is equal to five glyphosates, but what is this based on?” Last year, he started to look at cover crops with blackgrass control firmly in mind.

The first question is what species to grow. He believes this depends on what you are trying to achieve. “Is it nutrient trapping, soil structure improvement, grassweed control, greening options or raising crop yields?”

In the first year, he looked at direct drill versus direct drill and mustard, as brown mustard is said to have biofumigation properties that could help kill seed. But he did not see any effect.

Agrii also looked at a mix of phacelia, oil radish and white mustard, which is widely used in France. However, year one results were disappointing for winter crops. For example, brown mustard saw a yield penalty and higher blackgrass numbers.

As he feared, the cover crop got in the way of controlling blackgrass. To get around this, he applied a second pre-emergence  glyphosate after drilling, as the first glyphosate didn’t get to the blackgrass because of the cover crop.

However, there was some good news. Spring wheat did benefit from the cover crop, with a 1.8t/ha yield improvement and a reduction in blackgrass. “It shows that it needs to be in the ground long enough to see yield benefits.”

But the same response was seen when opting for narrow drill points on the Claydon drill instead of the standard drill points, but without the cost of establishing a cover crop.

“Maybe this points to the benefit of soil structure,” suggests Mr Corbett.

Half of the trials area was drilled with winter wheat on 29 October and the other half with spring wheat on 9 April.

“The site has a severe compaction issue, with a pan caused by many years of shallow cultivations. And if you don’t tackle it and get a wet autumn, you get smearing when direct drilling and consequently poor establishment.

“But we saw a real improvement in soil structure. The oil radish roots had gone down through the pan and were pumping water. Black oats gave even better results with a good crumb structure, while the two vetches had limited effect.

“We were surprised to see a marked improvement with a cover crop that had only been in the ground 10 weeks.” The picture will become clearer this summer when plots are taken to yield.

Next season, he is looking to combine both black oats and oil radish in the same mix.