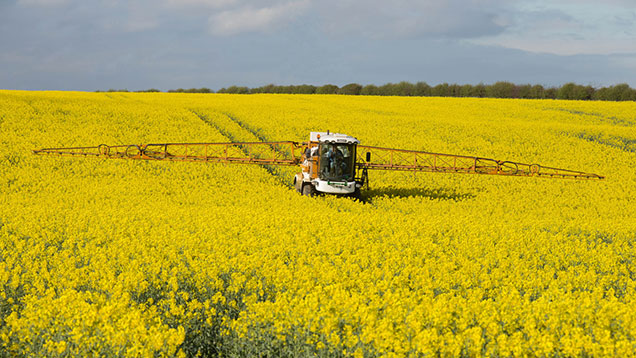 As thoughts start to turn to cropping for the 2015-16 season, predictions suggest that oilseed rape will be the main casualty of rotational changes as farmers cut back or drop it altogether.

Experts are forecasting that the disappointing margins on offer will result in a 5-10% reduction in the UK crop area, with some rumours suggesting it could be as much as 30%. In Germany, the crop area is already down by 16% for 2015.

According to Stuart Hill, national technical and development manager with Frontier Agriculture, oilseed rape hasn’t helped its cause by putting in a very variable performance in the last few years.

“Yields didn’t excite anyone in 2014,” he recalls. “And there are a whole host of reasons why that might have been – patchy establishment, flea beetle damage, light leaf spot and verticillium wilt (see p34), to name just a few.”

A look at the figures suggests that the overall cost of growing the crop is now around £1,050/ha, he reports. “That’s with both fixed and variable costs included – fixed costs account for £450/ha, with variable costs at £600/ha.”

Within that, crop protection costs account for £325/ha, he continues. “Given current constraints, those are going to be difficult to reduce, especially for weed and disease control.”

Where the crop is going to remain, Mr Hill’s advice is to focus on yield. “Clearly every farm is different, but higher output will help to dilute these so-called variable costs.”

There’s little doubt that oilseed rape is the crop coming under the most scrutiny on farms at the moment, agrees Zantra’s technical director Chris Bean. “And it’s not just because of falling prices – there are compelling agronomic and management reasons too.”

Weed control in oilseed rape has become expensive and difficult, he points out. “Added to this, it can be a problem to spray in the spring, it’s a difficult crop to combine and there are often timeliness issues at establishment. Pigeons, slugs and pollen beetle all add to the challenges.”

Lower commodity prices have highlighted rising growing costs, he continues. “It’s gone from being a relatively cheap crop to grow, to becoming one of the most expensive. At the moment, the margins for beans are much more enticing.”

David Leaper of Agrii believes that there might be a 10% reduction in the oilseed rape area next autumn, but doesn’t see a greater shift than that.

“There are rotational changes afoot and our grower group members have indicated that they will be cutting back. But oilseed rape has been one of the main break crops for the last 20 years and growers are set up for it.

“The three-crop rule and blackgrass have an influence; even heavy land farms, which previously wouldn’t have entertained the idea of growing spring barley, are now drilling the crop.”

Both spring wheat and spring barley are cheaper to grow, he acknowledges. “That’s in their favour when you compare them with oilseed rape. And the proliferation of AD plants in some areas means that energy crops are now being grown on land that previously had oilseed rape.”

However, growers shouldn’t be too hasty, he stresses. “They know how to grow oilseed rape and there are some consistent, high-output varieties with very good levels of disease resistance now.”

These provide an opportunity to reduce the number of sprays applied, especially in the autumn when it can be difficult to get on the land, he explains.

“There’s Clearfield, which allows you to get the crop established at a low cost, before deciding whether to treat it. It involves a post-emergence approach, so keeps costs down at the beginning.”

The other is HOLL oilseed rape, which will command a premium, he says. “It’s a niche and the premiums have dropped a bit. But they still stand at £25/t, and there’s no yield penalty with the newer varieties.”

John Hawthorne of Flawborough farms near Newark, Nottinghamshire, has moved away from growing winter oilseed rape every other year, in a wheat/rape rotation, despite seeing oilseed rape yields increase to over 4.5t/ha.

He has replaced much of his rape with maize for energy, and has also introduced spring barley on to the heavy land farm. “We were spending much more on the rape and were still having a real battle with blackgrass. There were also issues getting the crop established in time in poor seasons.”

At John Sheard Farms Ltd in Cambridgeshire, blackgrass is the main reason for the rotational changes made by HGCA Monitor Farmer Russell McKenzie. He has introduced spring crops and hybrid barley, at the expense of oilseed rape, which is struggling to compete financially.

“It’s become very expensive to grow and it doesn’t provide the cleaning opportunity that it used to. Add in falling commodity prices and the neonicotinoid ban, and there’s a big question mark over the crop’s future,” he says.

Manager Keith Challen is also reducing the frequency of oilseed rape growing on the 1,200ha Belvoir Fruit Farms in Leicestershire, in an attempt to reduce slug and blackgrass pressures, as well as address soil organic matter level.

“Gross margins are so low, that a six-year rotation will be better than the wheat/rape system which has served us well for 15 years.”

The implementation of the Water Framework Directive is also casting a shadow over the future of oilseed rape on many farms.

Agrochemicals key to the crop’s profitability have come to the attention of regulators over the last few years, having been consistently detected in water at levels above the standard set by the EU legislation.

As a result, field operations involving the use of these products on farms located in Drinking Water Protected Areas or a Safeguard Zones, are likely to be restricted, or may even have to cease.

The active ingredients concerned – metaldehyde, carbetamide, metazachlor and propyzamide – are not the only offenders as far as water is concerned, points out Jo Kennedy of the Environment Agency, who stresses that solutions will have to be found in order to meet government policy objectives.

“Measures for preventing these pesticides reaching water are only effective if enough growers in the relevant catchments are prepared to adopt them,” she says. “We need good uptake of the right practice.”

In the case of metaldehyde, the UK’s main slug control active ingredient, monitoring and testing of water supplies continues during periods of peak use, as does work looking at how slug pellet use can be targeted according to risk.

“With the water companies, we are assessing field-by-field targeting, to see whether it has a role in helping the industry to comply with the Water Framework Directive, as well as securing the long-term future of metaldehyde for the majority of farms,” she explains.

For some growers, that does involve more stringent measures. “It is a collaborative approach, with open dialogue between everyone involved. There’s tremendous willingness to find a solution which works for all.”

As a result, four pilot areas where there’s a voluntary ban on the use of metaldehyde on identified “high risk” fields are already under way, the Mimmshall Brook and Pinsey Brook catchments in Hertfordshire, the Avon and Leam catchment in Warwickshire and the Pitsford catchment in Northamptonshire.

Growers in these areas are being encouraged not to apply any metaldehyde-based slug pellets at all to fields identified as high risk. With methiocarb not available anymore, the only alternative is to use ferric phosphate-based pellets if slug control is required.

The oilseed rape area is on the decline with farmers becoming frustrated with its high costs, lower margins and the growing number of technical challenges. However, it will remain a key break crop offering an early entry and spreading the harvest workload, providing the sector does not lose any more actives, particularly metaldehyde and autumn herbicides.