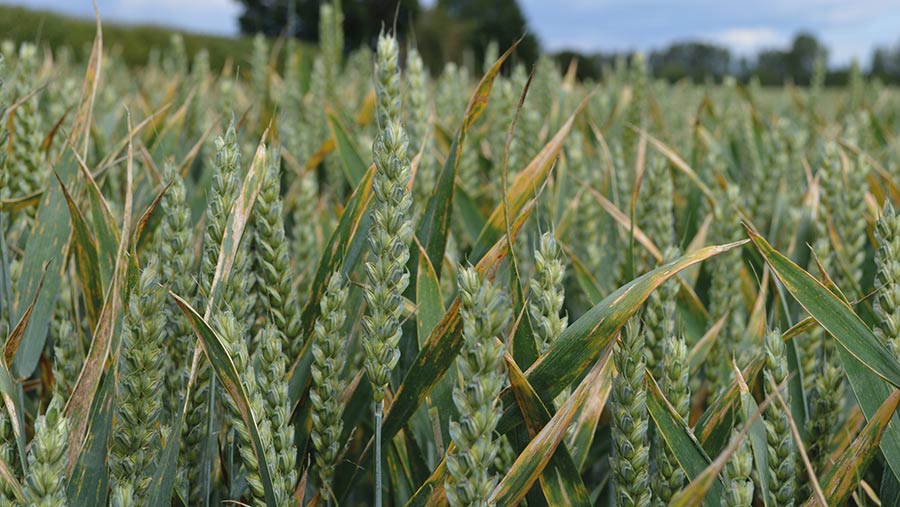 Winter wheat growers who match up their choice of varieties and drilling dates to disease-controlling fungicide programmes could trim their spraying costs this spring.

Agrochemical costs are being driving higher by rising energy costs and disruptions due to the Covid crisis.

But picking a wheat variety with good disease resistance and drilling it late in the autumn could potentially save £10-15/ha on fungicides.

Ben Giles, commercial technical manager for agrochemicals group Bayer, says drilling from mid-October onwards with a variety with good disease resistance could save growers money in their disease control programmes.

“Drilling date is key. So with a later drilling and a strong variety, growers may be able to trim £10-15/ha off a programme, but certainly not £40 or £50/ha,” he tells Farmers Weekly.

One new wheat variety which could fit that bill for the future might be Dawsum, says Olivia Potter, technical specialist at the variety’s breeder KWS.

She expects the variety to be the top-selling feed winter wheat variety this autumn.

“We expect it to take 10% of the wheat market this autumn, making it number two behind milling variety Extase, and the number-one feed wheat,” she says.

The variety which only entered the AHDB Recommended List at the end of last year is set to leapfrog others into second place.

The top five wheat varieties in the ground at the moment are Extase, Gleam, Skyscraper, Skyfall and Graham.

Dawsum has the second highest fungicide-treated yield at 104% – just behind another newcomer Champion at 106%.

It has the top untreated yield of 92%, the second highest specific weight at 79.4kg/hl just behind one of its parents, Costello at 80.6kg/hl.

It is also as stiff strawed as Gleam, but has better straw strength than Champion.

This is on a 1-9 scale, where 1 is susceptible and 9 shows good resistance.

The Recommended List moved to showing two scales for septoria resistance following the 2021 season, as septoria variants were able to overcome resistance in the older variety Cougar, and many varieties with Cougar in their parentage show a lower one-year septoria score.

Gareth Bubb, Bayer’s commercial technical manager for Herefordshire – where pressure from the wet weather disease septoria is greater than in the drier East – says that Dawsum could prove popular in his area.

“Dawsum could be a natural successor to Costello in Herefordshire due to its extra yield and good specific weight,” he says. 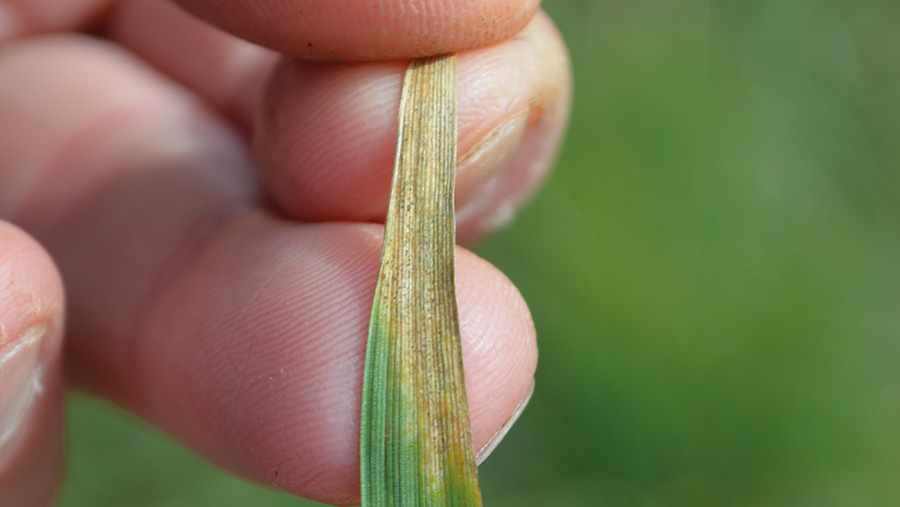 Last year, he saw yellow rust coming in earlier than usual into Herefordshire crops and septoria levels escalating through the season.

The amount of septoria rose sharply between 2 June and 14 June, as the season turned wetter after a generally dry spring.

For wheat growers trying Dawson for the first time, Mr Bubb suggests using an SDHI-azole product at the T1 and T2 timing, such as his company’s Ascra (SDHIs bixafen + fluopyram + azole prothioconazole).

If the relatively inexpensive azole tebuconazole is used at T0 for yellow rust control and a prothioconazole-strobilurin mix at T3, fungicide costs could still be kept to about £100/ha.

Early drilling is prevalent in Herefordshire, where there is little blackgrass and a desire to get good ground cover before the wet winter.

With these early drillings in September and early October, it is unlikely growers will be able to cut fungicide costs back much from this level.

But for those that can drill in November, they can probably cut back on inputs at T1.

If growers are looking at Extase primarily for its good septoria resistance, he suggests not to drill before 1 October because it is a very quick-developing variety which could get too proud before the winter.

Dawsum is a later developer, so it has flexibility to be drilled early or late in the autumn.

Further east in Oxfordshire, where Bayer’s Mr Giles is based, the disease pressure is generally lower – although more yellow rust was seen in 2021 than usual and septoria came late into wheat crops.

However, he would still choose a SDHI-azole product at T1 and T2.

For drillings in late October and into November, growers could easily cut £10/ha off costs with a T1 of the group’s lower priced SDHI-azole mix Aviator (bixafen + prothioconazole), or even a reduced rate of Ascra.

Mr Giles emphasises the importance of drilling date and variety before considering a fungicide programme.

Dawsum, like other varieties such as Costello and Siskin, shows good juvenile resistance to yellow rust, although Extase does not show this attribute.

If the very effective and relatively inexpensive azole tebuconazole is ever banned – and, therefore, its use at T0 to control yellow rust curtailed – the juvenile yellow rust resistance may become a more valuable trait in the future, as an increasing number of wheat growers may look to miss out a T0 spray.

More than half of the winter wheat varieties on the current AHDB Recommended List are resistant to yellow rust at the young-plant stage, according to the UK Cereal Pathogen Virulence Survey (UKCPVS).