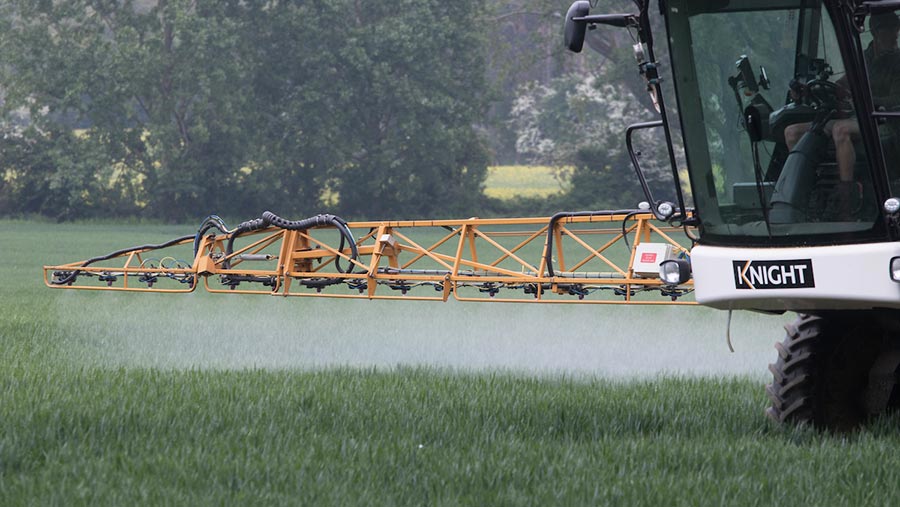 The multisite fungicide chlorothalonil – the mainstay of many disease control programmes in a range of crops – has finally gone, following an EU ban on sales last year and the end of its use-up period earlier this week.

Having been the foundation of disease control strategies for more than 50 years at a cost of just £4/litre, its loss is expected to be felt by growers and agronomists in their efforts to maintain output while keeping costs of production down.

Without chlorothalonil, both disease control and the protection of single site fungicides against resistance are at risk, with programmes expected to become more expensive as alternatives are used.

Maintaining good septoria control with existing products in the short-term is less of a concern than the multisite active’s role in resistance management, agree experts, especially as its loss comes at a time when the toolbox is diminishing at an alarming rate.

She stresses that growers must continue to use a combined anti-resistance and disease management strategy.

“Protecting the life expectancy of other fungicides is important,” she says.

“We have to find a way of retaining the mixture and diversity in fungicide programmes, while avoiding over-reliance on a few key products or individual components.”

For that reason, advice on resistance management is unchanged and the same guiding principles apply, even without chlorothalonil.

Making maximum use of the lowest-risk fungicide options, such as multisites, while only using the high-risk fungicides when you have to, is important.

Mixes that include diversity and making the best possible use of low-risk chemistry is the most responsible course of action, adds Prof Burnett, who points out that it’s a win-win in economic terms, too.

“The less chemistry that you use, the more helpful it is for preventing resistance and the less likely you are to overspend.”

Chlorothalonil will be missed because it was effective, low risk and cheap, she adds.

“It was easy to include and meant that you almost got an anti-resistance strategy for free.”

Other multisites are not as effective as chlorothalonil in terms of disease control, but they do have a place and are at low risk of resistance, she stresses.

“Folpet is next in line. It’s useful and allows you to reduce the rates of other chemistry, but it comes at an extra cost to chlorothalonil. That’s going to be hard to swallow.”

This year – with chlorothalonil vanishing mid-season – folpet can be added to the flag leaf and the ear sprays in wheat, if required, she points out.

“Next year will be different. The debate will be whether to use two 1.5 litre/ha applications of folpet at the earlier spray timings, before switching to mancozeb for the ear spray, or whether to take a different approach.”

Ramularia management at T2 will be a challenge in barley without chlorothalonil, she acknowledges.

“There is more chemistry available in barley and scope to mix and alternate actives, which is good. The use of lower rates and fewer timings is also helpful.”

However, the ramularia chemical control options are now few and far between.

“It has been very dry this year, which will have reduced the disease risk a bit.

“Without chlorothalonil to rely on, try to reduce any stresses on the crop and use fungicides with some efficacy, such as prothioconazole or Revystar [fluxapyroxad + mefentrifluconazole].”

However, crops destined for malting and brewing can’t be treated after growth stage 45 with Revystar, warns Prof Burnett.

“Otherwise it can be used right up to the end of flowering and performs slightly better than prothioconazole on ramularia.”

Folpet has given very mixed results against the disease in Scotland, but has performed well in Ireland, she notes.

“Consistent control has been hard to achieve. Ramularia is a stress-related disease, so that may have had an influence on our results.

“It’s important to manage other diseases and nutritional deficiencies, as well as known stresses such as complex tank mixes.”

New products in the pipeline offer some hope for ramularia control in the future, with genetic resistance being a longer-term target.

“Growers have moved on from the poorest varieties, so there has been progress.

“Unfortunately, chlorothalonil going has increased the risks attached to barley growing,” she adds.

Updated advice from FRAG-UK on managing the threat of fungicide resistance without chlorothalonil is on its way, confirms SRUC’s Fiona Burnett.

The latest advice should be put into practice alongside cultural and agronomic measures that reduce disease risk.

The loss of chlorothalonil is unlikely to be a problem in England this year, as most growers will have used the product in the way that they wanted to before the cut-off date, says Alice Montrose, Oxfordshire-based agronomist with Strutt & Parker.

“It was more of an early-season-use product,” she says. “That use has largely already taken place in 2020.”

The active had two things going for it – efficacy and price.

“It was so cheap and we saw a return on investment where it was used. So even in crops where there are alternatives to chlorothalonil, the ban means disease control will become more expensive.”

The timing of its demise is unfortunate, given the current uncertainty in the farming industry, she believes. “It comes in conjunction with other chemical losses. We know that epoxiconazole is heading for the exit door.

“Farm businesses are also coping with a reduction in BPS payments and fluctuating commodity prices.

“The added uncertainty of future disease control programmes is another challenge.”

Looking ahead, she points out that folpet and mancozeb are both existing alternative multisites to chlorothalonil, while there are new products on the market and in development that bring more diversity and will help to plug some of the gaps.

In wheat, chlorothalonil’s septoria control of about 60% has been very useful, helping to keep the crops green and photosynthesising, to produce yield.

“There is a consistent yield benefit from using chlorothalonil at T1, and although direct benefits are difficult to determine from T0 applications, an application of chlorothalonil at growth stage 30 certainly takes the pressure off the chemistry at T1 and T2,” she reports.

Of course, there are other things that can be done to help with septoria, she points out.

“Sound agronomy is required. Making the right choices on variety and drilling date, for example, and using early nitrogen to get the crop growing away quickly out of winter all play a part.

“The arrival of Revystar and the forthcoming introduction of Inatreq are positives, too. They bring options and other ways to protect chemistry.”

An independent agronomy trial comparing chlorothalonil, folpet and mancozeb, along with the anti-sporulant sulphur, gave some interesting results last year and helped with her future plans.

“Folpet gave good results on septoria – working almost as well as chlorothalonil and giving a yield benefit,” she summarises.

“However, its higher price tag means that its use doesn’t always stack up. In a bad year, under high disease pressure, it will pay.”

The cost of folpet is around two-and-a-half times that of chlorothalonil, she points out, which is why it may be restricted to the situations where it shows a return.

In contrast, mancozeb did not work well in terms of septoria control, while sulphur only had a small effect.

The anti-resistance role of chlorothalonil can be covered by folpet and there is merit in including it in the mix for this reason, she continues.

“It protects the other chemistry. Doing the right thing comes at a cost.”

Whether elicitors, which work by priming the plant’s natural defence mechanisms, can be used in an anti-resistance role remains to be seen, she adds.

“They may help to keep plants healthy and so reduce the pressure on fungicides, rather than protect single-site actives.”

In barley, the loss of chlorothalonil is a problem where ramularia is concerned, she notes.

“This year, when there’s a lot of spring barley in the ground, it’s a real concern.”

Other chemicals for ramularia control are far less effective, with many already affected by resistance. The alternative multisites seem to have little effect, although they will do something.

“The issue with ramularia is that it’s not a consistent threat,” she advises.

“The weather plays a big part and chlorothalonil had a place as an insurance treatment, in case it developed into a ramularia year.”

While there are manufacturer claims for the new fungicide Revystar, Ms Montrose has not seen any independent data on its performance in a ramularia situation.

“So we will feel the loss of chlorothalonil in barley, even though the disease is not a predictable danger.”

She also flags up pulse crops, where chlorothalonil has been used to good effect.

In beans, Alto Elite (cyproconazole + chlorothalonil) was the standard for controlling chocolate spot and rust, where it did a good job at a reasonable price.

“We have Signum [boscalid + pyraclostrobin], which works well on rust but not chocolate spot, and there’s also Amistar [azoxystrobin].

“Both are more expensive and neither give the chocolate spot control that we are used to.”

Three different fungicide programmes were tested on the winter wheat variety Extase, which has good disease resistance, at Heathcote Farms in Bedfordshire last year, one of which was without any chlorothalonil.

Farms manager Andrew Robinson, the current Farmers Weekly Farmer of the Year, looked at ways of future-proofing his fungicide strategy, as well as investigating how to get the best from the variety’s disease ratings. 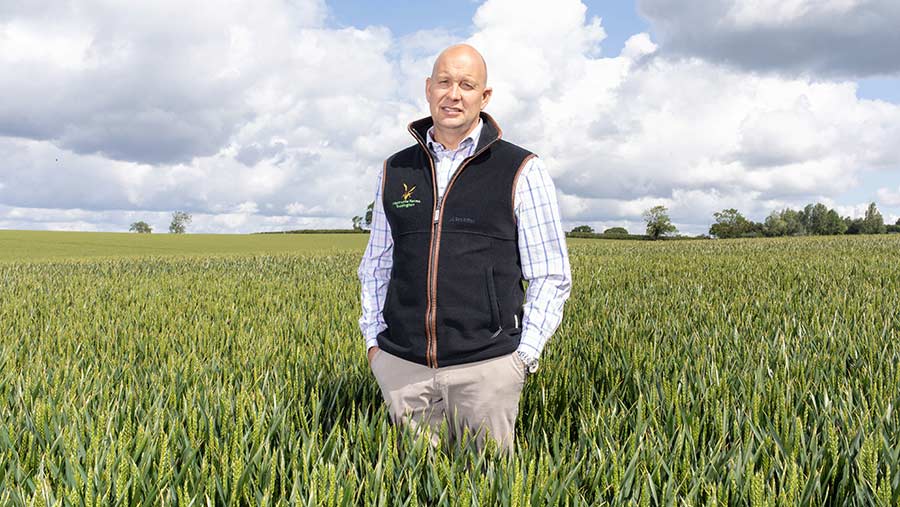 One of the first to grow the Group 2 winter wheat Extase, which has a 8.1 rating for septoria, he compared his farm standard fungicide programme with both a low input approach and a no-chlorothalonil regime during the 2019 season.

All of the programmes performed well, with target yields met and disease controlled.

The highest yield of 12.56t/ha came from his farm standard programme of five sprays , but the low input approach gave 11.88t/ha and the no-chlorothalonil regime came in at 11.79t/ha – both of which consisted of three sprays.

As Mr Robinson points out, chlorothalonil has underpinned his fungicide approach for years, so learning how to cope without it is a priority.

“The arrival of varieties that give more flexibility with fungicides is important and I’m not sure that we would have seen the same results with a susceptible variety,” he says.

“The weather also plays a major role in disease pressure and every year is different – we have to make decisions based on what we see in the field, rather than setting out at the beginning of the season with a rigid plan.”

While all three programmes were effective last year, he is uneasy about leaving out a multisite component in future.

“Going forward, my gut feeling is that we will be including some other multisite – either folpet or mancozeb – for the protection of other chemistry. It would be irresponsible not to.”

His other point is that he believes the variety being grown plays a significant part in the final results.

“We only grow varieties with a 6 rating or more for septoria on this farm and I’ve got no intention of lowering that standard.

“As we lose more active ingredients, genetics are going to be the main focus.”