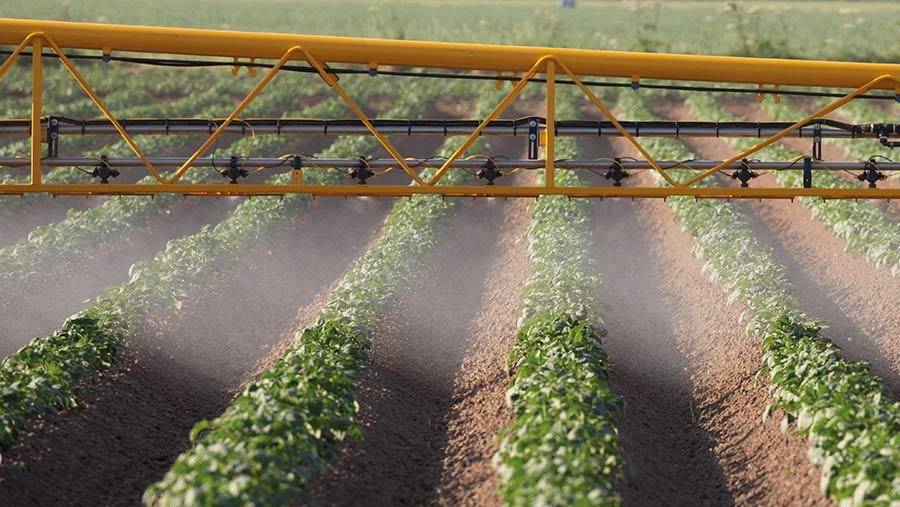 While mancozeb appears to have a stay of execution for at least this season, just how much product will be available for blight control in potatoes remains unclear.

Some mancozeb-containing products won’t be available, agronomists believe, and how long stocks will last of those that are still being manufactured is uncertain.

That means while most potato agronomists hope to be able to recommend mancozeb for another season, attention is turning to how to replace it, if, or perhaps more likely when, the Chemicals Regulation Division decides to endorse the decision made late last year by European regulators for non-approval.

Here are six potential solutions suggested by three potato agronomists from around the country.

See also: The rules for arable farming in an NVZ in England

“We do have a good blight spray armoury,” says Graeme Skinner, agronomist for Provenance Potatoes, based in Kent.

“I don’t see controlling blight per se as too much of a problem, but it will come at a cost and we have to be aware of resistance management.”

That’s why mancozeb will be sorely missed if it is de-registered – at around £8-£10/ha, mancozeb-containing products such as Curzate offered cheap control of late blight and alternaria, which could be slotted into programmes early in the season and later, especially when blight pressure was lower.

And with a multisite mode of action, it also helped protect some of the more effective chemistry with single-site modes of action from resistance development.

The cheapest alternatives start around at least £15/ha, according to Yorkshire-based potato agronomist John Sarup, with the best chemistry in Corteva’s Zorvec Enicade coming in about £38/ha.

“It is important to tailor products and applications to weather and perceived risk, with little point using the most expensive products if you’re in a dry spell, with no chance of leaf moisture.”

In the best-case scenario where mancozeb was only being applied a couple of times early in the season, replacing it with cheap alternatives might only increase costs by £15/ha, he says.

But for first and second early crops, where mancozeb products made up the bulk, if not all, of the programme, the impact on costs might be much higher, he adds.

Both Mr Skinner and independent Norfolk agronomist Martyn Cox suggest the cost implications might be more severe. “It could easily double in cost,” Mr Cox says.

And with costs of herbicide programmes increasing from £30/ha to £45-£80/ha and CIPC (chlorpropham) replacements to prevent sprouting in store costing £4.20/t an application compared with 90p/t, it’s another inflationary cost growers can ill-afford in a challenging market environment.

“All of that can quickly add up to £1,000/ha,” says Mr Skinner. “If you’re only averaging £1,600/ha profit, potato growing becomes marginal. A high-risk crop with a marginal return is a difficult situation to be in.”

The supply industry must recognise those pressures, Mr Cox stresses. “The cost of growing potatoes has gone up massively, yields have plateaued, and the price is where it was 20 years ago. We’re a long way past reaching a pinch point.”

Possible replacements for mancozeb include various combinations of dimethomorph, cymoxanil, fluazinam, zoxamide and propamocarb, suggests Mr Sarup. “If you’re growing for Bartletts, you can’t use propamocarb.”

Fluazinam had been widely dropped from programmes with the discovery of the resistant 37_A2 strain of blight, but latest monitoring suggests it is tending to be found more in the West, and less so in the East.

If you’re confident on which strains you have, you could bring it back into the programme in mix with something else, Mr Sarup is not alone in suggesting.

But understanding of which blight strains are in your locality in-season might be at risk with the future of AHDB’s blight scout network and its “Fight against Blight” service uncertain following the vote against continuing AHDB Potatoes.

Two possible ways of reducing cost are to use lower doses or to lengthen intervals between sprays.

Mr Sarup feels reducing doses is too dangerous to consider because of the risk of resistance developing – without the multisite mancozeb, resistance risk from using actives with single-site modes of activity is going to increase anyway.

But he could see a place for lengthening intervals using Zorvec, which would also reduce the number of applications.

“You can’t dismiss the £11-£12/ha cost to apply each blight spray – depending on how many hectares you grow, that’s quite a significant cost.

“That covers seven to eight weeks of the blight programme, and depending on the crop I might only need another four or five applications.”

“There are some interesting products using different modes of action that could potentially help fill the gap,” Mr Cox says.

Those include the use of phosphite, which induces defence reactions within the plant and has a direct inhibiting effect on the growth and sporulation of oomycetes.

It is registered in the UK, currently within some fruit fungicides. Swedish research suggests its use in combination with lower doses of blight fungicides is promising. “That sort of technology does offer some hope,” he adds.

Another possibility could be the use of well-timed foliar feeds, suggests Mr Sarup.

“The main constituents of mancozeb are manganese, copper and zinc. Foliar feeds containing those nutrients are available, so I wonder if well-timed applications, in mix with cymoxanil, up until rapid growth might boost plant defences?”

But as with combinations of conventional fungicides, more research is needed to understand how nutritional products and biostimulants could potentially help.

4. Put pressure on supply chains to use more resistant varieties

Good progress is being made by breeders to improve blight resistance in potatoes, but it is still a challenging area.

“There are some varieties with excellent blight resistance, which work well in organic production,” says Mr Cox.

“What we need as an industry is pressure on supply chains to use them.”

That’s not straightforward for many reasons, not least because other characteristics are also vital – for example, we currently lack varieties with good resistance to both blight and Globodera pallida potato cyst nematodes (PCNs).

Then there are quality characteristics, such as fry colours for the chipping trade and dormancy for storage, plus consumer demand for certain varieties, notes Mr Skinner.

“We’re asking a lot because we want PCN control, blight control, perfect fry colour, long-term storage and for it to yield more – it’s a big ask without going into the GM or gene-editing world.”

“It is very difficult because you have to take account of climate, inoculum and varietal resistance. We’re struggling with inoculum especially. We went a lot of last season without blight, yet blight was being predicted.”

But a combination of spore trapping and weather station data and forecasting, together with varietal resistance, might help overcome that limitation, he believes.

Local climate is so important to blight development, Mr Sarup warns, that spore traps and weather stations might need to be in virtually every field for decision support systems to have a real impact.

6. Think about how blight integrates with other factors

Solutions to other problems could potentially help against blight, Mr Cox suggests. “If we had varieties that didn’t get common scab, we wouldn’t need irrigation early on, which drives blight pressure early and would allow more flexibility around spraying.