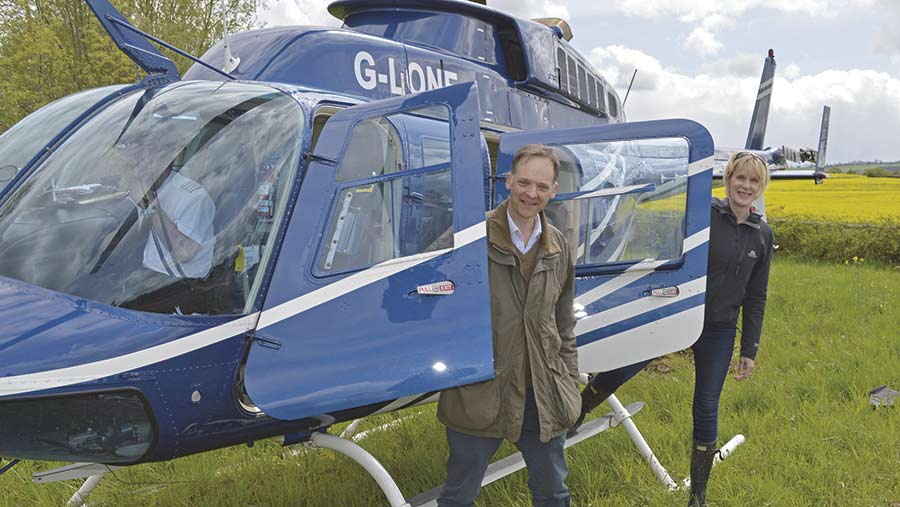 Warmer wet weather is seeing yield-sapping septoria leaf blotch start to spread through wheat fields, with the more susceptible varieties most at risk from the disease.

The cold winter kept disease levels low, but with the advent of higher temperatures septoria is now climbing up wheat plants, and with an unsettled forecast ahead, fungicide protection is set to be vital.

With many early-season T0 fungicide sprays simply not applied due to waterlogged fields and with septoria inoculum ever-present in wheat crops, the current wet spring weather is set to raise the disease pressure.

What is Crop Doctor?

Farmers Weekly joins Bayer and two independent experts in a helicopter to assess disease levels from above nationwide.

Fiona Burnett, cereal disease expert at Scotland’s Rural College, said growers’ strategy should be all about protecting the yield-bearing top leaves between now and flag-leaf stage.

“Warm and wet weather will encourage septoria to appear, and then help to infect other wheat plants,” she told Farmers Weekly.

The heightened disease risk and the omission of many T0s is encouraging growers to use a SDHI/azole/multisite fungicide mix at the important T1 spray timing, especially where there are thick, lush crops.

In such a late spring season, Prof Burnett said growers might be helped by a likely narrower gap between T1 and T2 of three weeks, rather than as much as 4-5 weeks in some years – which will allow them to stay on top of disease.

“The wet weather may have held growers back from going too early with their T1 sprays, which are targeted at a full emergence of leaf three,” she added.

Jonathan Blake, cereal disease expert at crop consultant Adas, said the keys for disease development would be the weather in May and measures to protect SDHIs after these fungicides have shown a decline in sensitivity in controlling septoria.

“A showery warm May could accelerate the infection already in crops, and this could result in a disease epidemic,” he warned.

Mr Blake noted that there was a marked difference between wheat varieties, with septoria-susceptible varieties likely to need a SDHI-based mix at T1.

This means that for the more resistant varieties, such as Graham, Sundance and Gleam, an azole-multisite could be appropriate at T1 rather than using an SDHI in the mix.

To assess the risk to crops across England, Farmers Weekly took off in the Bayer Crop Doctor helicopter with the two experts, travelling to four sites across the county.

The team visited a yellow rust “hotspot” in south-east Lincolnshire, a septoria-susceptible site in Herefordshire, as well as sites in  Oxfordshire and North Yorkshire. 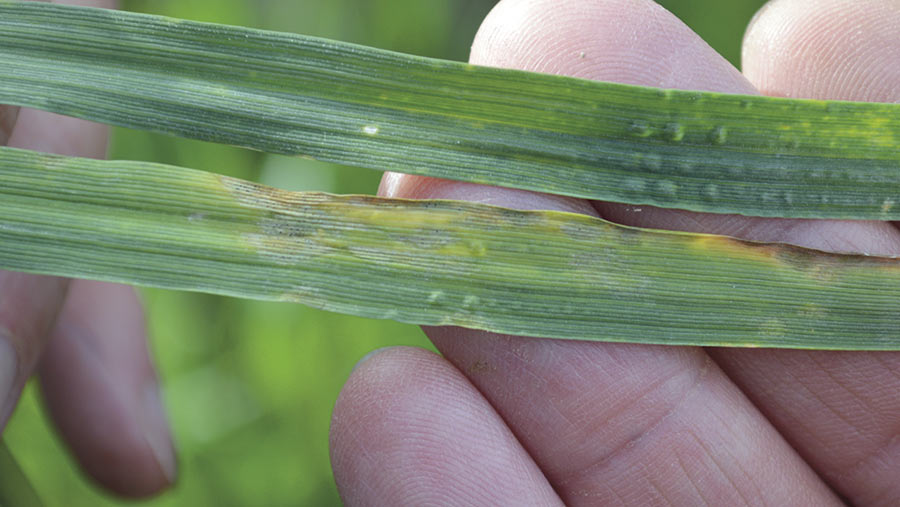 Septoria is spreading in David Hoyles’ wheat crops in south-east Lincolnshire while yellow rust had been easy to find in some susceptible varieties, forced him to rejig his fungicide strategy.

Only a fraction of his crops received a traditional T0 spray – containing just a multisite – but when yellow rust was spotted in Graham and Jigsaw, he had to move quickly and spray those with an azole-multisite mix.

“Four weeks ago we had very little disease, but now we have quite a bit coming through of both septoria and yellow rust,” he said.

This means he has opted for a SDHI/azole mix at T1, applied in the last week of April, and also plans a “fairly robust” SDHI-based T2 application.

His initial plan had been to use SDHIs at T2 and T3 on some of his crop to try to retain green leaf for longer, but that was abandoned due to the increased disease pressure in the early season.

Prof Burnett said septoria levels on the farm were as bad as she had seen them over the past few years, adding that high moisture levels would help the disease to develop and spread.

“We are looking at thick lush crops, so this is a classic situation for using an SDHI fungicide at the T1 stage,” she said.

Mr Blake added that with lots of latent infection still likely to show, this was a clear case for using an SDHI, certainly on the more septoria-susceptible varieties along with an azole and multisite.

Darren Adkins, commercial technical manager at Bayer, said a lot of septoria had moved into the crop in the third week of April and it was now a case of getting the timing of the T1 spot-on when leaf three was fully emerged.

“Leave it too late and growers will struggle for any curative action. Go too early and it will not give full protection to leaf three,” he said.

Mr Hoyles grows 180ha of winter wheat on his 700ha Monmouth House Farm at Lutton, 12 miles east of Spalding, and aims for high yields on his rich fertile silty soils. 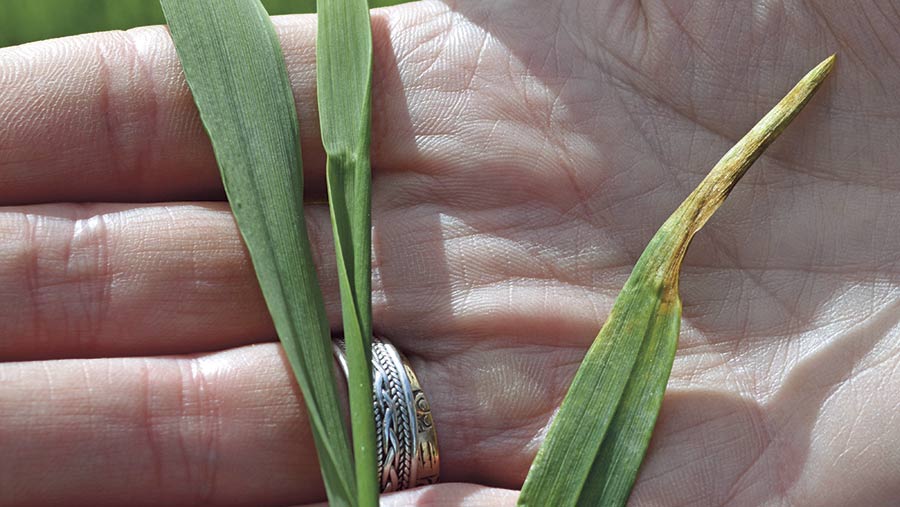 Septoria was clearly present in winter wheat at this northern site, with these more backward crops likely to approach the T1 fungicide spray timing in the first week of May.

The leaf botch disease was seen at the bottom of many varieties on leaf six on the crop, which was drilled on 5 October, and with leaf three only about a quarter emerged.

Prof Burnett said this crop, at the most northerly of the four Crop Doctor sites, was typical of many in Scotland with low levels of septoria clearly seen on the bottom leaves of thin crops.

“Septoria is clearly present quite low in the crop, but the key will be how it develops from here,” she said.

The site at the Stockbridge Technology Centre near Cawood, about 10 miles south of York, is on fertile silty clay soils close to the River Ouse and capable of producing high yields.

Mr Blake spotted septoria in all the wheat varieties at the trial site and also a bit of yellow rust in disease-susceptible varieties.

“Septoria is less of a concern than some of the other sites, but it is here and will require treatment,” he said.

Mr Blake suggested that backward crops of varieties with good resistance to septoria might need only an azole/multisite at T1, but the more susceptible ones might need an SDHI added.

Phil Jennings, plant pathologist at the crop science group Fera, said there was very little browning at the stem base in crops, which would be a sign of fusarium, but the disease would need warm and dry conditions in May to become a problem at ear emergence.

Adam Tidswell, Bayer’s local commercial manager, said septoria was the main concern at the site along with some stem-based browning.

The site has a T0 in the third week of April of the azole tebuconazole and multisite chlorothalonil, and he was looking to use an SDHI/azole/multisite at T1, and then again at T2. 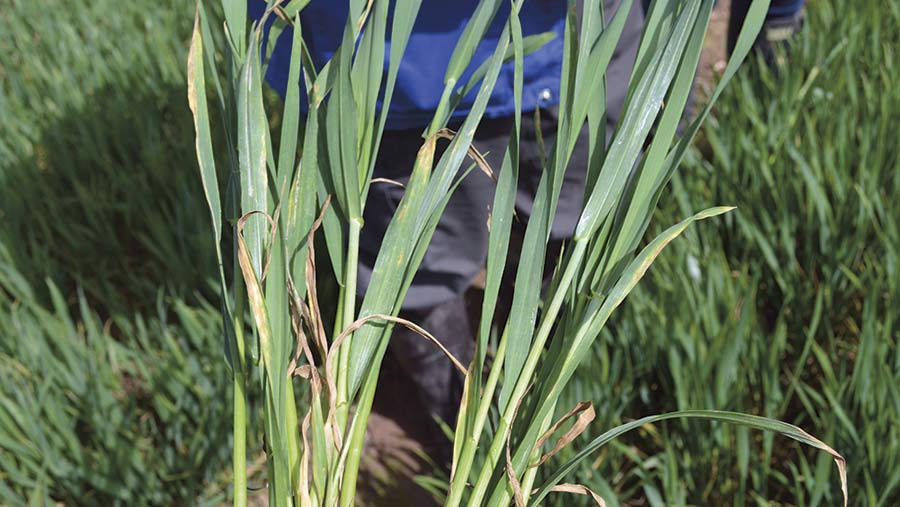 Disease levels were the highest in the wetter west, with septoria climbing up to leaf five of the most susceptible varieties at this Herefordshire site.

Mr Blake, who is based in the county, said there was a clear difference between varieties, with the less susceptible ones showing disease on leaf six and the more susceptible on leaf five.

“There is a higher disease pressure here, but again there is a marked difference between varieties, with the more susceptible probably needing two SDHIs and those with better resistance needing less SDHI,” he said.

Plots at the site which were sown on two different dates, 28 September and 8 October, were now virtually at the same stage, with leaf three about half emerged in the last week of April.

“Herefordshire has not let us down in term of seeing septoria, but again the story of sowing dates and variety choice is very clear,” said Prof Burnett.

Independent agronomist David Lines said virtually all the growers he advises in north Herefordshire had missed their T0s due to wet weather, so he was planning a robust SDHI/azole/multisite approach at T1.

“If the weather warms up we could be in for a nasty shock in terms of septoria, and the lower leaves could suddenly go dead,” he said.

Many of his growers had moved to less susceptible varieties such as Costello, Graham, Shabras and Skyfall as part of the fight against this wet-weather disease.

Gareth Bubb, Bayer’s local commercial manager, said he was seeing high levels of septoria and also more eyespot, largely because of the wet spring, and this disease might become more of a problem if May continued wet.

The trial site at Monkhall Court, Callow, is on a rich red Herefordshire loamy soil some three miles south of Hereford and close to the River Wye. 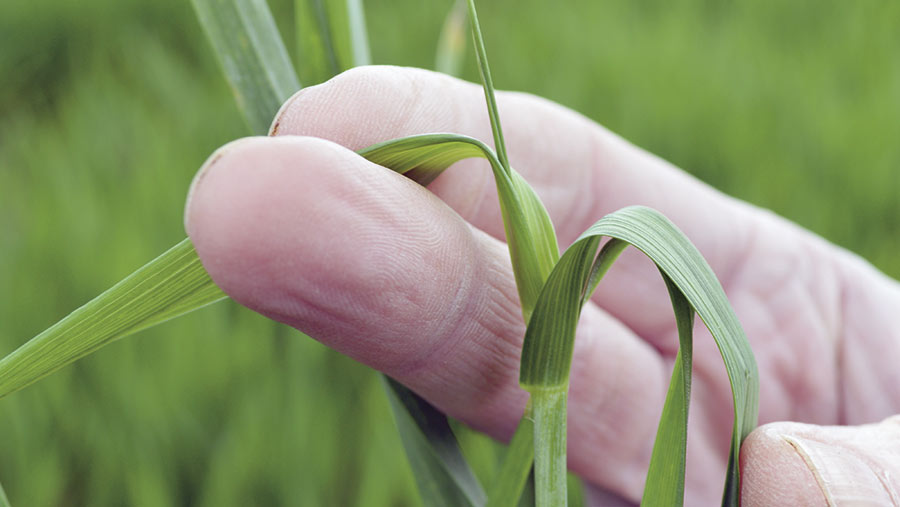 The Beast from the East cold spell put crops on this light land site under stress and may have allowed septoria to come in early and spread more quickly than expected.

Mr Blake said septoria was at lower levels here than in Herefordshire, but was greater than might have been expected on this generally high-yielding, low-disease site.

“Again septoria was easy to find on leaf five in susceptible varieties and lower down on leaf six in the more resistant ones,” he said.

Prof Burnett agreed that septoria was not as bad as in Herefordshire, but was high for this site and so the risk was increased for the disease to develop quickly over the next few weeks.

“We think the septoria progressed slightly quicker because of plant stress that came with the cold period in late February and early March,” he said.

Stress levels were particularly clear in the variety Sundance which has provided an interest with growers in the area, as it has the best resistance to septoria of any variety on the AHDB Recommended List.

Although this may be a characteristic of the variety, Mr Helliwell points out that Sundance was used by his Bayer team to win the top plot yield in Adas’s YEN project in 2017.

Ben Giles, also from Bayer, said that for late-drilled, disease-resistant varieties, if a T0 was applied then a prothioconazole azole-chlorothalonil multisite might be used at T1, but if the T0 was missed then he would advise using an SDHI/azole/multisite and the same approach at T2

The light land site is at Duxford Farm, Hinton Waldrist, and is 12 miles south-west of Oxford, just above the flood plain of the Thames.