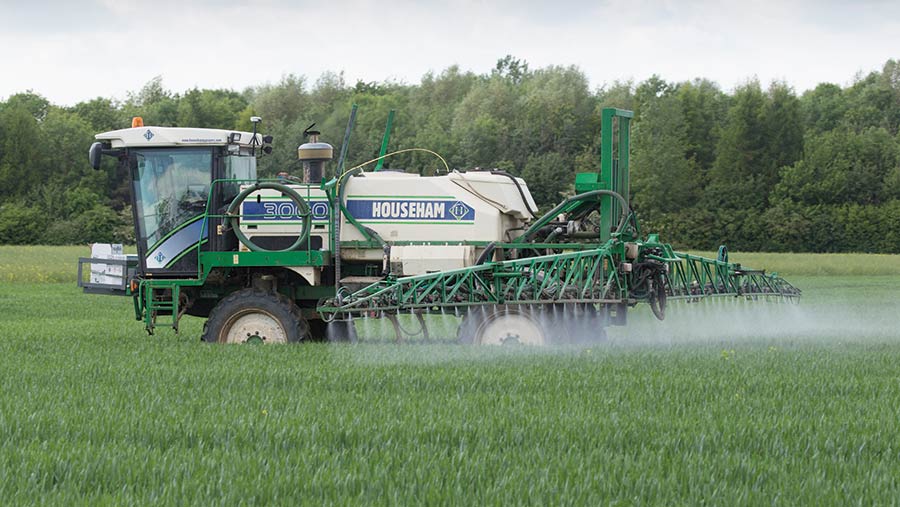 Three different fungicide programmes are being tested on Britain’s only commercial crop of a breakthrough wheat variety in Bedfordshire this season, which takes septoria resistance to a new level.

Farms manager Andrew Robinson is working with breeder KWS to understand more about getting the most from the Group 2 variety Extase.

With the only commercial crop of Extase being grown in the UK on 7ha this year, he has also included it in a 23-strong variety trial and is comparing it with other milling wheat varieties on the mainly heavy land at 1,150ha Heathcote Farms.

The variety’s septoria score of 8.1, and strong yellow and brown rust ratings of 9 and 7, mean that getting the most out of the disease resistance is one of his aims with the farm trial.

His other aims are to work on future-proofing his fungicide programmes, investigate how active ingredient losses can be managed within any seasonal constraints, and to maintain the farm’s very high production standards.

“We never set a fungicide budget at the start of the season,” Mr Robinson reports.

“We treat according to the variety, the weather and the current situation in the field, with a tendency to front load and then rein in later in the season, if conditions allow.”

Where does Extase fit? 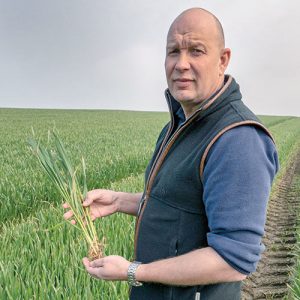 Andrew Robinson in a field of Extase wheat

Having a variety such as Extase in the farm’s portfolio brings a comfort factor, says Mr Robinson.

With high yields, strong disease resistance and earliness of maturity, it meets many of his requirements for a milling wheat and fits in well with his other Group 1 and 2 variety choices, Zyatt, Siskin and Crusoe.

“It gives us the opportunity to be more flexible,” he says. “We’ve already seen that it can’t be farmed by the calendar and you have to be vigilant with its development.”

Since drilling Extase, miller Heygates has announced that it will be offering buy-back contracts for the variety, which Mr Robinson welcomes.

“It was the only thing missing. We’re in the right location for their mills and management of the crop will be left up to us.”

Mr Robinson’s yield target is 11.5-13t/ha – something he has been able to achieve consistently on the farm, along with hitting the full milling wheat specification.

“At this stage of the season, the potential is all there and crops look good,” he reports. “Extase is the most vigorous variety I have ever seen, especially in the spring. It has a huge biomass.”

One immediate concern for 2019 is the weather forecast, following a dry winter. With very little rain expected for the next six weeks, he changed his nitrogen management and had applied all of his wheat crop’s requirement of 242kg/ha by the beginning of April.

“That has put pressure on all of our crops. We started applying nitrogen in mid-February, which is the earliest we’ve ever been. It means we may have to change our plant growth regulator use and are likely to bring in Terpal [ethephon + mepiquat].”

Since the KWS Extase went in the ground early last October, the multisite fungicide chlorothalonil has fallen foul of the EU reapproval process.

So his previous decision to have a no-chlorothalonil programme as one of the fungicide regimes has taken on a new urgency.

“Chlorothalonil has underpinned our programmes for years,” says Mr Robinson. “Even with the arrival of varieties such as Extase, which give more flexibility with fungicides, it is still a big loss.”

Speculation that a much cheaper two-spray programme will be enough on more resistant varieties such as Extase may not be achievable without the multisite, he notes.

“In the right season, it’s a possibility. But every year is so different that it would be wrong to set out with that plan.”

As a result, he has opted to compare his farm standard programme with both a no-chlorothalonil and a low-input programme, as he looks ahead.

With all three regimes, seasonal variables are being factored in. There has been no T0 spray used in the no-chlorothalonil and low-input programmes, with the farm standard programme having its chlorothalonil-based T0.

Given Extase’s high septoria rating, the programmes will differ on this disease, confirms John Miles of KWS, who points out that the lack of curative activity in current fungicides is less of an issue with a highly resistant variety.

“While there is scope to cut back with a variety like this, there’s no blueprint,” he stresses.

“Our work with Andrew on this farm will provide some useful pointers, but there will always be seasonal fluctuations and site differences to account for.”

At the time of Farmers Weekly’s visit in the second week of April, the very clean crop of  Extase was about to get its T1.

The farm standard approach is to use an Aviator/Amistar Opti (azoxystrobin + chlorothalonil) mix, unless it turns wet – in which case he will switch to higher rate Aviator plus chlorothalonil.

“Across the mix of varieties we grow, there might be a rust job to do and we will need to take care of stem-based browning,” reports Mr Robinson.

The other two programmes will use different products. The no-chlorothalonil programme has Firefly at T1, while the low-input programme will be based on prothioconazole and has the option of including folpet.

Growers will be able to choose between a single-year buy-back contract or one spanning several years, confirms miller Heygates.

They will also be able to opt for a range of protein levels, from full specification at 13% to culinary flour at 11%, and will not have to follow a growing protocol.

Premiums will be set on a minimum/maximum basis and will reflect distance to a Heygates flour mill as well as grain quality.

T2 plans are still being developed, but he expects to use Elatus Era in the no chlorothalonil programme and Aviator Xpro in the low-input regime. The farm standard programme often includes a T1.5, as there can be a four-week gap between T1 and T2.

“If it’s very dry and there’s no rust, we won’t bother with a T1.5 spray. Product choice at this timing depends on what we’ve already used.”

The existence of an accurate weather forecast for 14-21 days ahead would allow Mr Robinson to have firmer plans for May.

“The weather has such a bearing on disease pressure and our ability to spray on time. Unfortunately, there isn’t such a system available.”

Otherwise, he will use a full programme of biostimulants and trace elements on the wheat, which is standard practice on the farm.