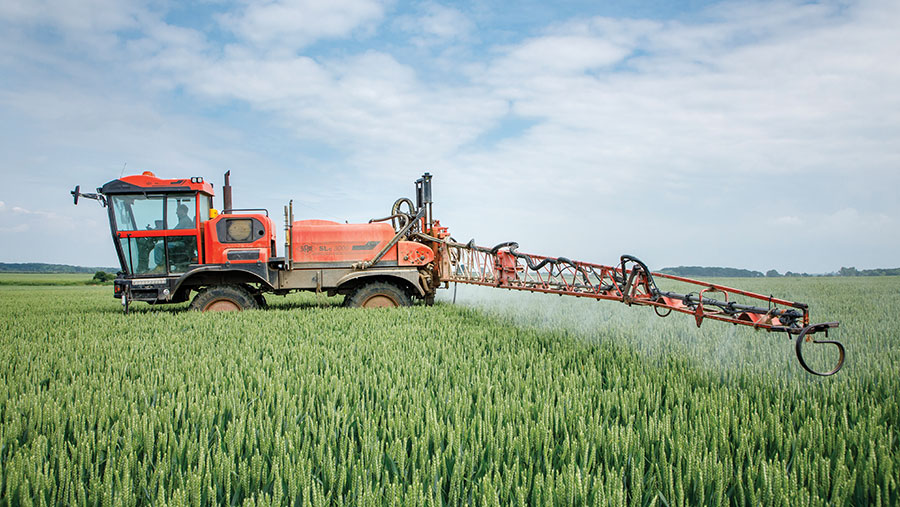 Protecting crops against the damaging effects of fusarium ear blight is essential in any year, but it could be even more so this season, given the reduced wheat area and strong premiums for milling wheat.

Fusarium and its associated mycotoxins are not just a concern for milling wheat growers, though, as the different forms of the disease can affect yield and quality in all the main cereals: wheat, barley and oats.

As there are legal mycotoxin limits on grain for human consumption, and guidance limits on crops intended for animal feed, it is vital to protect all crops.

Several species of fungi cause symptoms that may be commonly referred to as ear or head blight, but of primary concern to UK growers are the two microdochium species, nivale and majus, and the “true fusarium” species, F culmorum and F graminearum.

Assess risk on your farm

This simple scoring system can be completed online or downloaded, and allows individual fields to be rated for specific risk factors.

There is also a mycotoxin rainfall risk tool that allows users to generate a risk score for rainfall during the critical flowering (growth stage 59-69) and pre-harvest (growth stage 87-harvest) periods to add to the risk assessment.

Ear blight symptoms include whole, or parts of, ears becoming bleached white above the point of infection from the milky ripe stage, and grains turning pink when infected.

“It’s unusual to see any leaf symptoms of true fusarium, unless a lot of inoculum has built up in a dry spring, which is then followed by very wet weather, as we saw in 2012,” says Philip Jennings, principal plant pathologist at Fera.

The seed-borne pathogens Microdochium nivale and M majus are usually included in the fusarium group of fungi.

These species affect crops from earlier in the season, causing pre- and post-emergence damping off, poor establishment, foot-rot, and stem-base browning or lesions. Yield losses can be up to 13% in bad seasons.

The presence of fusarium does not automatically mean there is a high mycotoxin risk, as only some species produce mycotoxins and they require specific climatic conditions to develop and infect grain.

The true fusarium species, F culmorum and F graminearum, are the main species that produce the mycotoxins deoxynivalenol (DON) and zearalenone (ZON), for which there are legal limits in any wheat, barley and oats intended for human consumption. Guidance limits apply to feed grain (see the AHDB website for more information).

Microdochium species do not produce mycotoxins.

F langsethiae is associated with production of the T-2 and HT-2 mycotoxins, which are not currently subject to legal limits and have different risk factors to DON and ZON. “T-2 and H-2 risk is greater in drier summers and are more of an issue in oats, however most toxin is in the husk,” says Dr Jennings.

How does weather increase risk?

While many factors affect fusarium risk, the weather, especially around flowering (growth stage 59-69) and pre-harvest (GS 87), is a major determinant.

The build-up of fusarium and microdochium inoculum on crop debris is favoured by a warm, dry autumn and spring. Rain during flowering splashes spores up the plant, allowing ear infection to occur, especially in warm, humid conditions.

Once infection is present, rain in July and August may spread spores further and, importantly, increase the movement of DON from the glume, where it is produced, into the grain. 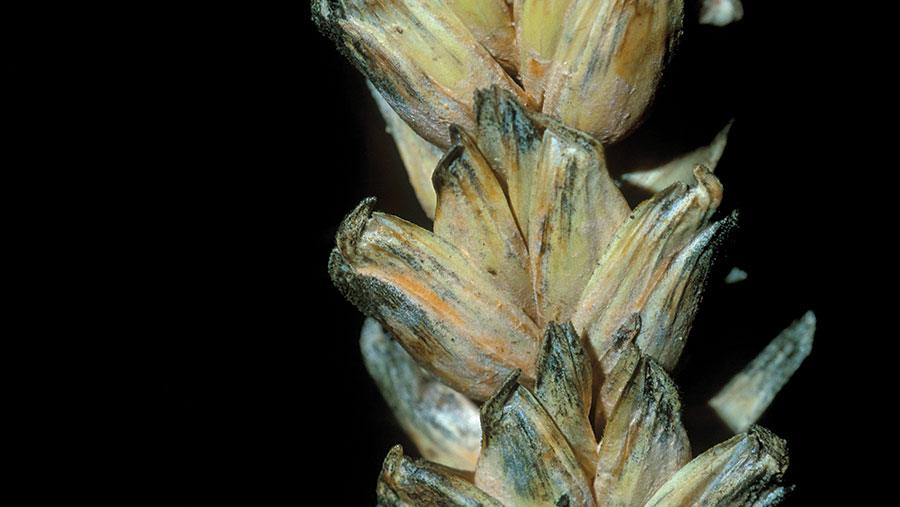 Wet weather and saturated soils last autumn and winter, combined with more late-drilled wheat, may have reduced the initial autumn inoculum build-up, but this has been countered by a relatively dry, warm, spring, says Dr Jennings.

“Conditions have been ideal for both fusarium and microdochium so far this spring, although inoculum build-up has started from a low base. Saying that, if it’s a wet flowering period, we don’t need much to kick-off a fusarium outbreak.”

Moist conditions at the end of May will further help disease development and lead to the production of tell-tale spore-containing perithecia (small, black balls) on debris in the base of crops.

How can risk be reduced?

A robust, well-timed T3 fungicide remains the best way of mitigating fusarium risk in-season, but it should be used as part of an integrated control strategy. The presence or varietal risk to other late-season foliar diseases, particularly brown rust and septoria, should also be considered when deciding which product to use.

Dr Jennings says prothioconazole-based products, such as Proline, are still the most effective for ear blight, as it is the only azole that controls both fusarium and microdochium species. A “robust dose” is essential, which typically means applying at least 150g/ha of prothioconazole.

Evidence suggests earlier applications of a prothioconazole-based fungicide at T1 or T2 can help reduce inoculum build-up, but it is not a substitute for an effective T3, Dr Jennings continues.

Ideally, the T3 spray should be applied around early to mid-flowering (GS 61-65) to maximise curative and protectant activity.

It is vital to achieve good spray coverage of the ear. Trials by Fera and Harper Adams University have previously found double-fan, angled (33deg) nozzles to be most effective at achieving this, in some cases improving efficacy by up to 30% over vertical, single-fan nozzles.

In most years, there is unlikely to be a need for a second ear spray (T4) for fusarium control, unless the flowering period extends significantly beyond the usual five to seven days and disease pressure is very high, Dr Jennings says.