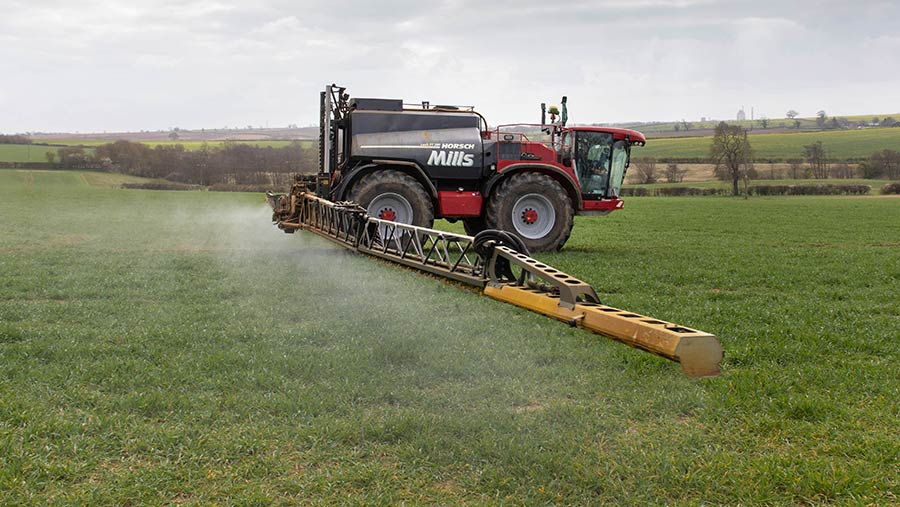 Recent approval of the SDHI active fluopyram in barley crops is set to offer stronger activity against the three main barley diseases this season.

Containing prothioconazole + bixafen + fluopyram, Ascra from chemical manufacturer Bayer is now approved for one application in a season for both winter and spring varieties, for control of rhynchosporium, net blotch and ramularia.

Importantly, the broad-spectrum fungicide has full Maltsters Association of Great Britain approval for malting varieties and a cut-off date of growth stage 61, which is ideal for those targeting premium markets. The optimum spray timing for ramularia control in spring crops is GS49, when the first awns become visible.

Fiona Burnett, head of knowledge exchange and innovation at Scotland’s Rural College (SRUC), where the product was trialled, explains that its greater loading of SDHI makes for good disease control.

In SRUC spring barley trials, Ascra gave a slight uplift in yield over Siltra, which could be down to physiological properties.

“We know that plant stress is a factor in ramularia infection, so any benefit in plant health is helpful. Much of the SDHI family have these additional properties, which we saw with strobs,” she adds.

Tom McCabe of the Irish Agriculture and Food Development Authority, Teagasc, agrees that the newly approved fungicide will benefit barley disease control due to its higher SDHI loading.

He considers rhynchosporium the major winter barley threat in Ireland and throughout much of the UK. A polycyclic disease, it can cause multiple infections of crops and research has shown that this trash-borne disease can be spread by infected seed.

Mr McCabe says: “There’s probably no better place than Ireland to test fungicides for wet weather diseases, and Ascra has proved a consistent performer in Teagasc’s winter barley rhynchosporium trials, with yield responses of 0.3t/ha over Siltra and Revystar.”

As barley is a sink capacity crop, ear numbers are vital for yield. “The T1 is all about tiller protection and retention,” he says. “That SDHI loading is also giving an uplift to net blotch control, and with a good dose of prothioconazole it is effective against mildew too.”

He is not opposed to the use of prothioconazole twice in a winter barley programme. However, he does not recommend this when used at the T0 timing and suggests cyprodinil or spiroxamine instead.

Bayer’s Scottish technical manager, Grant Reid, says the approval of Ascra in barley is welcome, with fungicides so critical to disease management.

“Barley genetics have got better in recent years but we don’t have any equivalent to Extase in barley varieties,” Mr Reid says.

Of 27 recommended winter barley varieties, just six get a score of seven for rhynchosporium (on a one to nine scale, where nine is the highest resistance), and of these all are rated below six for net blotch.

In spring varieties, only four have a rhynchosporium rating of six or better. “Fortunately, Ascra is a very strong all-round fungicide, delivering effective control across the spectrum,” Mr Reid says.