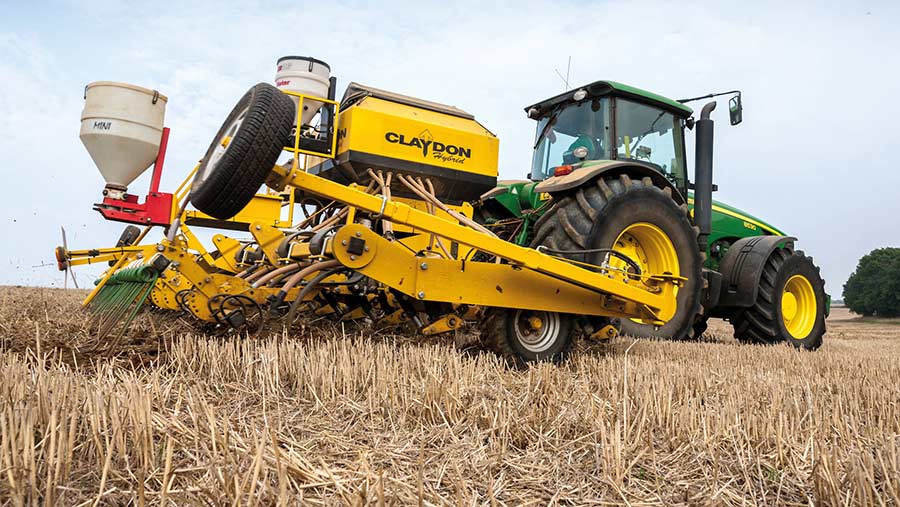 Growers considering planting winter wheat following spring barley next autumn are being warned of the increased risk from the soil-borne fungus take-all, which can cause yield losses of up 2t/ha in winter wheat.

The pathogen, which damages root systems in winter wheat crops is worse when preceded by barley or wheat, as this offers a host for fungal inoculum and can raise soil disease levels.

With the area of spring-sown cereals at its highest level in years, some winter wheat crops planted this autumn are, therefore, likely to follow a prior spring cereal, making take-all attacks more likely.

Jim Knight, seed business development manager at Frontier, explains how the pronounced cropping shifts will impact future harvest plans and how the return to a normal rotation this autumn is not expected.

“The area of winter wheat established this season was 62% of its 1.8m hectare five-year average, with the centre of the country greatly affected by the weather, with 42% of the area planted,” he says.

Consequently, there was a considerable rise in spring-sown cereals. Spring barley witnessed a huge 77% increase in area planted, which reached over 1.1m hectares, an area larger than that of winter wheat.

“Over 170,000ha of additional spring wheat was also planted this year, up from its 30,000ha average,” highlights Mr Knight.

As growers aim to maximise margins to make up for losses this harvest, next year’s winter wheat area is, therefore, expected to be nearly 2m hectares, well above its five-year average.

“Growers are wanting to maximise their profits to make up for income losses this season, and because winter wheat offers the biggest and most bankable gross margin on farm, the area planted will be higher,” he points out.

However, Mr Knight warns growers as they plan to plant winter wheat after spring barley that the threat from take-all in second cereal crops should be at the forefront of their minds, especially as many forget spring barley acts as an excellent disease host.

He also highlights how the continued decline of oilseed rape area is expected to further lift take-all infection risks as its area planted is down by 150,000ha from last year.

“The reduced amount of cereal break crops in the rotation, with no obvious successor for rapeseed creates the likelihood for more second cereal crops or continuous wheat crops to be grown,” he says.

Jonathan Blake, associate director of crop protection at crop consultancy firm Adas explains the heightened risk of take-all this season and what growers can do to help limit the spread of the disease.

He highlights that take-all is most active in the spring and summer when soils are warmer, at 10C or above, as this is when the pathogen’s activity increases.

As farmers may be considering drilling earlier this season, after the wettest autumn and winter for nearly 50 years, the gap between harvest and drilling may narrow, reducing the length of time between crops which can bring additional weed, pest and diseases threats to the following crop.

“Early sown crops are at greater risk from inoculum infections as seeds are more likely to be planted when soils are still warm and take-all is active. Wheat drilled later, say the second or third week of October, is planted in a cooler seed-bed where there’s less primary infection,” advises Mr Blake.

Second and third wheat crops are threatened the most by take-all, with barley less susceptible to infection.

“This is suspected to be a result of barley determining its yield earlier in its growth stages, which occurs before peak take-all activity during the spring,”

Wheat, however, undergoes its critical yield formation period post-flowering from early June to July, which coincides with the take-all activity period.

He also adds that minimum tillage and direct drilling cultivations increase take-all risk because cereal stubble has the ability to carry the pathogen over to the following season.

Lighter, more drought-prone soils are also more prone to take-all, as are soils with low pH.

Mr Blake points out that rotation offers the main management tool for disease control and still remains the weapon of choice today.

However, he advises that the right variety choice can help mitigate the disease. Cultivars such as Gleam or Skyscraper offer higher second wheat yields, while those with greater stem carbohydrates can help prevent yield loss from infection within the plant.

“No variety has resistance against take-all, but some do have a bit of tolerance and choosing a variety with this can really help,” he admits.

Soil health and nutrition applications also play an important control method. Early applications of nitrogen in the spring enhance root development, enabling the roots to grow away from the pathogen – meaning crops are less vulnerable to attack.

“Having a one-year break gives you the next season free from take-all, but it’s important to remember that second wheat can still be impacted as disease levels start to rise again,” says Mr Blake.

Mr Blake concludes that particular attention should be given to land left fallow where weeds and volunteers have had the opportunity to establish, or where cover crops contain host species, as these can carry infection into following crops.

The specialist fungicide seed treatment Latitude, which contains the active ingredient silthiofam, is the only product available for controlling the soil-borne fungus take-all.

Harry Raley, northern technical specialist at Certis, which manufactures the seed treatment, explains how the product successfully reduces the disease and proves a cost-effective way to maximise yield and quality, where take-all is problematic.

“Trials of Latitude-treated winter wheat grown after spring barley have shown yield responses of 0.65t/ha across 13 trial sites in the UK and northern France,” he says.

“The active kills the fungal infection around the roots, creating a zone of protection that allows the new seedling to successfully develop,” he adds.

However, he warns growers that Latitude is a take-all specific seed treatment and does not offer control of other seed and soil-borne diseases that single-purpose dressings control.

“You cannot simply swap Latitude with a single-purpose seed treatment, they must be co-applied.”

Costs for Latitude seed treatment range from £31-£41/ha, depending on the seed rate used.

Take-all effects can be reduced by drilling in late October or early November, with Latitude recovering yield losses from drilling later in the season to the same levels of an early-sow date in late September or early October.

Mr Raley also highlights that a cost-benefit calculator is available on the Certis website, which allows growers to insert the expected price of their crop, the cost of Latitude seed and their drilling seed rate to calculate their return on investment.