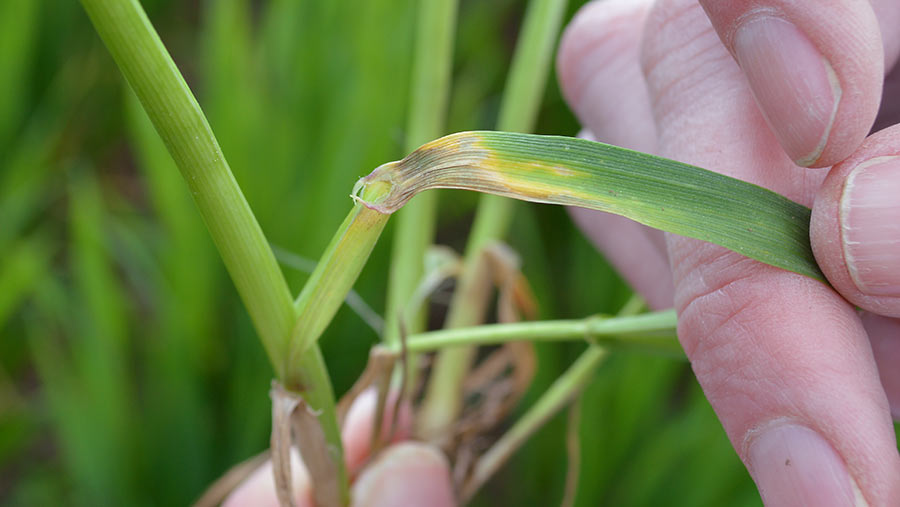 Britain’s biggest farming company, Velcourt, spent an economical £90/ha keeping its 16,000ha of winter wheat free of serious disease last year, and this season the spend is set to be focused on later sprays.

The wet spring has led to many of the group’s wheat crops missing out on an early-season T0 fungicide, so subsequent T1 sprays have been beefed up, meaning this season’s spend is unlikely to be down.

See also: Crop Doctor: Septoria lurks, ready to strike in a wet May

The rainfall in May and how it may encourage the wet-loving septoria will determine the total fungicide seasonal spend.

At the moment the plan is to apply a robust SDHI-based T2 fungicide, as this is where the biggest yield effect can be seen.

Ryan Hudson, one of the group’s agronomists, says the target spend for wheat fungicides is £80-£100/ha, while the average spend on first feed wheats over the past 16 years comes to less than £100/ha, albeit with a large variation.

However, he is cautious about this season, with one eye on the weather, especially with some varieties having well-known disease weaknesses.

“Warmer weather will speed up the development of septoria, so we are most likely to use a robust SDHI-led fungicide at the T2 flag-leaf stage,” he told Farmers Weekly.

There is no group budget for wheat fungicide sprays, with each farm’s individual budget taking into account specific factors.

The overall result is that yields were just shy of 10t/ha across all the group’s first wheats last harvest. 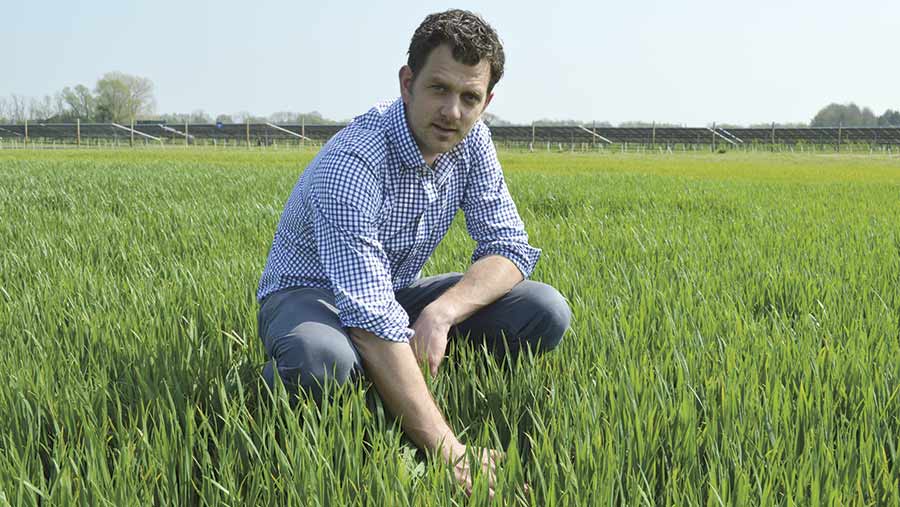 Planning for the group’s disease strategy is based on variety choice and drilling date, with the focus on more septoria-resistant wheats. Drilling dates are also being pushed back.

“We have clearly moved towards better, more septoria-resistant varieties such as Skyfall, Siskin and Graham, while we are also looking at Sundance,” Mr Hudson says.

Brian Redrup, the company’s farms director for the Midlands region, says drilling date is dictated largely by blackgrass, and where this grassweed is a problem, delayed drilling is a must. An added bonus is that it also helps limit disease development.

“We drill relatively little of our 16,000ha of wheat in September, with most sown in early and mid-October,” he says.

With an eye on resistance to the SDHI fungicides, the group’s budget includes just one SDHI, but this season the single-SDHI strategy may not be the best approach and two are most likely to be used.

This season, the late, wet spring prevented many T0 azole-multisite fungicide sprays being applied, saving about £10/ha, and this has seen the cost of T1 sprays pushed up to compensate, and many have included an SDHI.

“Where T0s have not gone on, a more robust T1 has been applied as we look to use the strongest products when the disease pressure is the highest,” says Mr Hudson.

Although an SDHI is not budgeted at T1, this year – given the rainfall, the likely latent septoria in crops and the absence of a T0 – the T1 will generally be more robust and an SDHI-azole-multisite mix.

Mr Hudson emphasises that the group generally plans for one SDHI to try to manage SDHI resistance as well as spend per hectare, but this season may result in two SDHIs being used in mixes with azoles and multisites to keep on top of septoria in the wet weather. 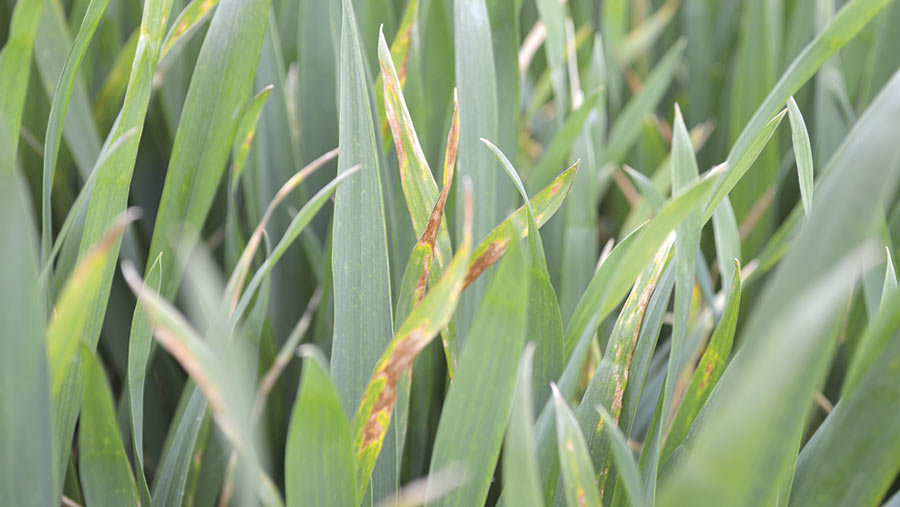 Septoria on the leaf

Where T0s sprays were missed this season, T1 applications were slightly early at 50% of leaf three emergence.

Therefore, a multisite T1.5, aimed at leaf two emergence, may be used to ensure the T1 to T2 interval is not stretched beyond three-and-a-half weeks.

But with the season developing so quickly and flag leaf sprays likely to be applied in the third week of May in most of southern and central England, the gap between T1s and T2s may be about three weeks and a T1.5 may not be needed.

Traditionally, the biggest fungicide cash spend comes with the T2, as this has given the best return on investment of all the sprays, and so an SDHI-azole-multisite approach is likely.

Again an SDHI-led approach may be followed for septoria, and where varieties have key weakness, such as Crusoe with brown rust and Reflection with yellow rust, T2 fungicides with added activity against rust will be used.

However, if the weather in May turns dry, and for varieties with good septoria resistance such as Siskin, Graham and Sundance, an azole-multisite approach may be followed, especially if crops have been drilled late after root crops and are thin, with a low yield potential.

“If conditions become very dry, with late-drilled resistant varieties where the disease pressure is lower, we may not automatically use an SDHI at T2,” says Mr Hudson.

“This year, many late-drilled crops did not tiller well and look too thin and we will have to assess the septoria risk to those crops,” he adds.

Differences in nitrogen fertiliser timings are quite apparent in crops and where nitrogen was applied in mid- to late February, tiller survival has been greater and the crops look healthier.

Crops where ground conditions did not allow the first nitrogen to be applied until late March or early April have suffered, with thinner plant stands in some cases, resulting in increased susceptibility to disease.

The group is well aware of the risk of SDHI resistance to septoria. Indeed, it found in its own monitoring that 26% of septoria isolates gathered carried an SDHI mutation, compared with 17% in 2017 and zero in 2016.

Therefore, Mr Redrup emphasises the group’s aim is to optimise production over a number of soil types, but still take into account factors such as septoria resistance and the yield potential of crops.

“We can’t insurance spray against every eventuality, but fungicide spend of £80-£100/ha is where we would like to be,” he adds.

The group farms 52,000ha of land under a variety of management arrangements stretching from the Moray Firth in the north of Scotland to Devon in south west England with a focus on arable and dairy farming.

Velcourt’s agronomy service also advises on 29,000ha of additional arable land through its agronomists and some of its farm managers.