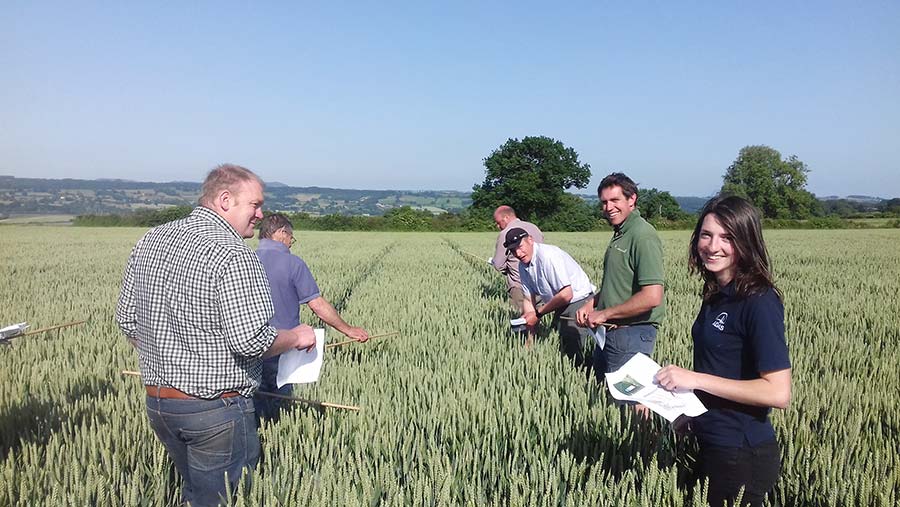 The competition saw entries from local growers, agronomists and agrochemical companies, but it was an Adas programme with a fungicide spend of £95/ha that won the day.

The event was organised by Adas Rosemaund to see if growers could beat the experts by devising their own fungicide programme and saw untreated plots, a ‘blockbuster’ programme and Adas’s optimum strategy using the popular wheat variety Graham.

Adas fungicide challenge: how it worked

The challenge, which took place in one field on a Herefordshire farm, showed that while the highest yield of 12.1t/ha came from the most expensive four-spray blockbuster strategy costing £188/ha, it gave the lowest margin over fungicide costs of £1,575/ha.

Chloe Morgan, research scientist with Adas, says it’s well known that a high loading of fungicide gives a yield benefit, but it isn’t always the most profitable approach, especially where growers are moving away from disease-susceptible varieties.

“With the greater uptake of resistant varieties, there have been many more queries about appropriate fungicide use. It isn’t all about chasing yield with these types – our challenge showed that some of the lowest spends had the highest margins,” she says.

The winning Adas optimum programme, which had a fungicide cost of £95/ha, resulted in a slightly lower yield of 11.88t/ha. However, it gave the highest margin of £1,649/ha – some £74/ha ahead of the belt-and-braces regime.

In the Adas experts’ approach, a T0 fungicide spray was omitted and the T1 treatment was scaled back, as it was so dry in March and April and disease pressure was low.

As a result, an SDHI fungicide wasn’t considered necessary at this stage, with half-rate azole epoxiconazole being applied with two multisites – chlorothalonil and mancozeb.

“We’ve done some work on mixing multisites that has shown it can give an advantage and we’ve always seen a benefit. There is a synergy and they work well together,” says Ms Morgan.

Lower pressure seasons do give options with fungicide choices. “You don’t always need an SDHI at T1 on varieties like Graham, which have good septoria resistance scores,” she adds.

Herefordshire farm manager Mark Wood of JPF Clay Farms came a very close second to the Adas experts, with a margin of £1,648/ha.

Assistant farm manager Jack Hopkins took third place, with a much lower fungicide spend of £59/ha and a lower yield of 11.49t/ha. His two-spray programme of a T1 and a T2 saw him come in with a margin of £1,638/ha.

The figures were based on a grain price of £150/t and an application cost of £12.63 per application.

Chloe Morgan, research scientist with Adas, says: “The results show that when inputs are targeted appropriately to varieties, there is scope for savings. Of course, the usual wisdom applies, as programmes also need to reflect the season, the site and other agronomic factors, such as drilling date.”

The T2 spray was based on the two SDHIs/azole co-formulation Ascra, with two multisites being added again, in the form of chlorothalonil and folpet.

This was followed by a T3 azole mix of prothioconazole/tebuconazole in the form of Prosaro at 0.8l/ha applied with another multisite, mancozeb – deemed necessary given heavy June rainfall.

“It ended up being a high-pressure season, so it was useful to see how the different programmes compared,” she adds.

Some of the farmer entries in the challenge regretted leaving out a T3 spray.

“It demonstrated the importance of being flexible and reacting to the season, rather than sticking to a pre-formulated programme. The T2 treatment was slightly delayed by the weather, which may also have had a bearing,” she says.

All entries did a T1 and T2 spray, with the use of T0 and T3 varying. An SDHI featured in every T2 treatment, with products from all of the agrochemical manufacturers being represented.

Decisions were made a week before spraying took place, giving everyone the opportunity to fine-tune applications based on the disease risk.