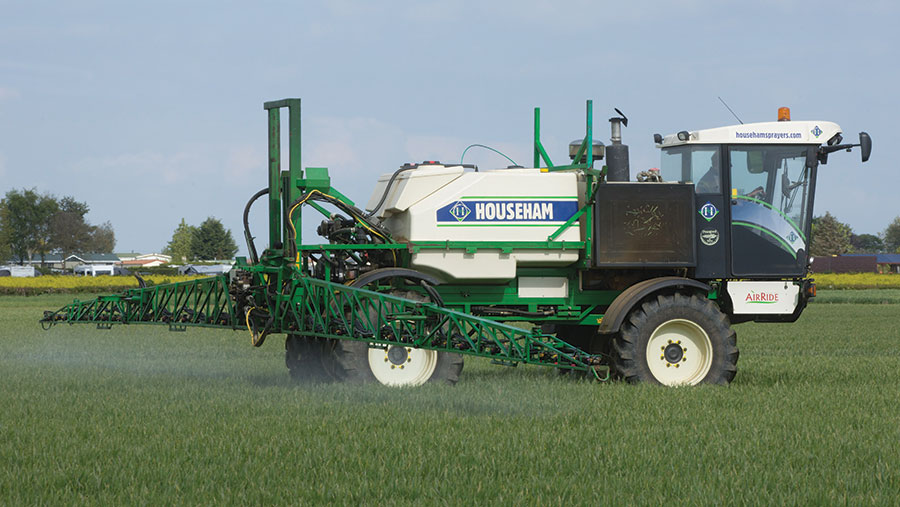 A new sulphur fungicide formulation and elicitor product could help fill the gap left by the withdrawal of multisite active chlorothalonil.

Sulphur applications for disease control were commonplace in wheat crops 40 years ago, with the element providing some multisite fungicidal activity on key diseases such as septoria.

The introduction of more effective synthetic fungicides left it out in the cold for many years, but as chlorothalonil is now banned and mancozeb is under threat, it could make an appearance in programmes once more.

It works through the process of sublimation, where the solid sulphur particles react with atmospheric hydrogen and convert into hydrogen sulphide gas, which shrouds the plant leaf.

As the gas is toxic to fungal pathogens, it has some effect on disease already on the leaf and offers protection against the establishment of any new spores for a period of time.

UPL’s national influencer, Pam Chambers, says sulphur can provide a similar level of activity to other multisites, and its contribution to disease control is relatively consistent from year to year.

The company also claims better rainfastness and, at rates of 2-3-litres/ha, it is more practical for sprayer operators than handling large quantities of the powder formulations used in the past.

It can be applied twice between growth stage 31 to 59 in cereals, with a minimum interval of 14 days between sprays. It is best used at T1 and T2 in wheat, alongside single-site-acting fungicides.

“It’s giving useful results in both wheat and barley, and because we are losing conventional options, these biocontrols are worth looking at again,” she explains.

Along with approvals on cereal crops such as wheat, barley, oats and rye, it is also available in sugar beet – where it used to be mainstay – for protection against powdery mildew.

UPL is exploring its protectant activity on cercospora, which has been an increasing threat for beet growers over recent seasons and has applied for a number of extensions of authorisation for minor use in other crops. So far, one has been granted for combining and vining peas.

For cereal disease expert Fiona Burnett, at Scotland’s Rural College (SRUC), sulphur can offer a benefit, but sometimes it is difficult to distinguish whether this is through disease control or a nutritional response.

However, she says that achieving the 90% control with conventional chemistry – something growers have been used to for decades with conventional options – may soon be a thing of the past as regulation and the development of fungicide resistance erodes options.

This is shining a light on older biological options such as sulphur, plus more recent developments such as elicitors, which Prof Burnett says looks more promising.

“It’s one of the things growers are most interested in at open events, as I’m often asked how close we are to having products ready to be incorporated into disease control programmes,” she explains.

Scotland’s Rural College has done some work with Iodus, an elicitor product that contains laminarin – a substance extracted from brown seaweed.

It has an approval for winter wheat, with a single application permitted up to first node detectable (growth stage 31). The maximum individual dose is 1 litre/ha, but UPL recommends 0.75 litre/ha at the T0 timing.

Simply put, laminarin works by switching on the plant’s natural defences, helping it to resist fungal pathogens through the key crop yield-building period.

Prof Burnett says SRUC’s trials have shown reduced disease infection when using the product, but timing it extremely important in terms of the end result.

If a crop has already been presented with a disease challenge, it will have naturally switched on its defences and the elicitor will be too late and provide less benefit.

Similarly, if applied too early, the energy cost of unnecessarily triggering a plant’s defence pathway can result in yield loss at harvest.

She believes the product is best used just before the traditional T1 fungicide timing, when the majority of plants have not been attacked, but it is a tricky balance to strike.

“These elicitors have genuine potential to reduce fungicide inputs where they work, and we know using lower doses of conventional products can be a big help when it comes to resistance management.

“However, there is still a lot to learn, and elicitors won’t necessarily be applied in all situations, as there can be a cost when they aren’t needed,” explains Prof Burnett.

Jonathan Blake, Adas disease control expert, agrees that the industry is in the early phases of understanding how elicitors work and where they dovetail with conventional programmes.

Adas work has also shown a reduction in septoria following applications of Iodus at T0, but at present he is uncertain about recommending its use over conventional chemistry until more research has been done.

“It’s one to watch, but so far it’s unproven and that makes it difficult to turn your back on actives like folpet, which offers 40-50% septoria control on a consistent basis,” he explains.