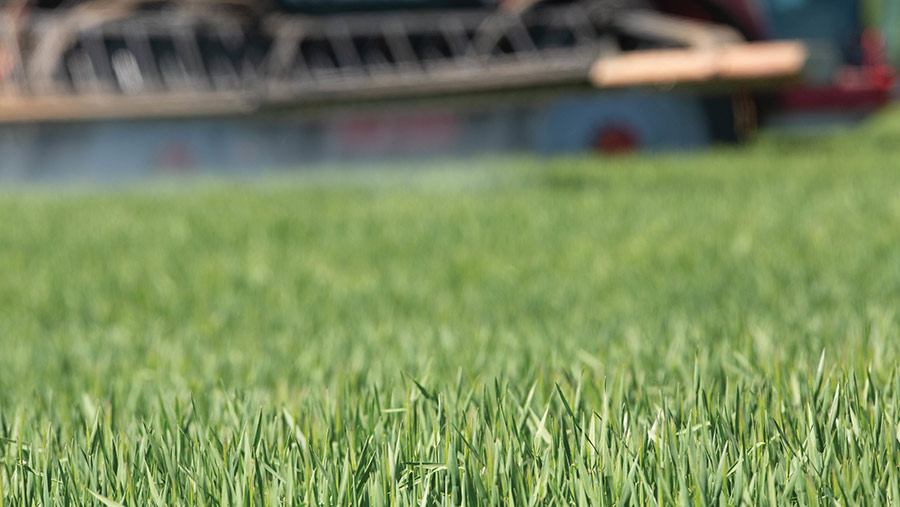 Spring barley growers need to make sure they have a ramularia-active fungicide in their T2 sprays this season as the best product for this disease is being banned this week.

Growers are advised to use one of two azoles to protect against a disease that can cut yields by up to 0.5t/ha, as chlorothalonil – which gives very good control – can not be use after 20 May.

Ramularia leaf spot thrives in warm and wet weather up to flowering, and then can spread further when barley plants come under stress, often from dry weather in the summer.

“If there is a history of ramularia in the field and there are wet and warm conditions then we would advise growers to consider Revystar, or if the risk is a little less then Proline,” he tells Farmers Weekly.

Dr Havis adds that the multisite fungicide folpet does have some activity on ramularia, and it would be useful to add it to one of these two azoles as an anti-resistance strategy.

The azole prothioconazole is contained in popular barley fungicide such as Fandango and Siltra as well as Proline, while new-this-season mefentrifluconazole, also known as Revysol, is sold in the azole-SDHI product Revystar (see below).

The current dry spring weather is reducing the risk from ramularia, but even the most effective fungicide for the disease, Revystar, is not as good as the old multisite chlorothalonil, and it also has an application cut off of growth stage 45 (mid-booting) for crops intended for malting and brewing.

The T2 spray timing in barley can range from flag leaf fully emerged (GS 39) to ear emergence (GS 59), but the GS45-49 “awns peeping” stage is seen as the optimum timing ramularia, so Revystar needs to be used promptly.

Dr Havis is hopeful that the new fungicide Inatreq, which has a different site of action to other systemic fungicides and is due to be launched next season, will have some activity against ramularia.

Symptoms of ramularia only appear after the crop has been under stress and tend to be seen on the upper leaves after flowering.

Initially, they resemble a fine spot, which then darkens to a square spot, bounded by leaf veins and surrounded by a chlorotic halo.

This stress may be a result of drought, waterlogging, poor crop nutrition or the use of a harsh formulations affecting the leaf wax.

Flowering is considered to be the main stress period that initiates changes in how the fungicide and the host interact.

Jonathan Blake, cereals disease expert at crop consultants Adas, says the current dry weather is keeping wet weather diseases such as rhynchosporium and net blotch at bay, but attention is likely to be on ramularia this season.

“Where ramularia is a problem, then Revystar is effective at robust rates, but it will be more expensive than chlorothalonil,” he says.

In December 2018, the AHDB suspended disease ratings for ramularia due to unreliable results, but work is under way to assess again varietal resistance.

There is little spread of disease resistance rating in leading spring barley varieties, with Planet, Laureate and Diablo all scoring 9s for mildew and 5s for brown rust, while Laureate makes a 6 for rhynchosporium with the other two being 5s.

This is on the AHDB Recommended List scoring system where 9 shows good disease resistance and 1 is very susceptible.

Older varieties, such Propino and Concerto, have slightly lower scores.

The UK spring barley area is set to be 47% higher at more than one million hectares this season, according to the AHDB Early Bird Survey, and two areas – Yorkshire and the East Midlands – will see the area more than double, so we take a look at the latest disease control advice for growers in these areas.

The earliest crops are reaching the end of tillering and so T1 fungicide sprays will start this week in the area, and will likely get a broad-spectrum fungicide mix to cover most disease threats.

Christine Lilly, technical manager at agronomy group Frontier, says she is seeing a wide variability in crops depending on soil conditions and time of drilling, and is spotting some mildew in crops, which is often linked to manganese deficiency.

Most of her crops will get a low rate of a three-way mix of an SDHI, the azole prothioconazole and a strobilurin to cover rhynchosporium, net botch, rusts and mildew, with chlorothalonil added for ramularia if applied before 20 May.

The T2 applications in early to mid-June will be a similar three-way mix, with folpet being used as an alternative to the banned chlorothalonil to give some ramularia activity.

“Ramularia may be a bigger problem this year without chlorothalonil and much will depend on if we get rain through stem extension to encourage the disease,” she says.

Only those very late-emerging crops on heavy land will see just one fungicide spray, likely to be applied between the T1 and T2 timings.

David Stead, regional agronomist with advisory group Hutchinsons, is picking up low levels of mildew in very susceptible varieties, such as the old-timer Golden Promise, and on manganese-deficient soils.

“Disease pressure is as low as I have seen for quite a few years,” he says, adding that there is little sign of rhynchosporium, net blotch, mildew or rusts.

However, his fungicide strategy will be aimed at protecting crops going forward and his T1s are likely to be a mix of the SDHI fluxapyroxad and the azole prothioconaxole, with folpet added for ramularia activity.

His T2 approach will be very similar, with a strobilurin possibly added to improve rust control and give a “greening effect”, while he could switch to another SDHI, such as benzovindiflupyr.

He is concerned about ramularia, and on crops with high yield potential and high disease risk due to wet weather, he may try out the new azole mefentrifluconazole.