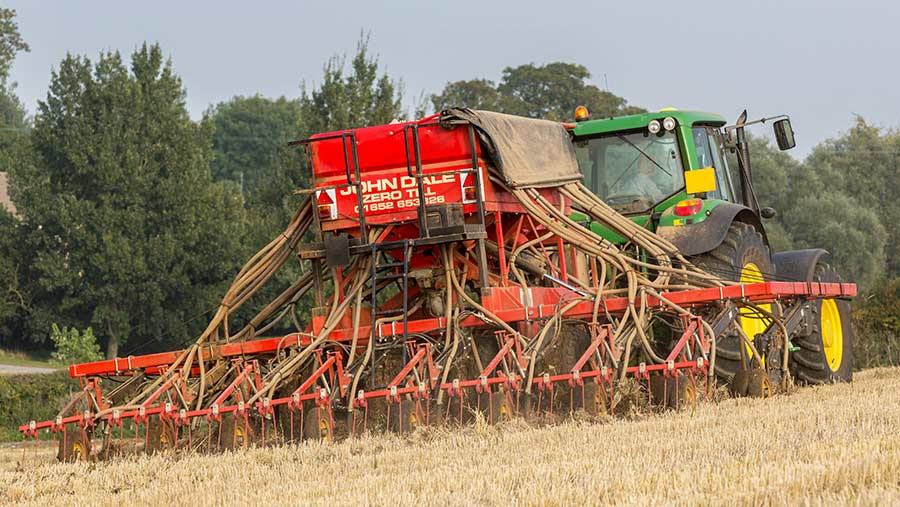 Different management strategies will have to be considered if the barley yellow dwarf virus (BYDV) threat is going to be contained this autumn, agronomists say.

Following the loss of neonicotinoid chemistry, the Deter-based (clothianidin) range of seed treatments is no longer available for autumn-sown cereal crops, putting greater emphasis on other techniques for minimising the transfer of the virus by aphids.

For growers, this means understanding more about the BYDV threat, the spread of the virus by aphids and its effect on crops, so that cultural control methods can be combined with appropriate insecticide use.

In addition, any resistance threats to chemistry will have to be managed, as only pyrethroids are available for aphid control in the autumn and winter period.

All cereals and grasses are affected by BYDV, reports Agrii regional technical adviser Will Foss, with the virus having the biggest impact on barley, followed by oats and then wheat.

The initial symptoms show up in individual plants scattered throughout the crop, with bright yellow upper leaves becoming visible. As it spreads, larger areas of yellowing, stunted plants develop.

The exception to this pattern is oats, which tend to develop reddish-purple foliage once infected.

“With BYDV the earlier the infection, the more significant the impact,” he says. “In that situation, yield losses can be up to 2.5t/ha.”

Maize, which doesn’t get the virus, is a silent carrier and can be a source of both aphids and virus – something that many are unaware of. As a result, the continued rise of maize for anaerobic digestion is expected to have an impact on BYDV levels. 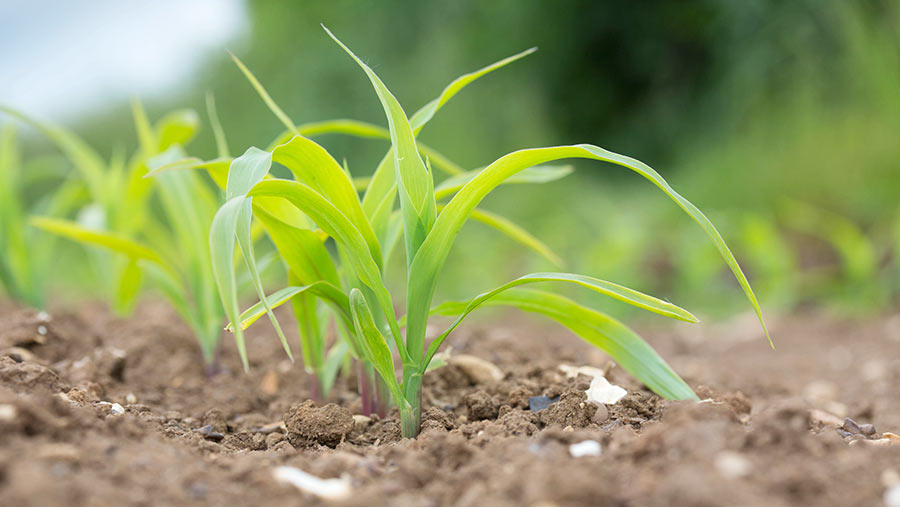 Milder autumns and winters are also increasing the threat, as they allow virus-carrying aphids to remain active for longer.

In the same way, more on-farm grass reservoirs provide refuge and habitat for aphids, as the pest often arrives into crops from grasses.

“There’s also been widespread adoption of no-till and cover crops – which has involved putting the green bridge back in.”

In combination, these factors create higher risk levels as they all favour the aphids, he believes.

The effects of BYDV can be escalated by other stress factors, such as soil pH, adverse weather conditions and nutritional deficiencies, he adds.

“Good agronomic practice can help. We are seeing BYDV symptoms in this year’s treated crops, if the seed treatments have run out of steam, so we know that there’s a threat going into this autumn.”

There are two main aphid vectors of BYDV – the grain aphid and the bird cherry oat aphid – and growers should assume that they have both.

There has been knockdown resistance (kdr) to the pyrethroids confirmed in the grain aphid, reports Mr Foss, but it is a low resistance factor and, providing full rates of pyrethroids are applied, they will control the aphid.

In contrast, no resistance has been found in the bird cherry oat aphid to date, he adds.

“The important thing is to know if these aphids are flying and what type they are. This information can be found from the Rothamsted Insect Survey, which issues weekly bulletins at key times, as well as from your agronomist.”

Knowing whether the aphids are carrying the virus is more difficult, he accepts. 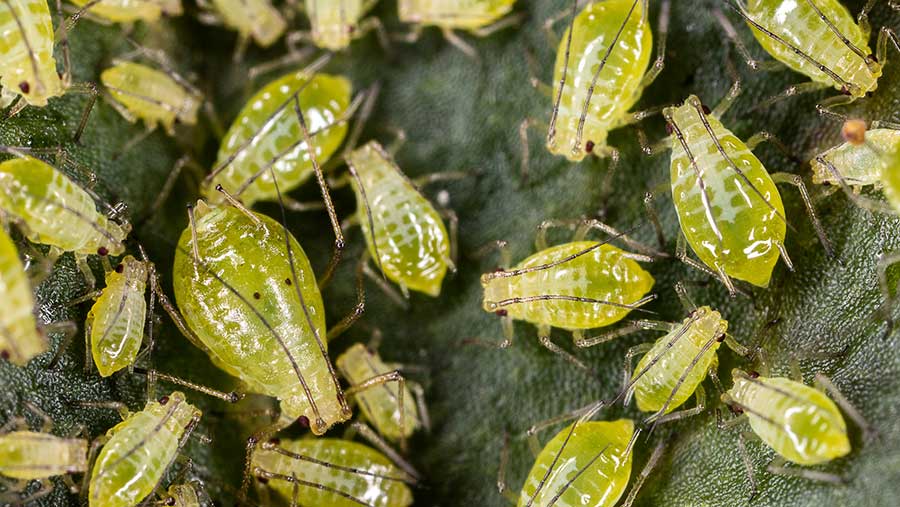 “Currently, the industry uses the guideline that 10% of the aphid population does have the BYDV virus. Once they have it, they are a carrier for life.”

Without seed treatments, that virus level in the aphid population is expected to increase, he warns.

Aphids arrive on the wing from nearby grasses and will feed and infect the plant if they are carrying the virus.

The main damage, however, is done by their progeny, which spread and feed, transmitting the virus more widely.

The timing of this second generation can be estimated by using TSum170 – which is based on the accumulation of daily average air temperatures above 4C.

It takes 170 day degrees for the next generation to be produced, so it’s a useful part of a BYDV management strategy.

“The aphid’s life cycle is driven by temperature, which is why early drilled crops usually reach the 170 day degrees threshold sooner.”

One aphid can quickly become 6,400 aphids in mild conditions. The virus is not transmitted from mother to offspring, but viruliferous aphids preferentially feed on non-infected plants.

There are a number of actions that growers can take to minimise the risk of BYDV.

There are some timing issues to be aware of with cultural control techniques for BYDV, as well as some interesting observations from cultivations work, says Mr Foss.

“As most aphids arrive in a crop by direct transfer from another one, destruction of the green bridge can play an important role in preventing and reducing aphid survival,” he notes.

He recommends that growers leave five weeks between destruction and planting of the following crop.

“Aphids die or move off glyphosate-treated plants once they lose their green colour, so the rate and glyphosate product used can also make a difference.”

Any aphids living on green bridge which is then buried can survive for a while, which is why infection can take place through the soil.

“The roots of the new crop grow down while aphids are still feeding,” he reports.

In terms of cultivations, min-till has less effect on aphid predators such as ground beetles and spiders, while direct drilling into stubble can disrupt the visual clues used by aphids such as leaf colour.

Sowing a week later can reduce BYDV infection by as much as 50%. “The exception to this if it’s very warm, as the aphids will still be very active.”

The work investigated the need for spraying where seed treatments weren’t used, as well as the effect of missing crucial spray timings.

“These results show that a change in mindset is going to be required,” reports Mr Foss. “Many farm sprayers will already be busy at that time.”

Subsequent sprays were applied later in October and in mid-November.

“Spraying twice proved to be the best approach, as it targeted both sets of aphid arrivals. That won’t necessarily be the case in every year, which is why vigilance and monitoring will be so important.”

Agrii is just one of the companies that has developed an app which can help growers with their BYDV decisions.

Based on the TSum170 model, it operates at two levels – providing a pre-season risk for drilling date planning as well as an in-season risk for timing, monitoring and management.

The app produces a heat map for the UK, showing the TSum170 progression for the country and allowing specific locations to be interrogated.

It then calculates the in-season risk, displaying it on a graph. The crop’s drilling date is entered, so that the TSum170 builds from when it first emerges.

“A warning is issued when it reaches 120 day degrees,” explains Agrii’s Will Foss. “That prompts us to go out and look at whether the adult aphids have arrived and to use trap data.”

AHDB’s BYDV management tool operates in a similar way, targeting the second generation of aphids by recording daily temperatures and having a map of weather stations. 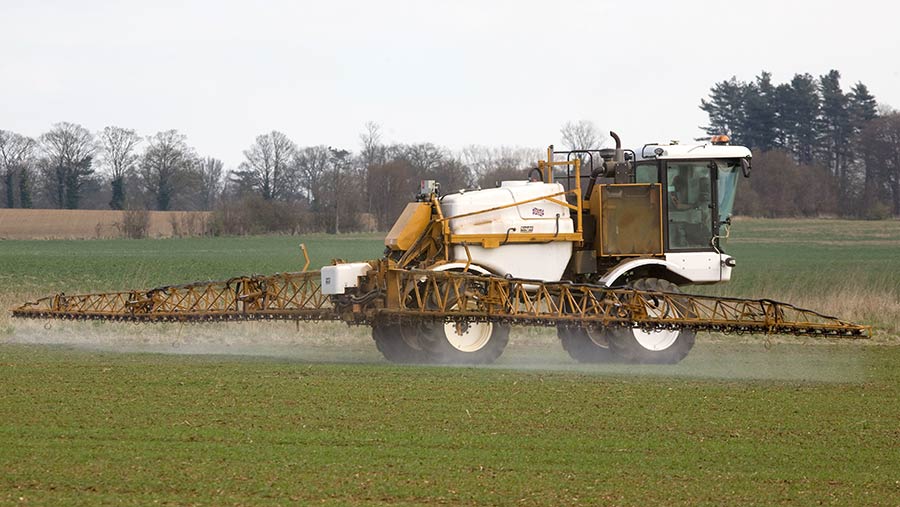 Growers select their nearest weather station and a start date (crop emergence), so that the tool can highlight when 170 day degrees has been reached.

Hutchinsons is also working on a prediction and spray justification system for BYDV, so that insecticides are used only when they are required.

Still in development, the system is using the proven 170 day degree model for predicting an influx of aphids, but is then adding it to higher-resolution weather data.

This will make it accurate at the individual farm and field level, rather than at the local weather station level.

“It will also be linked to Omnia, so that the variety and drilling date are taken into consideration,” explains David Howard of Hutchinsons.

“The plan is to be able to predict the requirement for each field, so that any high risk areas can be prioritised.”

Work done with winter barley shows the value of using a BYDV-tolerant variety, with Limagrain’s Rafaela performing well in the presence of the virus in Agrii’s inoculated trials.

Although the variety did display some symptoms, it had only 1% infection levels, compared with 7.5% infection on non-tolerant types.

“Rafaela was right up there in terms of yield,” comments Will Foss.

“It was also interesting to note that it had the lowest blackgrass numbers – varieties which allow the virus to have an impact tend to allow the blackgrass to come through.”