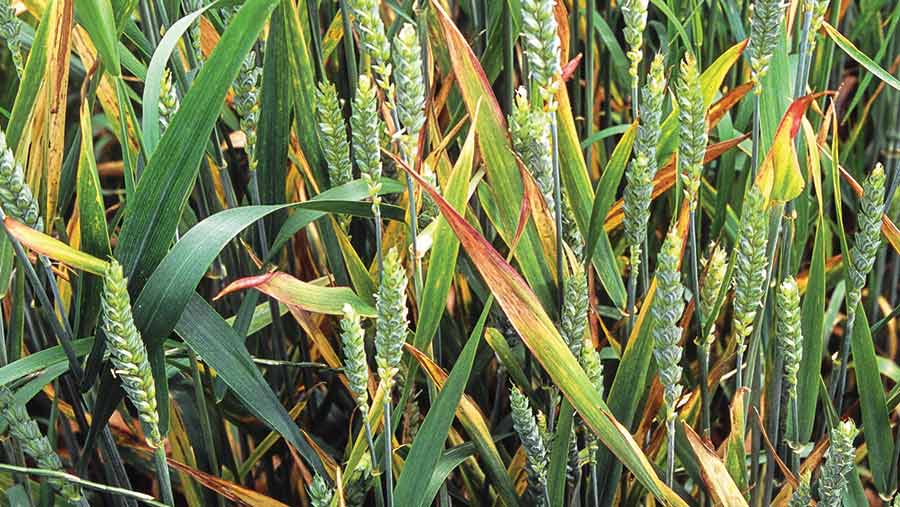 The loss of neonicotinoid seed treatments means that cereal growers will be up against it when it comes to barley yellow dwarf virus (BYDV) control in the future, according to one expert.

The EU has moved to ban three key neonic insecticides for use as seed treatments for all crops outside glasshouses by the end of this year.

These three insecticide actives – imidacloprid, clothianidin and thiamethoxam – have already been banned for use in flowering crops such as oilseed rape since 2013, but now the ban is being extended to key crops like winter cereals and sugar beet.

For wheat growers, there is one last season as the actives will be available until 19 December.

However, the concern is that BYDV could proliferate after the use-up period has expired, according to Dr Steve Foster, entomologist at Rothamsted Research.

“Seed treatments have done a good job at protecting crops against insects,” he says.

“They have given up to six weeks protection at a time when the crop was most vulnerable, helping to limit the spread of the disease and allowing growers to manage their autumn workloads.”

There are three aphid species that are responsible for the transmission of the virus in both wheat and barley in the autumn, he says.

“We can screen them for virus levels, so we know that around 10% are currently carrying the virus, which is low.

“However, it’s not clear what will happen to those levels in the future. Using the oilseed rape example, we do know that the amount of turnip yellows virus has gone up to 80% in the peach potato aphid population.”

Without alternatives, there is every reason to believe that virus levels in aphids will rise over the next five years, just as they have in aphids of brassica crops, he warns.

The grain, bird cherry-oat and rose-grain aphid species can all transmit BYDV – so there’s a need to control all three, especially where aphids are still flying into cereal crops in mild autumn and winter conditions.

“After the winter of 2018, growers will only have pyrethroids to fall back on,” says Dr Foster.

“There is already target-site resistance to pyrethroids in the grain aphid, so it’s really important to keep rates up. We are right on the edge of resistance becoming a major issue.”

Monitoring is crucial for two reasons, he continues. “We need to know about pest numbers, so that we only spray when thresholds are breached, and we need to keep a track of the spread of resistance.”

The other consideration for growers is that pyrethroids aren’t great news for beneficial insects, so their use should be considered carefully.

“There are some new insecticides on the way, but they won’t be here soon. For now, we are very limited in our choices.”

Drilling later is one option, as it avoids the crop being exposed when most of the aphids are flying, stresses agronomist Jock Willmott of Strutt and Parker.

“It’s fine to do that with winter wheat, but there will still be a problem in winter barley,” he reports. “Barley crops need to be in the ground by the end of September.”

Temperature will also have a bearing, as aphids will continue to move into crops if it is mild, even into December.

“They can’t survive at very low temperatures below freezing, but the crop does give them some insulation and protection from the cold.”

Five ways to protect against BYDV

Delayed drilling will minimise BYDV infection in most years. Success will come down to seasonal conditions, as aphid flight, population development and movement within the crop is dependent on temperature.

Use alert services to understand the number of aphids flying in the autumn and keep a record of temperatures.

The only option where aphids are at or above threshold, pyrethroid insecticides are already affected by resistance in some aphid species. Use the full recommended rate and only spray where necessary.

Green plant material left between crops can act as a ‘green bridge’ and help aphids colonise new crops. Cultivations can be used to bury these materials and create a clean start, although they may also have an effect on populations of beneficial insects.

In the future, there are likely to be BYDV-tolerant varieties of barley, with plant breeders working hard to bring them to the market.

The grain aphid and bird cherry–oat aphid are the main vectors of BYDV, which is most damaging when young plants are infected in autumn.