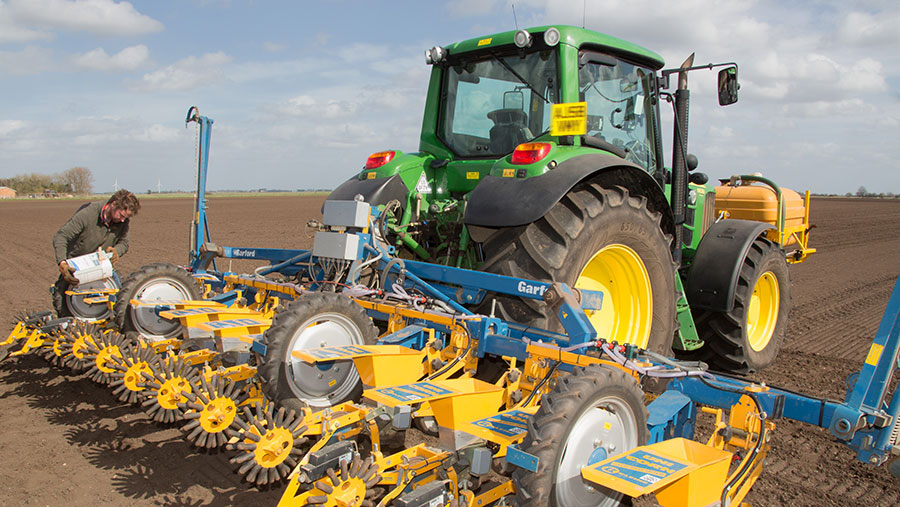 The recent spell of warm, dry weather has allowed many growers to get into full the swing of spring drilling and take on the first fungicide application timing in winter wheat

With crops going into good ground conditions and temperatures across much of England and Wales climbing to more than 20C, the race is on to get plants drilled before the weather takes a turn for the worse.

By the end of the week, the weather is expected to become significantly cooler and unsettled, with a chance of wintry conditions.

We take a look at the tweets from farmers and operators in full flow on the farm, and take a closer look at how wheat growers are coping with the loss of the actives epoxiconazole and chlorothalonil, which were the mainstay for last year’s T0 regimes.

Spring drilling is all go

A beautiful sunrise whilst the team are coming to the end of drilling LG diablo spring barley. ☀️ Expected to have it all drilled by the weekend, ready for harvesting in the summer. 🌾 pic.twitter.com/RVzgawSshh

For 21-year-old Harry Waudby, who works on the family farm in Stow, Lincolnshire, the last of the spring drilling is now complete.

Nice day to finish the last of the spring drilling ☀ ☀ pic.twitter.com/0dvRc0z3qd

Meanwhile, in the south-east of England, farmer Rob Hodgkins is cracking on with drilling, hoping to get everything in the ground before the cold weather hits next week.

Tearing through spring drilling here cold and wet next week so everyone pushing on. Hope to have it all buttoned up by the end of the week . pic.twitter.com/q8pSSMesEH

In north Norfolk, the Sentry farminng team have been using their new Tempo precision drill to plant Cantona sugar beet last week. Let’s hope virus yellows won’t be too much of an issue this year.

Tom Hawthorne shares this great video of the first T0 spray being applied to a crop of Gleam winter wheat at Flawborough Farms in Nottinghamshire.

First field of ‘T0’ going on a nice crop of @SyngentaCropsUK Gleam. @HORSCHUK PT is a bit of kit… pic.twitter.com/8eugC0BRTy

Andrew Robinson, farm manager at Heathcote Farms and 2019 Farmers Weekly Farm Manager of the Year, is out in the beautiful Bedfordshire sunshine carrying out a T0 application on Siskin wheat.

Bit of T0 action on some @KWSUKLtd Siskin today under some beautiful Bedfordshire skies. pic.twitter.com/sJ7msMipLd

In Essex, wheat crops are looking well and there is even some dust flying at Edward Ford’s farm, where he is out and about spraying.

Fifth-generation arable farmer and contractor, Angus, who farms at the Warwickshire Farming Partnership, Dunchurch, is enjoying his evening making the first T0 spray to a crop of Extase wheat.