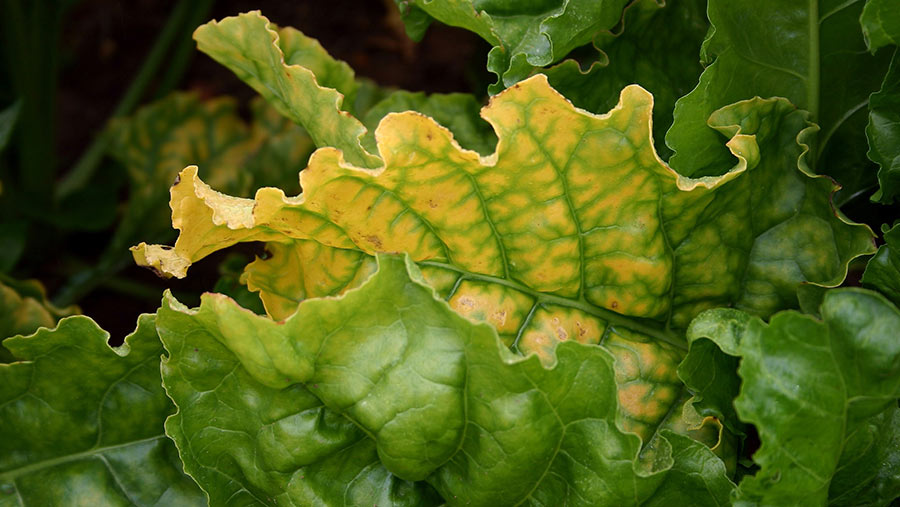 High levels of virus yellows are starting to show in sugar beet crops following what one sugar beet expert calls “unprecedented levels of aphids” during spring.

Aphids were migrating from the third week of March, following a mild winter with very few frosts, says Mark Stevens, the head of science at the British Beet Research organisation.

“Populations rapidly built, so we were seeing really high levels of aphids through the end of April, May and into early June to levels I don’t think I’ve seen before in my 32 years in the business.

“Unfortunately, some crops were only at cotyledon to 1 true leaf, or at multiple growth stages when aphids came in, so we’ve had infections since April. And what we’ve seen since mid-June is the manifestation of those infections, and it is likely to get worse.

Yield losses from yellowing viruses, which is primarily transmitted by the peach-potato aphid (Myzus persicae), can be up to 50% for beet yellows virus (BYV), and 30% for beet mild yellows virus (BMYV), depending on when infection takes place.

Research is ongoing to find alternative control methods after approval was removed for neonicotinoid seed treatments ahead of the 2019 season, which had provided effective control since the early 1990s.

Four key areas are being investigated: varietal tolerance or resistance, using beneficial insects as biological control, the use of foliar insecticides, including some novel options, and different agronomic practices.

Progress is being made in finding partially resistant or tolerant varieties, although trying to identify the appropriate resistance genes to stop three different viruses is difficult, Prof Stevens says.

“A couple of the breeding companies are getting quite close to market, so we could see new entries in the next couple of years, but like any new variety with a new trait, there is likely to be a trade-off against yield in the absence of disease.”

The BBRO “Goliath” project, which this year is investigating 14 varieties – 10 development lines from breeders plus four control varieties from the Recommended List – found significant differences in symptoms and tolerance to both BYV and BMYV last year.

“Brassicas are particularly favourable for building up Myzus populations, and while they do not host the yellowing viruses, other species in the mix and weeds do, and aphids can then move on to these and into spring crops to transmit the virus. So just bear that in mind when weighing up the advantages and disadvantages.”

Research is also being undertaken for insecticidal solutions, he says. “As well as classical aphicides, in the lab we also look at wide range of potential products for efficacy in detailed aphid studies.

“They may have value but we also need to look at application technology to see how we can exploit them. We’re also looking at whether we can trigger mature plant resistance earlier.”

He hopes up to five insecticide applications, from three different modes of action, and three products will be available next season through various emergency use approvals.

“We’re trying to gain some different modes of action that we have seen in 2020 trials, in difficult situations, have given up to 80-90% control.”

Covering sugar beet with a biodegradable plastic film, similar to that used in maize, is showing encouraging results in BBRO preliminary investigations as a potential agronomic solution to reducing virus transmission.

Plastic film potentially protects sugar beet crops in three ways, explains Stephen Aldis, BBRO’s crop production and mechanisation specialist. “First, the colour and finish of the film doesn’t attract aphids into the field as they don’t recognise there is a plant underneath.

“The film also provides a physical barrier to aphids, although it is perforated as you need some ventilations, and also boosts crop growth, so when the film is removed, the plant is more advanced and benefits from adult plant resistance.” 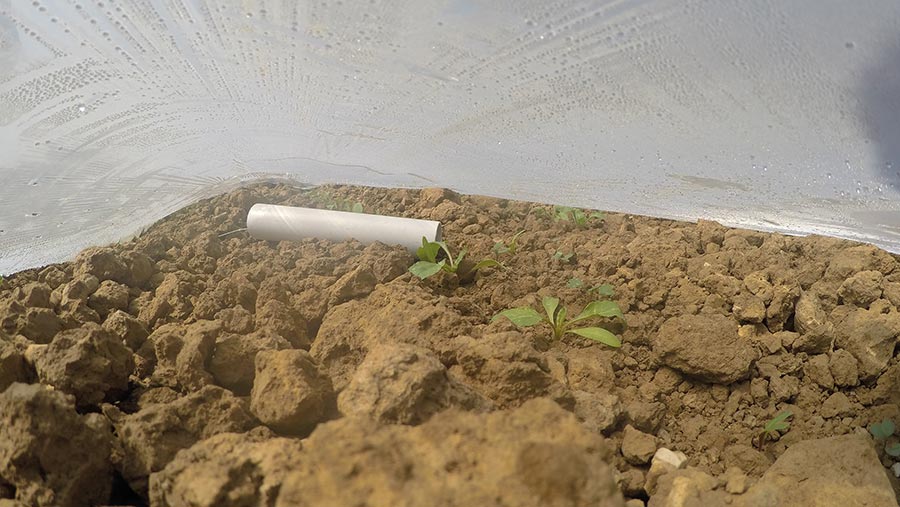 In the trials so far, plants are both physically larger for the equivalent growth stage not under plastic, and quicker to develop by 1-2 growth stages, thanks to the heating effect and better moisture retention under the film, he says. “It’s good to see we can influence the crop in the way we hoped.”

Virus assessments are still to be made, although in mid-July, the plots were mostly free of virus in a high-pressure year. “It’s looking encouraging.”

The film is applied after drilling, although in maize, the supplier Samco offers a one-pass drill and apply solution in maize, with it lasting up to six weeks before it begins to degrade. “We think the optimum time is about four weeks before the crop starts to push up against the plastic and it becomes a negative.”

That potentially means one of the challenges that will need to be overcome is whether the film will need to be physically removed from the crop, which would add extra cost and labour.

“In maize, the crop just pushes through the plastic and degrades over the season, but sugar beet’s flat and broad canopy doesn’t puncture, so we’re looking at degradation rates or its perforation so the beet can come through.”

Weed control is also a potential challenge, with pre-emergence herbicides applied at the same time as the film. “The Conviso system is an option to take out weeds slightly later, once the film is removed.”

Film application costs about £320/ha all-in, he says. “We think it is viable and has a really good chance of justifying itself from the yield lifts we’ve seen in an initial look-see.

“But it is the virus control potential that drew us towards it, with the cost savings from not using insecticides and mitigating of yield loss from virus that is really interesting.”