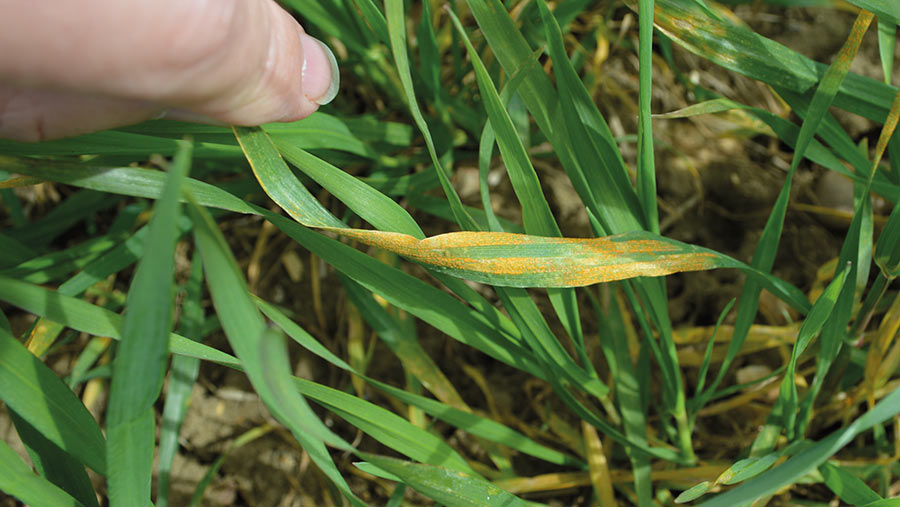 Wheat growers are urged to monitor crops through the winter as flecks of yellow rust disease are being seen, and then be prepared for an early spring fungicide spray on more susceptible varieties.

Early signs of the foliar disease are being seen in Yorkshire and Lincolnshire, although autumn spraying is generally not recommended as any yield benefit is unclear and cold weather will give some control.

Christine Lilly, research and technical support manager at agronomy group Frontier, says the disease is widespread and quite active in the area this autumn, so growers need to keep an eye on it.

“We are advising growers to go and have a look at their crops as some may need an early fungicide spray in February,” she tells Farmers Weekly.

Results from the group’s trial site at Haywold on the Yorkshire Wolds, showed that the wheat varieties that gave a highest response to fungicide treatment in 2020 would be ones to monitor closely for yellow rust this season.

The AHDB gives disease-resistance scores on a 1-9 scale, with 1 being the most susceptible and 9 the most resistant. The trial varieties showing the biggest response to fungicides (with yellow rust scores) include Kerrin (7), Kinetic (6), Gleam (7), Shabras (7), Skyfall (5), Wolverine and Zyatt (7). Wolverine is not on the AHDB Recommended List so has no official resistance score.

“These should be varieties that are monitored closely for the onset of yellow rust, and may require treatment in early spring,” she adds.

Typically, this early treatment would be with an azole fungicide with a quick knockdown effect, such as tebuconazole and epoxiconazole. She adds growers should check product labels for the earliest application timings and notes that 2021 will be last season for epoxiconazole use before it is banned.

These wheat varieties may need a pre-T0 spray in February, earlier than usual, and follow-up fungicides would need to be prompt as long gaps between sprays allowed fresh rust infection to develop, she advises.

However, those wheat varieties which were much less responsive to fungicides and show better resistance scores to yellow rust, will give growers more flexibility in fungicide spray timings.

These include Colosseum (not on the Recommended List), Costello (9), Extase (9), Graham (8) and Saki (9) although Mrs Lilly adds that these varieties still require a decent fungicide programme to get the optimum returns.

However, this autumn yellow rust has been seen on a range of varieties in northern England, including Graham (8), Skyfall (5) and Zyatt (7), so growers should not rely totally on disease resistance scores.

The trial was conducted on a very fertile, high-yielding site with a long growing season, and yellow rust was present from February through to July 2020, with higher levels than previously seen at the site.

The disease presence across the site was likely to be heightened by weather conditions, with no long frosty periods in the winter months to suppress yellow rust, and also the increased number of more susceptible wheat varieties.

Mrs Lilly says infection on the wheat leaves would ordinarily be seen, but the disease was seen on the ears of some varieties, even when a robust fungicide programme had been applied.

She concludes that yellow rust control will become more challenging in future seasons and highlights the value of a comprehensive fungicide regime for supporting yields in many of the key wheat varieties.