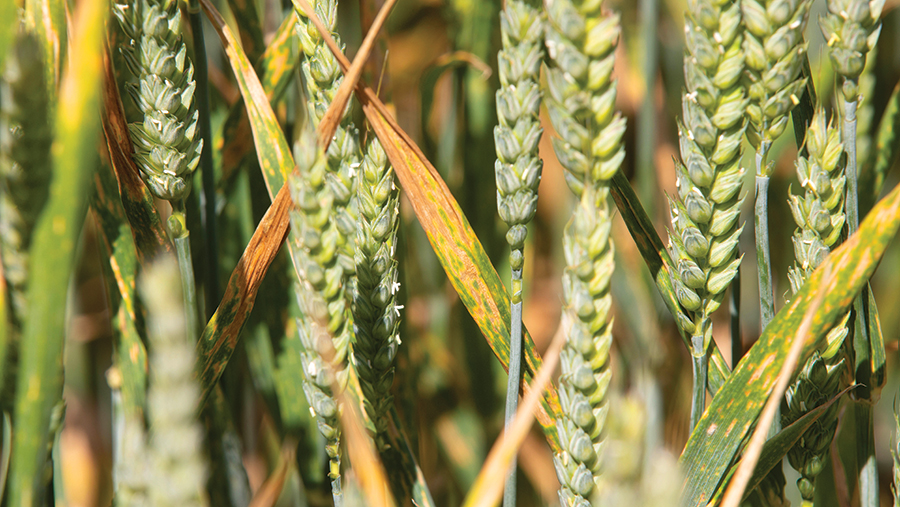 Yellow rust is set to be as important a disease threat to winter wheat as septoria this spring, especially on late-drilled crops as higher temperatures encourage plants towards the T1 fungicide spray timing.

More yellow rust is being seen in wheat crops this season than usual, whereas septoria is generally at lower levels in backward crops which were drilled late and suffered from a wet winter.

Jonathan Blake, disease expert at crop consultants Adas, says yellow rust is more prevalent this season due to new races of the disease, a wide range of varietal resistances and a lot of late-drilled wheat crops. 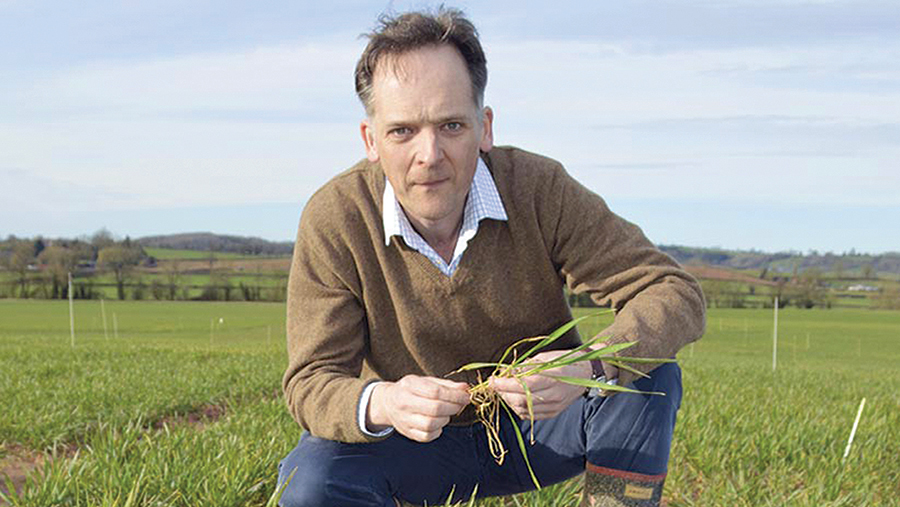 Younger wheat plants from the late sowings are more susceptible to yellow rust, which has increased in the cool and damp early spring weather.

“It would be advisable to make sure you have a rust active element in your T1 spray, as we are seeing more yellow rust around this season,” he says.

Azole fungicides such as tebuconazole and epoxiconazole have good “knock down” rust properties, and strobilurins also give good activity, while other azoles and SDHI fungicides offer control.

Growers of the popular wheat variety Skyfall, which can be drilled later into the winter, need to be especially aware as thin crops will be susceptible and this variety has only moderate disease resistance.

Skyfall has a yellow rust rating of 5 in a 1-9 scale where 1 is susceptible and 9 show good resistance compared with other popular varieties on maximum 9s like Siskin, Crispin and Costello.

For early-sown wheat crops then septoria, as usual, will be the bigger disease threat, but on later sowings rust becomes a more of an issue, Mr Blake says.

Yellow rust is a disease that need to be controlled when seen, so some wheat growers will have already used a rust active fungicide at T0, or even earlier if the disease was present, along with a multisite protective fungicide like chlorothalonil for septoria.

Looking towards T1, when leaf three is fully emerged, Mr Blake says there is likely to be wide range of T1 timings this season due the range of sowing dates from 20 April onwards for early-sown crops to the middle of May for late-sown ones.

For late-sown crops of varieties with good general disease resistance, such as Graham and Extase, there will be a less compelling case to use an SDHI fungicide at T1 so savings can be made, and valuable SDHIs saved for the T2 flag-leaf spray.

“I don’t see this as being a two SDHI season for later sown crops of newer varieties with good disease resistance,” says Mr Blake.

David Lines, agronomist and member of the Association of Independent Crop Consultants (AICC), advising growers in the wetter west of the country in Herefordshire, was expecting to see more wet-loving septoria this spring and says it is likely to be a “rusty” year.

“However, thin backward winter wheat crops still get septoria, so it is a very important disease for us,” he says.

For early-drilled wheat crops with good yield potential, he is looking to go down the SDHI/azole/chorothalonil approach at the T1 timing to give crops good disease protection.

But for backward crops, the decision to omit an SDHI may come down to cost, as some of the older SDHI-azole mixes are very competitively priced compared with leading straight azoles.

Further north in Yorkshire, fellow AICC member Patrick Stephenson is seeing a lot of yellow rust across the Yorkshire Wolds and along the coast, and his T0 sprays have been driven by rust, with the azole tebuconazole his preferred product.

For late-drilled backward wheat crops, there will be more flexibility not to use an SDHI, and on these poorer crops he may look to use the azole epoxiconazole plus a strobilurin and chlorothalonil at T1.

“With fewer plants and, therefore, more space around them, the risk of septoria is less,” he says.

Like Mr Lines, he says for early-sown wheat crops in September with a good yield potential he is likely to advise a usual four-spray programme with an SDHI/azole/multisite at T1.

Along the English southern coast in Lincolnshire, AICC chairman Sean Sparling has taken a strobilurin/chlorothalonil approach to controlling yellow rust and protect against septoria at the T0 stage in his area.

He favours a strobilurin rather than an azole at T0 as it dries out the rust quickly, has a physiological greening effect and can be applied at earlier winter wheat growth stages than some azoles.

With lots of septoria around in his area, he says it is a tough call on committing to an SDHI at T1, but he may favour the older SDHI boscalid as it has been perfect weather for eyespot last autumn, and boscalid is a good active against the disease.

“It’s shaping up to be a twice SDHI season with septoria at moderate to higher levels,” he says.

Further south, Peter Cowlrick at CCC Agronomy and another AICC member is seeing signs of yellow rust in his area of Hampshire, Sussex and Kent.

Dry weather is suppressing septoria at the moment, but a wet April could heighten the risk, especially as new wheat leaves are likely to emerge rapidly, every two-to-three weeks in the spring, he says.

“Early-drilled crops in September and the first half of October with better canopies could benefit from an SDHI fungicide at T1,” he adds.