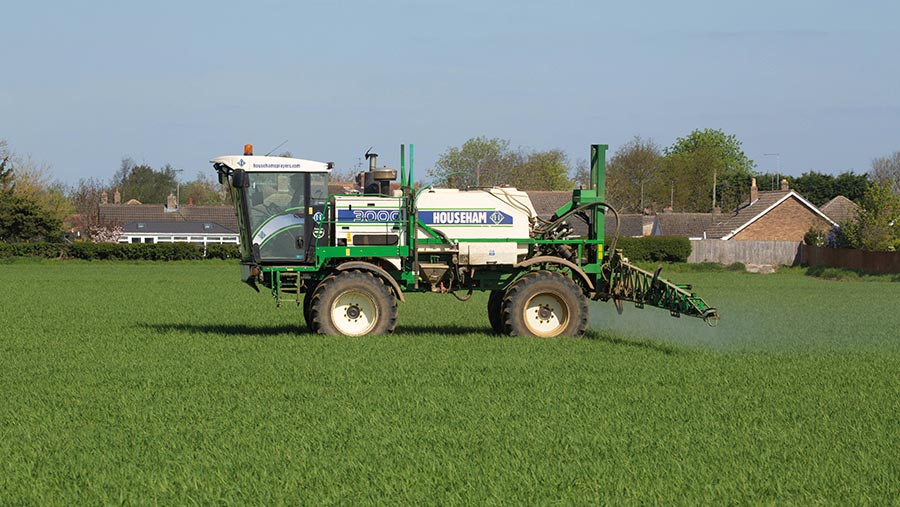 Based on a compound found in seaweed, a biopesticide is delivering similar yield responses and disease control as a key multisite fungicide, when used as part of a septoria disease-control programme.

The compound acts as an elicitor, which triggers the plant’s own defences against the disease, thereby offering farmers another mode of action, explains Clare Bend, Agrii’s head of technical.

Agrii is looking at biological options as part of its Green Horizons initiative, with one objective being to increase activity in trialling potential products.

The reasons farmers are looking to use biological options include:

The company has trialled 145 different products in replicated trials and one of the more promising is Iodus, which is a biofungicide and elicitor.

It is fully registered and based on laminarin, a compound found in seaweed. According to the label, it is for the prevention of septoria and reduction of mildew in winter wheat.

Agrii has carried out its own trials and is now including it in a targeted way in its agronomy programmes, backed up by the data and a good understanding of how the product works.

The biofungicide can be used before the first node is detected (growth stage 30), so it can be used at the T0 timing or earlier, if needed, Mrs Bend explains.

Going early is important, as it works by priming the plant’s defences. She sees this as a component of integrated pest management practices by adopting a “prevent” strategy.

Another valuable property is that it can be used with other products, which is important because the T0 spray can also be used to clean up weeds and foliar nutrition.

A healthy plant has strong cell walls that do not allow viruses and bacteria to penetrate. But if it becomes compromised or damaged, the diseased cell releases degradation products and these become elicitors.

They are recognised by neighbouring cells, which activate their defences. However, this can take up to 48 hours, so the disease can overwhelm the plant.

Laminarin is similar to the degradation products and acts as an elicitor, triggering the plant’s own defences.

Mrs Bend describes it as “a natural product that makes crops a little bit tougher”.

While the label rate is 1 litre/ha, she points to dose response trials carried out by Scotland’s Rural College which show 0.75 litres/ha is appropriate.

Looking at the percentage control of septoria on leaf 4, Iodus is similar to the multisite fungicide folpet

Mrs Bend sees it as an alternative to folpet, as it is a protectant and also helps with resistance management by offering a different mode of action to the azoles and SDHIs.

In terms of yield benefits, data from 27 trials carried out by Agrii and other independent trial organisations in 2019 and 2020, show an average response of 0.3t/ha (see graph below).

This is similar to the 0.35t/ha average seen in 10 years of Agrii’s T0 fungicide response data in septoria situations.

“We saw a positive response in 70% of trials,” Mrs Bend says. However, she warns growers need to watch out for yellow rust, as the jury is still out on its effectiveness for this disease. A partner product is needed, such as an azole or strobilurin.

She sees Iodus as a good fit in situations where farmers want to explore biosolutions to help reduce septoria pressure. As this is the first season of use in lower-pressure areas such as eastern England, ensure appropriate yellow rust cover is also included. Or use in higher-pressure regions (west and north), but where the variety has good resistance to septoria or is drilled later.

Objectives of the T0 spray from a fungicide point of view depends on the variety, drill date, place in the rotation and whether the crop has established well or is a bit thin.

“Every two-week delay in drilling beyond mid-October equates to a 0.5 increase in the variety’s septoria-resistance score.”

In later-drilled wheats that may have thinner canopies, the lower leaves are a greater contributor to overall yield. So retaining green leaf area lower down the canopy is more important. Considering the higher risk of yellow rust, that is where the focus should be.

Mildew can also affect rooting. “We want to retain root mass, as this will sustain tillers and maximise tiller survival to increase yield.”

For forward, early-drilled crops, particularly after the wet winter, farmers will be seeing plenty of septoria inoculum and the focus will be on that. However, do not disregard yellow rust, as most varieties are susceptible in the young plant stage.

Looking at trial data since 2011, it is hard to discern a link between T0 responses and drill date.

There was a bigger benefit (average of 0.6t/ha) for yellow rust control than with septoria (0.35t/ha). However, Mrs Bend highlights that there was still a solid return on investment for septoria.

The T0 is valuable, as it buys time for the T1. If the T1 is delayed because of the weather it can affect yield, as leaf three contributes to overall yield. A T0 can help lessen this effect.