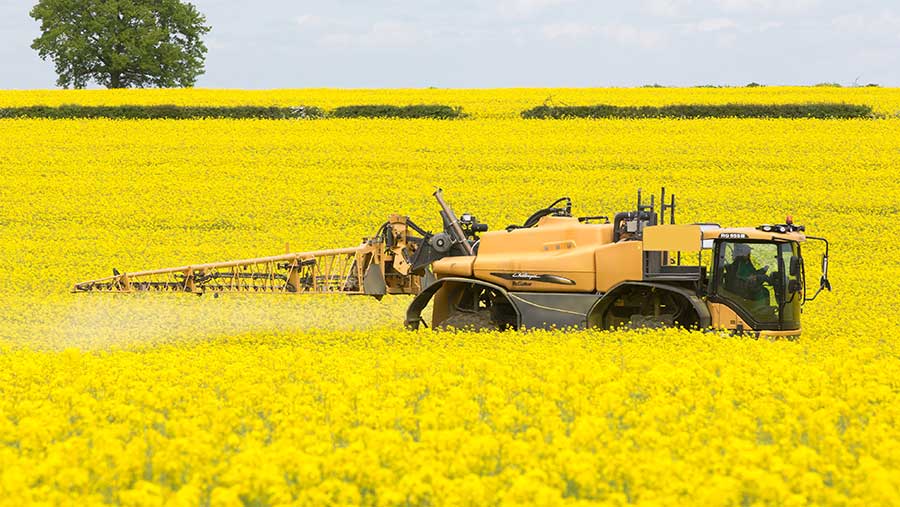 Applying fungicides at the right time is critical for effective sclerotinia control, and that’s why growers need to keep an eye on disease alerts as their crops approach flowering.

Weekly updates are planned to start in early April and versions will be issued by AHDB and BASF, giving growers an indication of the infection risk in their region.

Forecasting has become an important part of spray decisions because the fungicides available for sclerotinia are all preventative rather than curative, so have to be applied ahead of any infection if they are to provide protection against the disease.

With three weeks’ activity on offer from a single, well-timed spray, getting the application timing right is far more important than fungicide product choice, experts agree.

In most years, that timing is just before mid-flower on the main raceme, ahead of significant petal fall.

Caroline Young, plant pathologist at ADAS, explains that there are three main factors needed for the disease to get a hold: the presence of inoculum, flowering crops and conducive weather conditions.

She adds that the amount of petal fall is also used in the forecast, as that is how infection occurs.

“Once the airborne spores have been produced and landed on petals, they are capable of surviving there for quite a while,” she says.

“As the petals start to fall, they can stick to the plant, which is when infection takes place.”

Moisture helps the spore-laden petals to attach themselves to the plant, so unsettled weather increases the risk. A minimum temperature of 7C and relative humidity of 80% or above for more than 23 hours is required for infection to occur.

“Remember that inside the crop canopy it can be more humid and is often damp,” Ms Young says.

“Mild temperatures and light rain at flowering are the biggest threat, but there is often enough moisture in a crop canopy.”

Her ADAS colleague Julie Smith reports that three years of data from five sites in the AHDB-funded fungicide response work shows that when it comes to control there is no difference between Proline (prothioconazole), Pictor (boscalid+dimoxystrobin) and Filan (boscalid).

“There’s really nothing to pull them apart,” she says. “Amistar (azoxystrobin) is another option for sclerotinia, but it is a bit weaker on the disease.”

“Given this situation, using another azole at flowering may not be the best choice,” she says. “You will be exposing any light leaf spot still in the crop to the chemistry.

“Our advice is to use the azoles where they are most needed, which tends to be earlier in the season. Fortunately there are other choices for sclerotinia.”

Independent agronomist and Association of Independent Crop Consultants member David Lines makes good use of the ADAS sclerotinia forecast, so that any spraying is done according to risk.

Last year oilseed rape crops started to flower early, when it was still very cold, so the sclerotinia risk was initially low, he recalls.

Spraying, when it was needed, didn’t take place until mid-flower and Mr Lines found that one application was enough to take crops all the way through flowering.

“It went bone dry after the first spray and there was very little disease about,” he says. “It emphasised the importance of the weather in the risk of the disease, as well as the role of spray timing.”

If it’s cold and dry, or hot and dry, the threat is reduced, he summarises. “The presence of wet weather, or even just drizzle, along with high humidity at flowering is when we can get problems.”

Most of the oilseed rape he looks after is grown in a long rotation and so tends to be treated once for sclerotinia.

“I am very much guided by the forecast model on the need for a second spray, especially if flowering is prolonged, but it’s unusual to need another one.”