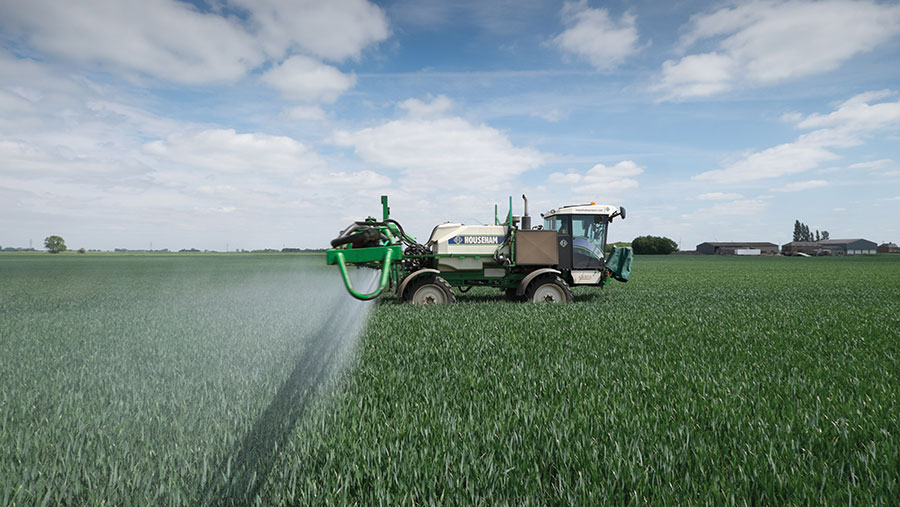 A group of Norfolk farms are testing out alternative disease control products this season in the hope they will facilitate future cuts in their synthetic wheat fungicide inputs.

Over the past 30 years, arable producers in the UK have gotten used to a programmed approach to pesticide use in a range of crops, including winter wheat.

This is particularly the case with fungicides used to protect or cure diseases such as septoria, with a risk-averse approach that applies three, four or even five sprays commonplace.

However, there is a growing feeling among growers that this approach should be consigned to the history books, and the reasons are twofold.

Firstly, growers are still paying a high price for products that have become less effective against diseases such as septoria due to sensitivity shifts in the pathogen’s population.

And secondly, there is increasing awareness of the potential environmental effect of using high pesticide inputs in crop production. With fungicides, this concern relates to soil biology, in particular.

A cluster of Norfolk farm businesses are taking part in trials looking at how two alternative products might be introduced for wheat disease control, helping to reduce synthetic fungicide inputs and limit the effect on the soil environment.

One of the businesses is the Holkham Farming Company, which grows cereals, sugar beet and potatoes across 3,500ha near the north Norfolk coast.

Farm manager James Beamish says the Earl of Leicester, whose family own the estate, has been a keen driver behind the business implementing more sustainable farming practices.

This has seen Holkham part company with its previous agronomist and enter a collaboration with three other large Norfolk farming estates.

Between them they employ a full-time data analyst to scrutinise every measurable element of the three businesses.

On top of the data analyst, Holkham now leans on the guidance of a strategic agronomist for long-term planning, with CMG Agronomy’s independent crop adviser, Craig Green, providing advice on day-to-day decisions such as nutrition and pesticide inputs. 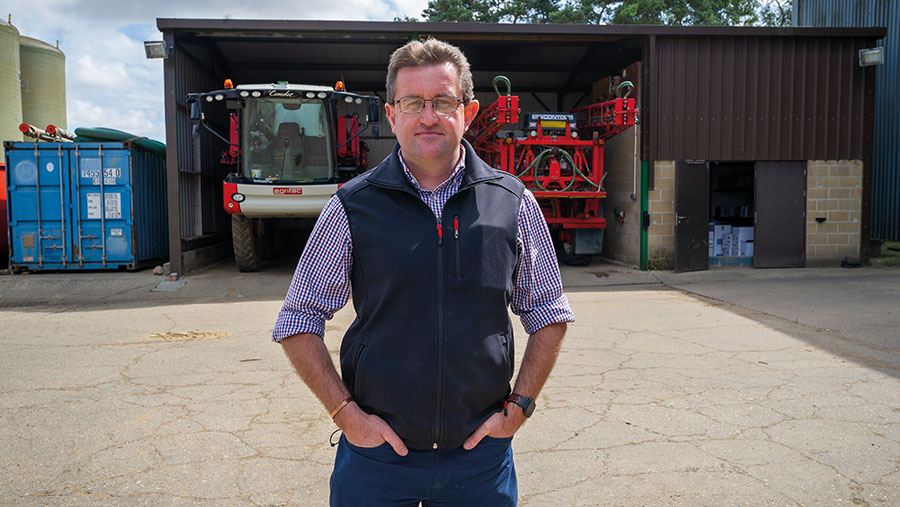 “We recognise that we have to monitor our pesticide use and minimise it by scrutinising every spraying decision we make. We’ve been too wedded to a programmed approach in the past and that needs to be challenged,” says Mr Beamish.

Like on many farms, soil health worries are driving change, and it makes sense to reduce the amount of fungicide going into the soil ecosystem, as very little is understood about its effect on microbiology.

Mr Green says there is little or no information from fungicide manufacturers, but it can be assumed that substances designed to control plant pathogenic fungi may have some negative effects on soil fauna.

This has seen the business seek tools that could help reduce rates or cut sprays out of fungicide programmes altogether, and this season it is taking part in field-scale trials testing two alternative products (see “Disease control trials in north Norfolk”).

Along with Holkham, nearby farmer Jimmy Goodley is running a similar programme on his farm (see “Regenerative farm aims to add to disease control toolkit”).

Snettisham-based Ken Hill Farms – which has an almost zero-fungicide policy – is also testing the products in a whole-field trial. The field has been drilled with a variety mix, and will be compared with an untreated field over the hedge.

Mr Green says following the withdrawal of chlorothalonil as a cost-effective multisite used throughout the programme, the need for viable alternatives is acute.

While some argue folpet is the natural replacement, he thinks its higher cost and lower efficacy relative to chlorothalonil makes it unattractive. It is hoped a combination of Iodus and Thiopron may be more enticing.

“Rather than traditional chemistry, we hope to use Iodus to stimulate the plant’s natural immunity, with sulphur providing some additional protection at T1 and T2,” he explains.

Up to late April, spring 2021 had been very dry and unconducive to diseases such as septoria, so T1 fungicide plans at Holkham were tuned down slightly with the reduced risk.

However, 44mm (and counting) of rain between T1 applications on 29 April and Farmers Weekly’s visit on 7 May, plus continued showers for the rest of the month, mean the programmes will be given a stiff test, as conditions are ideal for septoria spread. 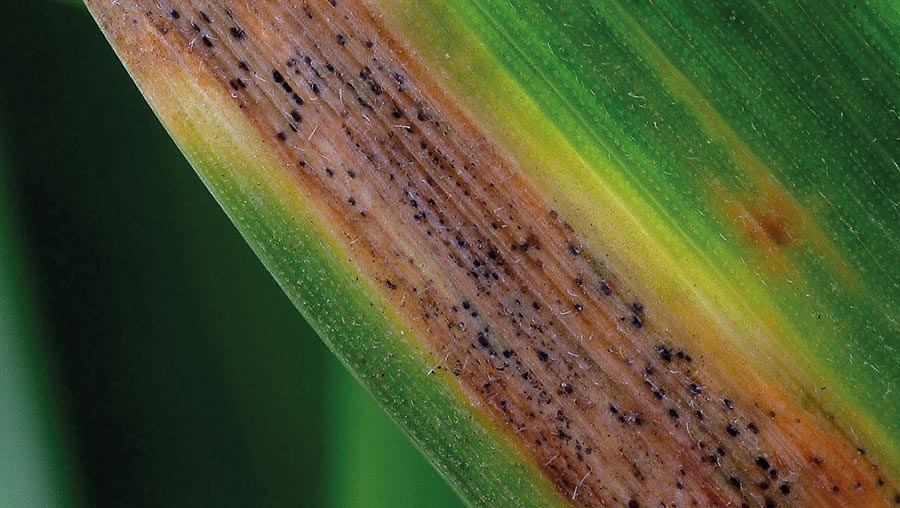 There are two concerns about sulphur use. The first is the persistence and rain fastness, but Thiopron product still coating the leaf was evident on the trial strips, despite the wet period.

In the past, sulphur has also been used at very high rates, like the 9 litres/ha used in the trial, and this could be logistically difficult across the farming company’s 500ha of winter wheat.

A solution may be to use the product at lower rates more often, coating each leaf as it emerges, but this would, again, be difficult across large wheat areas.

“That would require turning the sprayer around every 10 days or so, and with other commitments, it could be difficult.

“It may be possible across smaller wheat acreages or targeting varieties with higher disease within a larger area,” says Mr Green.

Iodus is a product containing laminarin, a substance extracted from brown algae. When applied to winter wheat – before first node detectable – the elicitor stimulates the plant’s natural defences and helps it fight diseases such as septoria.

Thiopron is a new liquid sulphur formulation that shrouds the plant leaf, protecting it against the establishment of disease spores. It can be applied to cereals twice before flowering.

As with any disease-control trial, it is difficult to pass judgement on treatments until the end of the season, but Holkham graduate trainee Sam Bennett has been keeping a close eye on plots throughout the season as part of his Basis project.

At harvest, each plot will also be cut, and the collected grain taken over the estate’s weighbridge at its Egmere grain stores to give an accurate comparison of yields after each programme.

Farmers Weekly will return in September to report on the final results, scrutinising disease control and costs.

Just a stone’s throw away from Holkham, Jimmy Goodley is four years into a transition to regenerative farming across his mid-sized arable unit, and is also involved in the trials.

Following a career outside farming, Mr Goodley returned to the family farm at East Barsham with a fresh perspective on how the business could be run.

He has focused attention on improving soil health by reducing cultivations and introducing cover crops and sheep into the rotation.

The next step is reducing his crops’ reliance on bags and bottles to stay healthy and, although it could be argued that using Iodus and Thiopron is switching one bottle for another, they are both naturally derived materials.

“We are trying to reduce synthetic inputs, decrease costs and maintain margins, but even if you get everything else right, the crop sometimes needs a helping hand,” hesays.

Like Holkham, Mr Goodley is comparing his standard fungicide programme with a mix of conventional and alternative products, plus the two products alone in sequence.

The wheat variety in the trial is Extase, which has high resistance to septoria and rusts and an untreated yield of 93% of controls on the Recommended List, so it will do some of the heavy lifting.

However, the hope is that a positive result with the alternative products will offer enough confidence to reduce fungicide inputs across the wheat area in the near future.

“You can’t view these things in isolation, but rather as part of a solution, and you’d be mad not to explore what they can offer,” he adds.