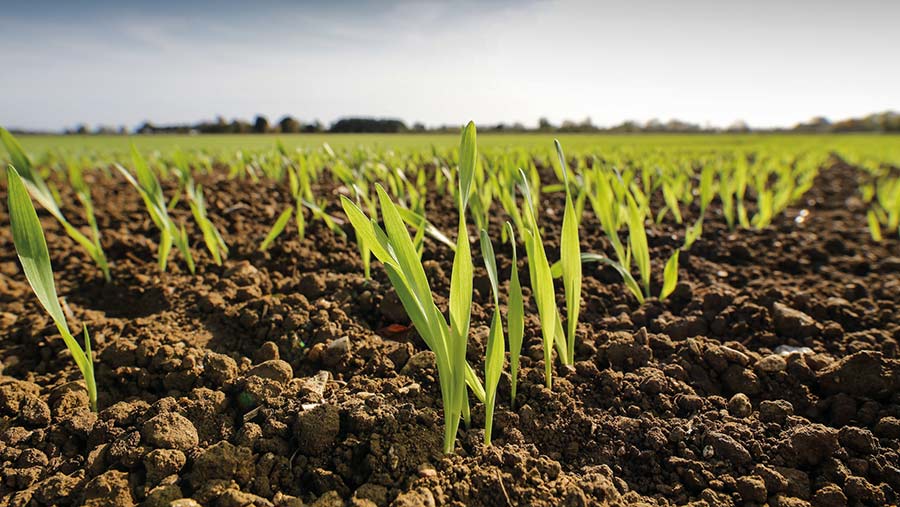 Barley growers should be aware of the weather conditions that favour the fungus responsible for causing ramularia leaf spot, as they have the biggest effect on the disease’s impact.

Ramularia – which has the ability to go undetected for much of the season – needs moisture in the leaf to grow inside the plant, making warm and wet conditions perfect for its development.

Minimising crop stress and maintaining optimum plant health can also help to reduce the impact of ramularia, with flowering often being the trigger for the fungus to start producing the toxins responsible for the characteristic brown lesions.

“Flowering is a stress in itself,” he says. “It causes changes in the plant physiology, with the environmental conditions then determining the level of symptoms seen.”

Warm, wet weather at this timing is ideal, which is why both 2019 and 2020 resulted in low levels of the disease. Those dry conditions won’t necessarily be repeated this year and ramularia is notoriously difficult to predict and identify, Dr Havis warns.

“While continued dry weather doesn’t suit the fungus Ramularia collo-cygni, the opposite works in its favour,” he acknowledges. “Keeping an eye on the season is really important.”

Following the withdrawal of chlorothalonil at the end of last May, growers will have to make changes to their fungicide programmes.

The chemical options are limited, as ramularia has developed resistance to the strobilurins and both the azoles and SDHIs are much less effective than they were.

Up until last year, including 1 litre/ha of chlorothalonil at the T2 timing was the preferred approach, as protectant fungicides applied at the booting or “awns peeping” stage (growth stage 45-47) are required.

New products in development are on track and should be on the market in the next year or so, reveals Dr Havis, which will expand the options and choices available for ramularia control.

In the meantime, SRUC trials conducted in 2019 showed that BASF’s Revystar, which contains its new azole Revysol (mefentrifluconazole) and a strong SDHI in the form of Xemium (fluxapyroxad), gives the best control of ramularia, being ahead of both prothioconazole and folpet.

“We have also seen some activity from folpet and from sulphur,” reports Dr Havis. “What growers need to remember is that where folpet is being used, it is not chlorothalonil. They shouldn’t expect the same level of control.”

He believes folpet should be included with Revystar at T2 as part of an anti-resistance strategy and views it as an insurance component.

“We want equally strong partners in mixes and need to protect the chemistry that we do have. However, it does mean that fungicide costs will be higher.”

Where crops are destined for malting, the Revystar has to be applied by growth stage 45, so growers need to act promptly, he advises. For feed barley, the cut-off is growth stage 69.

Work on the role of biostimulants is ongoing, confirms Dr Havis. “We only have one year’s data, which isn’t enough to form any conclusions or make recommendations.”

Variety resistance ratings aren’t included on the AHDB Recommended List and all varieties are considered relatively susceptible to the disease. New German lines which appear to be more resistant are a longer-term hope.

“We need genetics to partner fungicides,” he stresses. “We’ve been too reliant on fungicides in recent years.” 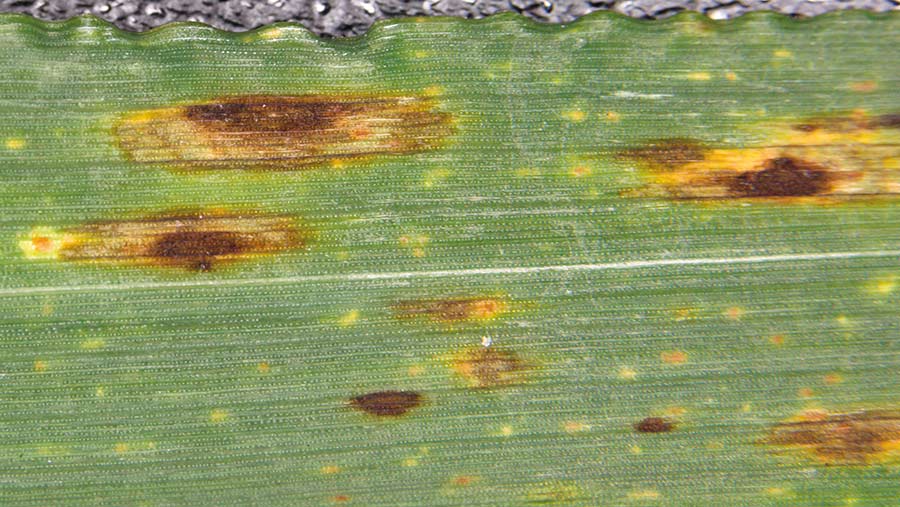 Ramularia symptoms first appear on the upper leaves after flowering. Initially resembling a fine spot, they then darken to a square spot, bounded by leaf veins and surrounded by a chlorotic halo.

To help with identification, the AHDB and SRUC have developed a guide based on the “Five Rs”:

Other diseases, which ramularia is often mistaken for, include the spot form of net blotch and tan spot, as well as physiological spotting.

To distinguish between them, net blotch and tan spot lesions are not rectangular or restricted by leaf veins, while physiological spots leave the undersides of leaves unaffected.

The fungus that causes ramularia grows from infected seed, with most seed stocks now carrying it under the seed coat.

Seed treatments are ineffective – those that are applied as surface dressings don’t get to the pathogen, which is carried deep in the seed. SDHI treatments, which used to have an effect, have now been lost to resistance.

Once the seed has germinated, the ramularia fungus then moves systemically within new plant growth. Visible symptoms are not apparent at this stage, with the fungus seeming to cause no harm.

A secondary spore type has been observed on trash and crop debris, and late in the season these structures produce airborne spores that can also infect plants, volunteers and potentially early autumn-sown crops.

This ability to spread via infected seed, as well as on infected straw and by wind dispersal, together with the rapid development of resistance to fungicides, is why the disease has escalated in recent years.