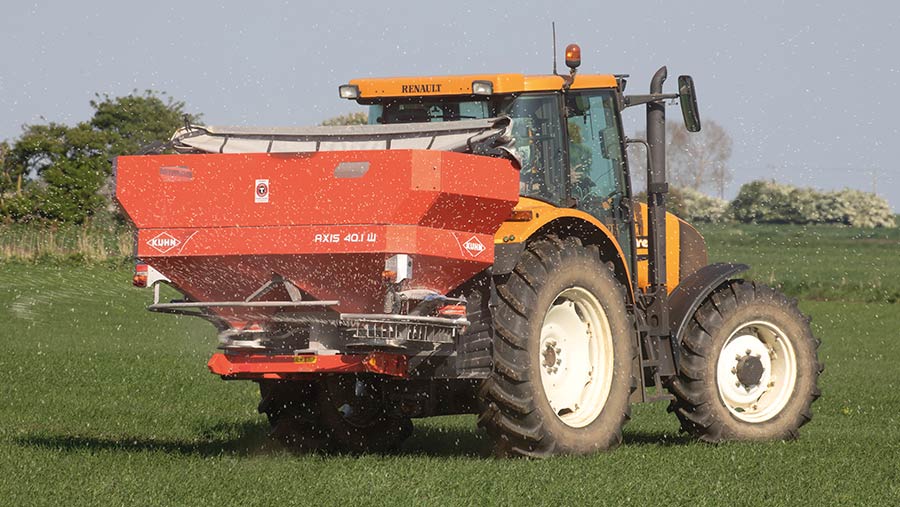 In recent years, cereal yields have plateaued and the key challenge has been driving sustainability in the face of fewer crop protection products, more extreme seasons and growing environmental demands.

Agrii research and development manager Jim Carswell believes improving the nutritional status of crops is central to meeting this challenge.

His solution is a tailored approach. “Feed the plant, not the soil.”

“We know tailored nutrition works, as we have seen responses across so many trials.”

For example, 0.93t/ha responses have been recorded to enhanced nutritional seed treatment in spring barley, 0.47t/ha from better balanced foliar nutrition in winter wheat and 0.54t/ha from wheat with a protected form of seed-bed phosphate.

Mr Carswell is adamant that the best place to start is with a broad-spectrum soil analysis, covering chemical, physical and biological characteristics.

In terms of chemistry, farmers need to get a full picture, so micronutrients are as important as macros.

Laser texture analysis is equally essential to give a picture of physical factors such as available water and drainage rate. Regular Solvita testing can indicate how biological activity is changing over time.

A good example of how a soil test can help when tailoring nutrient inputs is the carbon-to-nitrogen ratio, with high carbon soils needing more N to break down crop residues.

However, while the lab results tell you what is there, Mr Carswell points out that it does not necessarily say what is available to plants. That’s why it is only the first part of his tailored approach.

He recommends getting chemical and biology assessments done yearly, while physical characterisation is only really a one-off.

Drilling day is the most important day in the life of your crops, says Mr Carswell.

“You need to get them off to a good start and maximise early growth.

“Get it wrong, and you can never get the potential you’ve lost back.”

Ideally, farmers should place fertiliser with the seed to optimise early rooting uptake and set crops up for high yields.

But for those without a combi-drill, incorporation in the seed-bed ahead of drilling is recommended.

Out of all the nutrients, phosphate is the most important in setting-up early yield potential, and the key thing is that it must be available, he says.

Cations such as aluminium, calcium and iron in the soil will lock on to applied phosphate, seriously reducing its availability. “The phosphate can be locked up within two weeks,” he warns.

By the time seedlings have emerged and started rooting, then much of any applied phosphate is already unavailable.

He adds that it is a particular problem in both low and high pH soils.

“However, a specialist chelating treatment such as P-Reserve can prevent lock-up for up to six weeks, maintaining phosphate availability.

Manganese is important for early chlorophyll production, while zinc stimulates auxin production and growth. “This leads to better stem extension.”

One trial carried out at Bishop Burton College with wheat in a high P index soil showed a 0.81t/ha response to triple superphosphate (TSP) protected with P-Reserve plus manganese.

The protection also meant the Agrii team could see the benefit while only applying half the total amount of TSP.

Mr Carswell says phosphate is also needed at the end of the season for maturation, helping with specific weight in cereals.

“So, you not only see better yields, also better bushel weights with less screenings in barley.”

There is also some evidence of enhanced levels of micronutrients when using P-Reserve.

He believes the treatment is also protecting other key nutrients, such as copper, boron and zinc, from reduced bioavailability.

For farmers who don’t have combi drills, nutritional seed treatments are a valuable alternative.

Seed treatments offer better nutrient placement around the roots, helping to fill the “hunger gap” until four to six weeks after drilling, when the root system starts becomes really active.

Nutritional seed treatments also help combat the unavailability of nutrients arising from lock-up in situations such as:

Of the three, he says copper “is the interesting one”. He believes it should be supplemented more.

Copper is important in photosynthesis and respiration.

“It is also important for pollen formation and fertilisation so helps grain set.”

Zinc is one of the more common, low-level nutrients and helps auxin production.

“If crops are a bit backward, putting zinc on can help overcome this.”

In a total of 100 Agrii spring barley trials carried out across the UK between 2016 and 2020, positive yield responses were seen with i-Man (manganese) treatment in 74. Some were as high as 1t/ha.

Overall, in 2019, up to 0.93t/ha of extra yield was seen from using these seed treatments in trials on six iFarms across the UK, from Norfolk to Aberdeenshire.

Once you get to spring, crops may have endured a wet winter with higher levels of leaching. So what residual nitrogen is there left in the soil?

N-min tests have been around for a while, but Mr Carswell says they are a useful indication of what nitrogen is available, especially in:

For example, one site near Fife has seen huge seasonal variation in soil nitrogen levels over the past seven seasons.

With the higher levels, there is scope to make savings on fertiliser inputs.

“Knowing what N is available in your soil each spring is really important in ensuring the most economic and environmentally responsible fertilisation.”

Applying nitrogen, potash, phosphate and sulphur for optimal production needs to be done at the right time and in the right way to avoid losses and maximise benefits.

There are slower-release urea products with nitrogen in the ammonium form.

“Here, inhibitors are crucial as they enable fewer passes and cut ammonia losses to the environment.”

Volatilisation is a problem with urea when applied in the wrong conditions (dry, warm) and this can be reduced with urease inhibitors.

The enhanced product gave 40% less nitrate in solution six days after application at 10cm. Levels were half that of standard urea at 11 days and 60cm depth.

Splitting P and K applications between autumn and spring led to increased yields in trials carried out with winter wheat last season.

The crop is growing strongly, so how do you keep it going as well as possible through the spring and into the summer? That is where tissue testing comes in.

While no-one should base nutrition programmes solely on the “snap shot” of tissue testing, Mr Carswell sees it as a very useful tool for correcting any problems arising in season.

Especially with the benchmarking approach, his Agrii work with Landcrop has developed to give a more accurate picture of the sufficiency of the 12 key macro and micronutrients.

Work has been carried out to determine the target levels at different growth stages.

“Also, do higher-yielding crops need higher levels? The answer we found in trials was very much so.”

On the enhanced tissue analysis reports, the actual value is plotted against the two targets – a UK average for a 8.5t/ha crop and a best practice value for a 11t/ha crop – at each of four growth stages.

“This way we can see exactly what the crop needs in relation to both its development and potential,” says Mr Carswell.

As a minimum, farmers should aim for pre-T1 and pre-T2 tissue testing. A pre-T0 test is also useful.

This approach allows foliar nutrients to be added to the spray tank as required.

Field-scale Agrii trials with 18 crops of winter wheat in 2019 saw a 0.47t/ha response to getting foliar nutrition right.

Twelve trial crops of spring barley yielded 0.17t/ha more and there was a 0.93t/ha yield uplift in 14 winter barley trials

“The seed treatment appeared to lift the potential, so when we added the foliar element, it resulted in a 0.84t/ha yield boost against just 0.23t/ha without the initial nutritional support.”

This is a very useful tool for highlighting any problems in previous strategies – looking forward by looking back.

Mr Carswell points to work carried out on one iFarm from 2014 to 2019, looking at the nitrogen-to-sulphur ratio.

Correcting a ratio that was historically too high by applying extra sulphur resulted in a valuable uplift in winter wheat yield.

“Recent grain testing at another iFarm suggested zinc needed looking at, so we have been addressing this.

“Conversely, the analysis shows good levels of phosphorus, potassium and magnesium, so we know we have been getting these right.”