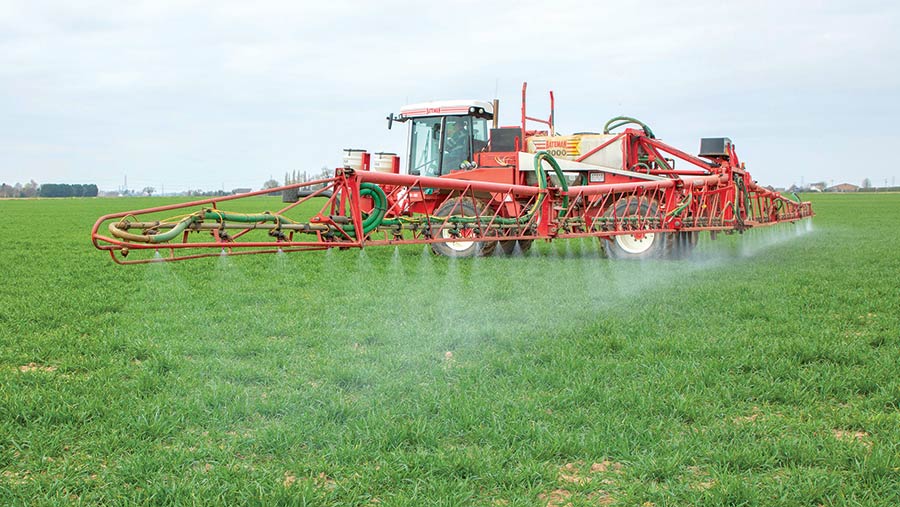 Wheat growers are being warned to be extra vigilant for signs of yellow rust this spring, even where varieties with seemingly good disease resistance ratings are being grown.

New yellow rust races found following the testing of samples by UK Cereal Pathogen Virulance Survey (UKCPVS) sent in during 2019 appear to confirm what many already suspected and add to the complexity of existing, highly diverse rust populations.

While work continues to assess which varieties are most at risk from the 10 new strains identified, there is every reason to be wary and not rely on the resistance ratings given to popular variety choices.

That is because these ratings are an indicator of average UK performance from previous years, so they are only as up-to-date as the testing system allows.

As a result, they can be subject to change within a season if new races with the ability to overcome certain resistance genes occur.

In common with other diseases, yellow rust ratings are reported on the AHDB Recommended List for all varieties, using a simple scale from 1 (least resistant) to 9 (most resistant).

At present, 63% of current wheat varieties are highly rated for yellow rust, with either an 8 or 9.

However, a footnote on the latest Recommended List for 2020-21 stresses that these are national average figures and that all varieties should be closely monitored, as higher-than-expected levels of yellow rust were seen on varieties in some trials last year.

With the highly dynamic nature of yellow rust populations also being highlighted by the AHDB, there is no room for complacency.

An added dimension for growers and agronomists to get to grips with in 2020 is regional variation, after very localised outbreaks were recorded last year including different experiences within the same county.

Of the new strains found, there was no correlation with location – meaning that researchers can’t predict where they will pop up in 2020.

As Amelia Hubbard of UKCPVS explains, new races can emerge sporadically and may not be uniformly distributed, which is what she believes was seen in 2019.

“That means we can expect them to spread in 2020. Your local rust population may be very different to those in other parts of the UK, but even local experience can’t be completely relied on.”

One pathotype of particular interest is similar, but not the same, to the Hereford race of yellow rust, which was initially seen in Sweden in 2015 at a low frequency.

The first time it has been detected in the UK, this strain has now been taken through for both seedling and adult plant resistance testing on Recommended List varieties.

That explains why there were no major changes to disease ratings on the 2020-21 Recommended List, with just three varieties slipping by one point. These include Zyatt, Bennington and Viscount.

“At UKCPVS, our first step is to identify populations changes,” she explains.

“From there, we then identify the risk associated with any changes, which means doing variety seedling and adult plant tests.”

While there are only nine wheat varieties that have seedling stage resistance, there are many more which have adult plant resistance.

As the name suggests, this only operates at the adult plant stage.

“Adult plant resistance differs between varieties and seasons,” she adds.

“It’s not as well understood as seedling resistance and may also be influenced by environment and plant tissue.”

As a general guideline, she says that it is effective by growth stage 39, but stresses that the mechanism varies between varieties.

“Many growers aren’t prepared to take the risk of waiting for it to kick in.

“Given what we saw last year and what we have since learned, that seems very sensible.”

Wheat varieties with a 9 rating and no yellow rust at the seedling stage:

The later-drilled crops that many growers are dealing with this year may have a lower risk of septoria, but small plants are known to be more susceptible to yellow rust, warn agronomists.

The disease is already being found in fields, after a mild winter and plenty of green material to survive on, prompting discussion about the best way of preventing its spread.

“One of the most common questions we get from farmers is whether early-stage development yellow rust matters or not,” says Zantra’s technical director Chris Bean.

“After what they experienced with some varieties last year, that’s not easy to answer.”

Results from the company’s trials last year mean that he will be keeping a close eye on Zyatt, as well as being more cautious with Firefly, Gleam, Shabras, Spotlight and Dunston than before.

“There were differences in variety susceptibility between our trial sites, which emphasises the value of having information from local trials when it comes to managing varieties.”

For many of the late-drilled situations, the early T0 spray isn’t as relevant this year, he acknowledges, but there could be an exception when it comes to yellow rust.

“It might be important this season. We’ve previously seen good responses from a T0, even in a low disease year, where the results were driven by rust.”

If the T0 and T1 sprays are going to be combined, growers should consider adding a strobilurin to the azole/chlorothalonil mix.

“You may not need an SDHI, but the strobilurin will add in rust control and perform a greening function.”

Mr Bean’s other point is that the lower leaf layers deliver more yield in more open crops, so looking after them becomes essential for protecting yields.

That is something that Dick Neale, technical director at Hutchinsons, agrees with, pointing out that there are crops that will only have five leaves this year.

“Small, backwards plants are going to have half the leaves that they normally would and the light will be able to get right down through the canopy.

“So you need to look after all of them as you can’t afford to lose any leaf.”

He also points out that juvenile plants get yellow rust and that adult plant resistance will arrive later in small, backwards crops.

“We’re in a situation now where we can’t rely on yellow rust ratings, especially where the variety is widely grown.

“For that reason, I am recommending a T0 spray this year, as rust is not difficult or expensive to control.”

Mr Neale advises an application of tebuconazole at growth stage 30, which he predicts will be early to mid-April.

“It’s cheap and effective. If you let yellow rust get in at the outset, you tend to be chasing it for the rest of the season.”

A suitcase-sized mobile laboratory using genomic techniques to determine what strain of yellow rust is present in the field has been developed at the John Innes Centre.

Known as Marple, it works by extracting DNA from an infected leaf and allows rapid diagnostics and surveillance of the rust pathogen, producing a result within two days.

As Diane Saunders explains, the technology is portable and can be used without electricity or the internet, with the back of the car proving suitable for its operation when trialled on farms in Ethiopia.

“Knowing what strain of yellow rust you are dealing with allows you to take the most appropriate action,” she points out.

“Previously, you had to wait two to three months for the results from any sample.”

Having real-time diagnostics is step forwards and the plan is to incorporate it into the UKCPVS work, speeding up the time taken to determine which varieties are likely to be affected by new races.