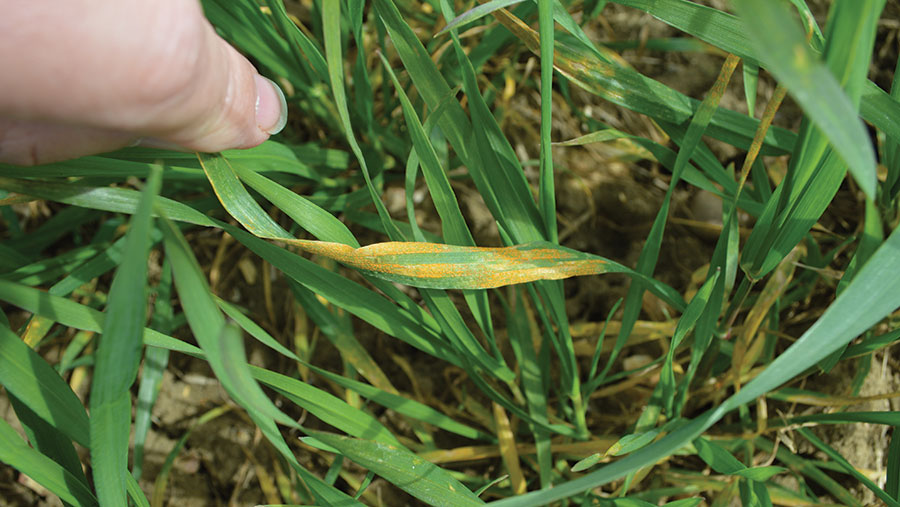 Growers can more precisely target their fungicide spend to manage septoria, by having a better understanding of how wheat variety choice and drilling date affects the risk from this costly disease.

Recent years has seen a shift in what farmers want from wheat varieties with disease resistance becoming more important rather than just yield.

This trend is reflected in the latest certified seed stats showing two-thirds of varieties currently being grown have a septoria rating of 6 or more.

There are now only two groups of systemic septoria active fungicides – azoles and SDHI – and growers are about to lose the protectant chlorothalonil.

Bayer commercial technical manager Gareth Bubb says, in the past, growers had big varieties like Santiago and they were able to get very high yields by managing disease with chemistry.

“However, farmers are finding it is not the case anymore.” They are struggling to keep septoria out, even with full fungicide programme.

Therefore, growers are having to adopt cultural controls, like varietal resistance, along with chemistry to keep on top of the disease.

Septoria control is all about identifying risk and there are several factors, says Mr Bubb.

One is rainfall between April and June, but by the time a grower knows it is a high risk, it is too late in the season so they can discount this.

That leaves varietal resistance and drilling date. For example, the highest risk situation is drilling a variety with a low rating in September, as later drilling reduces the septoria risk.

To help identify the ideal fungicide programmes for different varieties and drilling dates, Bayer and KWS have being jointly carrying out a series of trials at Callow, Herefordshire.

Adas trials some years back looked at three varieties with a spread of resistance ratings: JB Diego (5.5), Santiago (4.5) and Revelation (6).

It looked at levels of septoria in June (3-4 weeks after T2 timing), and there were the expected differences between varieties for untreated yield.

However, moving from mid-September to mid-October drilling, saw a big reduction in risk. In fact, combining resistance (Revelation) and later drilling saw the least pressure on fungicides, says Mr Bubb.

In contrast, mid-September sowings of Santiago saw a significant amount of septoria, even when using a high fungicide programme.

Mr Bubb says the key message is to start drilling with Revelation at the end of September, then JB Diego and the weakest one last.

“With Santiago, you may struggle to control septoria with chemistry alone so the two cultural controls help.”

The question addressed of how much time does varietal resistance buys you was looked at in Bayer trials in 2017.

The company looked at Siskin (6.6), Revelation (6) and breadmaker Trinity (5.5), and mimicked the T2 spray being delayed by 10 days, which can happen on farms.

Both Trinity and Revelation saw significant disease levels in 10 days’ time, but Siskin was not as affected by the delay.

Mr Miles says if the T2 is delayed by 10 days with Trinity, then you have lost the battle as there was a lot of septoria infection. Whereas for Siskin, varietal resistance is still protecting it.

“So the message is, in real farm T1 and T2 situations, spray Trinity first, while Siskin will give you time and flexibility.”

Since the trial, growers have seen the arrival of newer varieties with Extase and Gleam giving farmers more flexibility.

They then looked at the effect of drilling dates on Trinity and sampled leaves at the T2 timing.

“We saw a huge amount of septoria in early drilled (22 September), much more than in later drilled (2 October) Trinity.

“So with early drilling and a delayed T2, you are up against it,” says Mr Bubb.

Callow trials last year looked at varieties with a range of septoria ratings and three different level of fungicide programmes.

One surprise finding was the response Extase showed to fungicides with a 1t/ha lift.

Results also showed that there is scope to cut back on rates in low risk situations.

For example, growers can cut rates for a resistant variety drilled late and apply 0.8 litres/ha of Aviator at the T1, and 1 litre/ha of Ascra at the T2 timings.

This is down on 1 litre/ha of Aviator and 1.2t/ha Ascra, at the T1 and T2 timings, respectively, in a high-risk situation.

While some growers may be tempted to go further and drop one SDHI, Mr Bubb warns that using these fungicides takes the pressure off azoles as well as protecting the genetics.

Should I only grow varieties like Extase with a rating of 6 or higher?

Opting only for varieties with a septoria rating of at least 6 means growers will be losing out on some other good varieties.

For example, Skyfall and Skyscraper, the highest yielder on the current Recommended List. In fact, Skyscraper only has a rating of 5.

These varieties can still be grown by managing the septoria risk. One way to mitigate the lower rating is to reserve them for the later drilled fields.

“These could fit in the later drilling situation after lifting roots.”

“You roughly see a 0.5 difference in septoria rating for each fortnight. So a variety with a 4 or 5 rating behaves more like a 6 or 7 when drilled in November.”

So Firefly (rated 7) drilled early is down to a 6, while Kerrin (5) drilled towards the end of October will be more like a 6.

”Farmers are still making a saving by cutting rates,” he says.

One example is Firefly, which is a good early driller being stiff stemmed and has a 7 for septoria.

But in a higher risk situation (drilled in September), it may still need 1 litre/ha Aviator at the T1 and 1.2 litres of Ascra at the T2. This shows you can’t just have a fixed fungicide programme for a particular variety.

Mr Miles adds that even Extase may need two SDHIs (T1 and T2) in the west, if drilled in early October. In the east, Extase drilled at the same time may only need an SDHI at the T2.

Tank mixing products with different modes of action is a key part of anti-resistance measures for fungicides, and it is also important for protecting varietal resistance.

Mr Miles says that major gene resistance for septoria is not infallible. He points to the example of Rlm7 phoma resistance in oilseed rape, which has broken down in parts of France.

There are two parts to disease resistance – major genes, which are incredibly strong but can breakdown, and minor genes.

Looking at the Recommended List as a whole, there has been an upward trend for septoria ratings over the years, and this “incredibly good foundation” is the result of many minor genes, he explains.

Then there are a number of stand-out varieties that have elevated scores, which is down to a major gene. One example is the much-talked about Extase.

The minor genes get you up to a 6, but you need major gene resistance to take varieties above that.

There have been resistant varieties before, such as Warrior and Stigg, but they have also had a yield or quality problem, so were limited in their uptake, says Mr Bubb.

Mr Miles points out that resistance mechanisms use energy. For example, Santiago had the highest yields as all its resources went into grain production.

However, the arrival of Extase breaks that linkage offering high yield and very good septoria resistance.

While they are useful varieties, they are not infallible and there is a need for anti-resistance measures to protect these varieties, he says.

Mr Bubb says the reverse is true. “Growers need to choose the right variety to keep pressure off the chemistry.”