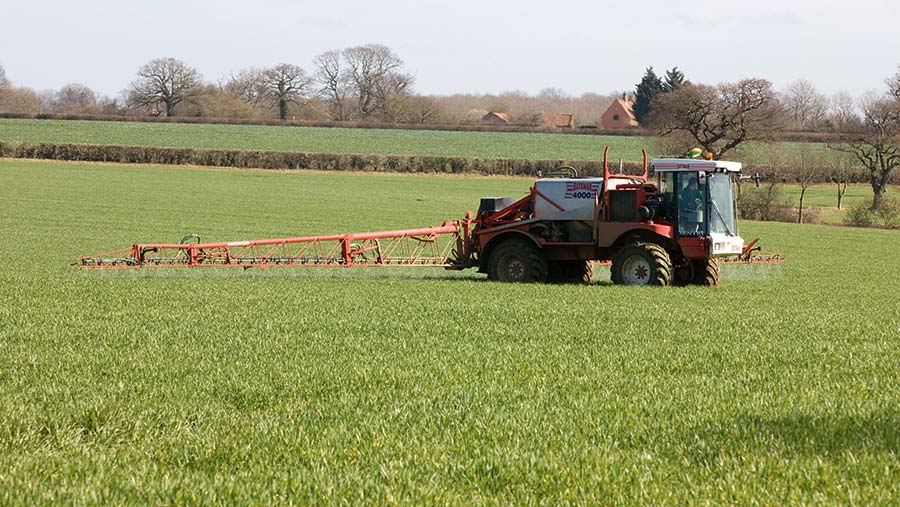 Knowing a wheat variety’s weakness is essential when considering fungicide strategy, especially as some popular varieties are proving to be noticeably weaker against rusts than their AHDB Recommended List ratings would suggest.

“Septoria tritici is present, but disease levels are not too bad at the moment,” he says.

However, it could still prove a tricky spring because of the unseasonably warm spell in February. Many crops received very early fertiliser and the resultant lush growth may bring an increased risk of disease and lodging.

So how do growers manage these crops in the coming weeks to maximise their potential while watching their costs and without greatly adding risk?

Mr Lloyd believes the varietal data in the Agrii Advisory List, published to complement the AHDB Recommended List, can help farmers manage this risk when planning their fungicides. For example, the risk of dropping a T0 will vary greatly between varieties.

Based on certified seed sales, just seven varieties account for half of the crop currently in the ground (see box). What’s important is that they have very different fungicide responses.

The most widely grown varieties this season

Looking at last year’s data from Agrii’s national and regional variety trials, there was an average response of 1.7t/ha to the standard four-spray programme. This compares with 3.4t/ha the season before.

Interestingly, though, within the seven most widely grown varieties, Agrii saw responses ranging from 0.75t/ha for Siskin to 1.5t/ha for Gravity.

There are also regional differences and interactions with varieties. For example, in the East, Siskin and Gravity gave a similar yield response of about 1.3t/ha. However, in the west, there was a 0.8t/ha difference in their responses.

He says the reason is that in the east, rusts are driving responses while in the west it is Septoria tritici and Gravity is weaker on this (AHDB score of 5.0 versus 6.7).

So armed with variety data, farmers can tailor their inputs. For example, Graham can cope without a T0 in terms of Septoria, but is weaker on brown rust so care is needed in higher risk areas.

Mr Lloyd also warns that not all yield responses are down to disease control, so farmers could lose out on other benefits such physiological greening.

Mr Lloyd points out that while the AHDB Recommended List data is useful, it does not tell the full agronomic story. That’s why he likes to view them alongside results from Agrii screens which push varieties harder under more commercial conditions and assess disease, in particular, on the most recent season’s performance (see panel below).

Both the AHDB and Agrii data agree on septoria resistance ratings for the seven varieties.

Crusoe is known to be weaker on brown rust, with an AHDB rating of 3.0, and growers have still been able to achieve high yields with the right fungicide programme.

But what the AHDB list doesn’t tell farmers is the risk with a variety such as Kerrin, which according Agrii data is nearer 4.2 than the 7 on the AHDB list.

For varieties with a brown rust weakness, he suggests using an SDHI that is strong on the disease, like Solatenol (benzovindifupyr), at T2. Also be careful when thinking about cutting out the T0.

“While brown rust is a late-season disease, if it gets in early it can be difficult to manage,” he says. “Brown rust infects deep in leaf axils and is difficult to get at with sprays.”

But this weakness can easily be managed and Kerrin will perform. “It is good second wheat in trials and yields well. Grain quality is fine and the disease profile is pretty good.

A good example here is Skyfall, rated on the RL as a 5 for yellow rust, although Agrii data suggests it is a 3.4.

Yields are okay and it has good grain quality and a premium market. It also has orange wheat blossom midge resistance, can be drilled later and for those with blackgrass, it is very competitive.

However, yellow rust is not so good and this can be managed by using an azole at T0 and following up with good rust fungicides at T1 and T2. The key here is to “mind the gap” with a maximum of four weeks between each spray timing.

Four out of the seven varieties are noticeably weaker in the stem in Agrii trials (more than 1.0) than the RL suggests. One example is Siskin untreated – 5.0 versus 6.2.

Mr Lloyd’s advice is that if you don’t drill it early and have a robust plant growth regulator programme to help keep it standing, it will perform well

A key difference is that Agrii’s variety trials push varieties harder to see what they are capable of in higher-pressure situations.

In addition to the 15 regional variety screens, there are dedicated lodging trials on the Cambridgeshire fens and on very fertile soils in Lincolnshire to push straw strength. There is also a septoria nursery in South Wales and a rust nursery at Throws Farm in Essex.

The result is that the Agrii disease and lodging ratings represent a worst-case scenario.

Another key difference is that the disease scores are based on the previous season’s data only, and not simply rolling averages. “This helps pick up any changes in resistance status early on,” says Colin Lloyd.

“For example, we saw Diego breakdown to yellow rust on only one site initially and it was UK-wide the following year.

“These rogue results are an early barometer of changes, so we can give advice in the following season like be careful with yellow rust on Diego in the year it went.

“If a variety has a weakness in one area, you can manage that. It doesn’t mean it is a bad variety – you just don’t want surprises.

Mr Lloyd points out the trouble with averaging. “If you average the averages over an average number of years, you may end up with an average variety and miss out on one better suited to your situation.”

For example, Dunston gets lost on the Recommended List when looking at yield, being 3% behind the top yielding hard group 4. “But it is a good variety which ticks the boxes like Diego did,” he says.

It has good grain quality and straw strength and is good in grassweed situations, being rated very competitive in Agrii trials. It is weaker on rusts than the RL suggests, but farmers can manage this by adjusting fungicide programmes.

At the request of growers, Agrii is planning to add straw yield ratings to its Advisory List in addition to current ratings for grassweed competitiveness, yield consistency, resilience under disease pressure and several other valuable measures.

The company has adapted a plot combine to weigh straw. Mr Lloyd says one interesting feature is that it is not necessarily the tallest varieties that produce the most straw, as they vary in stem wall thickness.