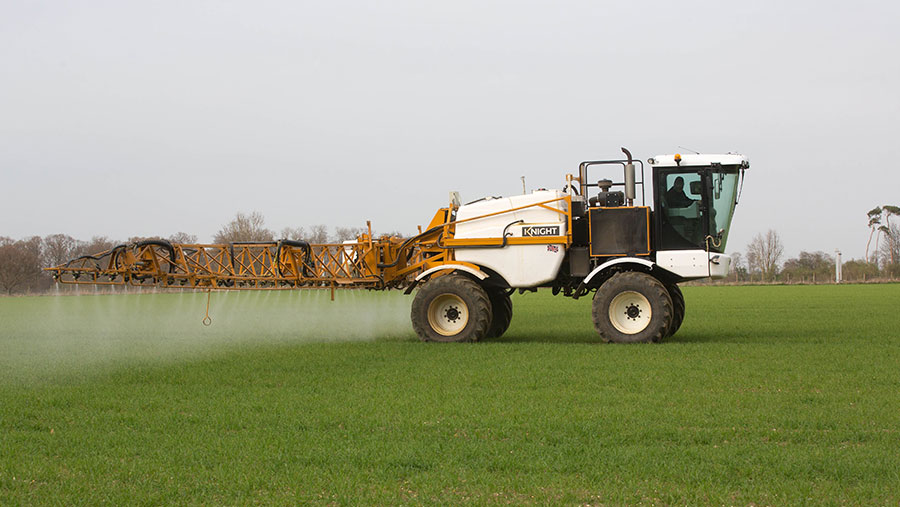 Winter wheat growers who haven’t applied their first fungicide spray are being urged to consider leaving it out and applying a more robust follow-up spray in the coming weeks.

The extremely wet start to 2018 has led to very soft soil conditions, meaning that despite the temptation, growers have been unable to venture out into fields with tractors and sprayers.

As a result, few growers have managed to get their first T0 fungicide spray onto their wheat. It is used to control rust diseases and protect against septoria, and is applied when leaf four is fully emerged.

The optimum time for a T0 application is usually late March/early April and T1 is often late April, but the reality of getting both sprays applied at the correct time and allowing a three week-plus interval between each is unlikely in this late, wet spring.

See also: How the two new fungicides perform on farm

Paul Fogg, crop production specialist at advisory group Frontier, believes some growers should choose to miss out their T0 spray.

“There will still be some farmers who will be looking to get T0s on and others who will now decide to forget it, in order to put a stronger T1 on. For those who are committed to applying a T0 and are able to travel on fields, I would say stick to plan A, but only if they’re able to apply spray no later than next week,” he said.

Dr Fogg also explained that the timing of application for T1 is of far greater importance than T0, with the cold weather having reduced prevalence of yellow rust on this season’s crops. The timing for a T1 spray is when leaf three is 75% emerged.

“Timing is key in terms of the whole sequence of events. Although yellow rust is not as serious at this moment in time, there is significant septoria building, for which I would recommend a T1 spray consisting of an SDHI, a triazole and a multisite,” he added.

Also expressed was the importance of growers carefully monitoring each of their crops for outbreaks of disease, as despite the significance of yellow rust being depressed by the weather, reports of the disease are beginning to filter through.

Will Foss, agronomist at fellow advisory group Agrii, said some winter wheats in his Cambridgeshire area are so behind they’re not even at the T0 stage yet.

“A lot of crops here were late drilled due to blackgrass problems and growth has been slow due to the weather. Leaf four is just a third of the way out,” he said.

His message to growers in similar positions is to not panic and even if they miss out a T0 spray, they shouldn’t rush into applying T1 sprays.

“If you go in too early with a T1, you could see disease implications further down the line. Another option could be working back from a T2 flag-leaf spray in late May. Allowing a two to three-week interval, this takes you to early May for a T1, meaning there is still time for that T0 to be applied,” he added.