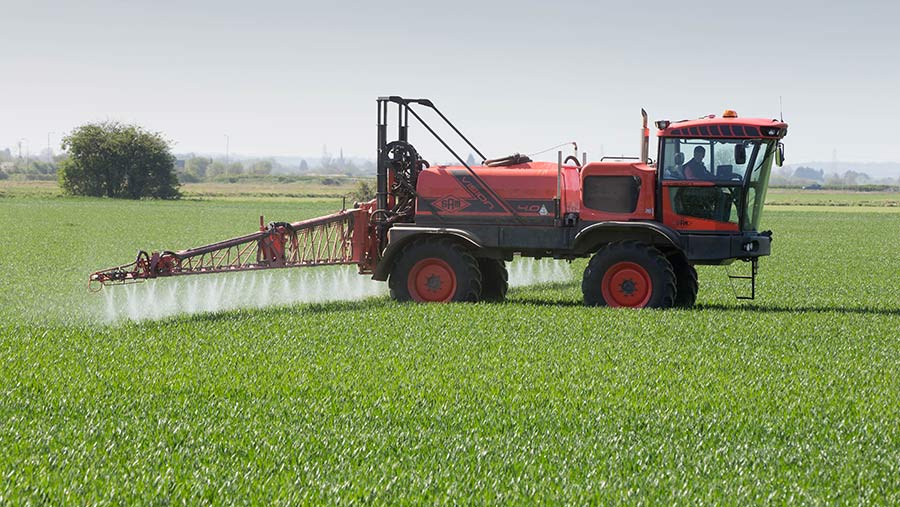 A new wheat fungicide to be launched this spring is giving a near-0.4t/ha yield advantage in a series of on-farm independent tramline trials, organised by crop consultants Adas.

The new azole-SDHI combination was seen to reduce the severity of septoria disease, give a greening effect to wheat, and gave a yield response when applied twice in a growing season.

The new product called Revystar from agrochemical giant BASF was tested on a number of sites and compared with the normal farm standard fungicide programme.

The new azole-SDHI combination contains a new azole Revysol plus Xemium the same SDHI fungicide used in Adexar and Librax.

Pete Berry, head of crop physiology at Adas, says the new product was used at both the two main spray timings of T1 and T2, with no trial using the multisite chlorothanol as this fungicide will be banned from May onwards.

“A two-spray programme using Revystar gave a 0.39t/ha yield advantage across 21 trials when applied at T1 and T2,” he says.

“With septoria bubbling around, we might use Revystar in a more normal year at T1 to give a good clean start,” he adds.

The farming group, owned by Sir James Dyson, farms about 14,500ha in Lincolnshire, Oxfordshire and Gloucestershire.

Steve Dennis, head of business development at BASF, said the azole Revysol is active on some septoria strains which other azoles can not control.

The price of Revystar is not being revealed, but after spending 250m euros to develop the Revysol azole molecule, the company says there will be an “innovation premium”.

The experts were attending a recent BASF Real Result meeting looking at Revystar, and held at Beeswax Dyson Farming in Lincolnshire.