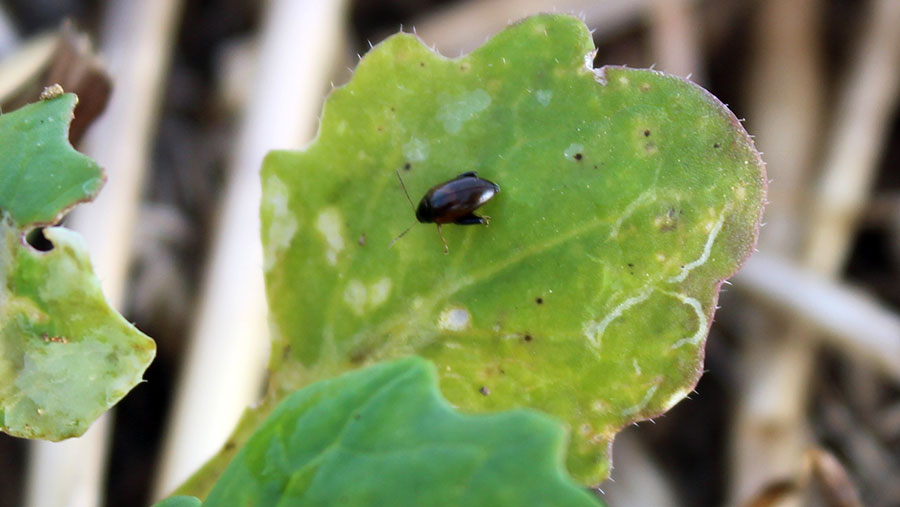 The latest “emergency” application to allow neonicotinoids on oilseed rape should be refused, according to government advisers.

Two applications for the use of Cruiser OSR and Modesto as neonicotinoid seed dressings on oilseed rape were considered by the UK Expert Committee on Pesticides (ECP).

The applications were made in a bid to control cabbage stem flea beetle (CSFB), which UK growers say has devastated rape crops since neonicotinoids were banned in 2013.

Studies have suggested that neonicotinoids are damaging to pollinators – although the NFU and agrochemical companies dispute these findings.

Committee members were asked to consider the proposed authorisation of enough product to treat 67,760ha of winter oilseed rape.

Split evenly between the two products, this crop area would be equivalent to 11.2% of the oilseed rape grown in England in 2015.

The requested area was based on Agriculture and Horticulture Development Board estimates that 14% of the crop area suffered moderate flea beetle damage at emergence in 2015.

The application, which was considered by the committee earlier this month, differs from similar requests submitted in 2015 and 2016.

It proposes targeting the use of neonicotinoid-treated seed at areas subject to “moderate” – as opposed to high or severe – pest pressure.

The committee said it noted that flea beetle could cause economic damage, but it said no data had been submitted to indicate that a “moderate” threshold constituted an emergency.

It said the risk to pollinator health from the use of neonicotinoid pesticides was a high-profile subject and well understood by the committee.

It accepted there was a case for need, but said the proposed approach did not necessarily mean that severe yield loss or crop losses would be prevented by using neonicotinoid-treated seed.

“The application did not provide sufficient assurances the product would or could be used in locations of moderate pest pressure,” said the committee.

“There was insufficient information available to take a view on suitability of the
stewardship arrangements, in particular the adviser training.”

It concluded: “The committee advises that the applications: do not meet the tests enabling an emergency authorisation to be granted; and should therefore be refused.”

Defra ministers are expected to make a final decision on the application in the coming days.